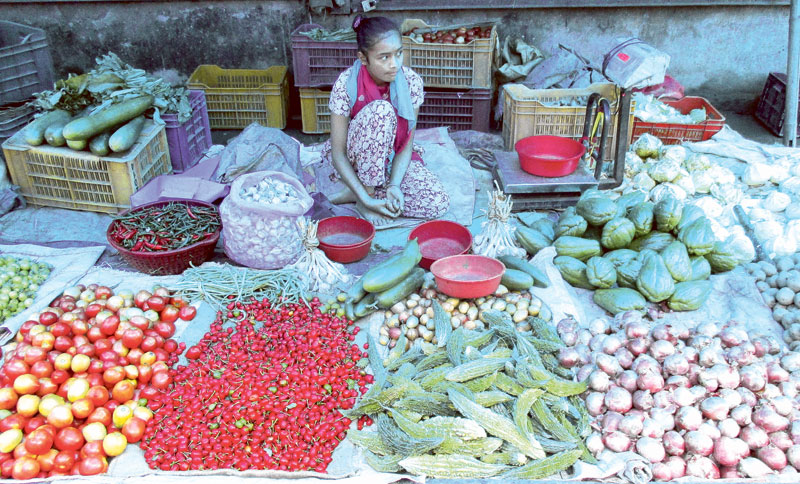 A vegetable vendor in Ilam. In comparison to meat, consumers complain that prices of vegetables have increased manifold.(Republica)

BIRATNAGAR, Sept 24: While Indu Aryal, a housewife, was preparing shopping list for the upcoming Dashain festival, her daughter dropped in room and added few things to the list. Her demands included new dress, a pair of sandal and sunglasses. These additions put her festival budget out of proportions and forced Indu to negotiate with her daughter. She tried to convince her to compromise on some of her demands, but to no avail.

“There is already Kurtha - Surwal listed for her. She has other demands as well. What to do? How to say no to children during Dashain? It's very difficult,” Aryal took a long breath. “Price of everything in the market has skyrocketed. In little time, prices of commodities have grown manifold. Not even food and other groceries remain affordable.”

Inflation is shocking indeed and it has snatched away peace of every housewife in the eastern part of the country. Least aware of and least bothered, as well, about the rising prices in other parts of the country, homemakers here argue that the government has done 'unfair' to people by not controlling prices even during Dashain. “For instance, prices of shoes have been hiked many times than last year. In one year prices have gone out of reach of common people like us. How can the government let this happen?” she asked.

The inflation has put people under pressure. Ramesh Pokhrel, a local politician had to take loan to meet his family's festival demands. “Everything is way costlier than last year. I was simply out of resources to meet the festival's expenses and had no option other than to take loan from friends,” he said. He linked the inflation to the rampant black marketing that flourished during India's blockade and the earthquake and claimed that the national economy was still suffering from their repercussions.

Sujan Thapa, general secretary of Birat Byapar Sangh claimed that the lack of monitoring by concerned government departments has been adding to the woes of the people. “Commodities are being sold at steep prices and there is no one to check them. It's impossible for consumers to know market price of every commodity and in absence of responsible behavior from market regulating agencies, sellers are getting away with the loot, unharmed,” he said.

There are attractive fancy shops in Itahari. Due to the nearing of Dashain, crowd is getting thicker in the market these days. According to consumers, there is no uniformity in rates of dresses, utensils and other items with the same quality. Punam Sharma, a consumer spotted in Itahari maintained that some hike prices just to take advantage of the festival; some others overcharge due to their costlier shutters.

Dashain was bit different last year. Due to agitation in Madhes, there was little mood and liberty to celebrate the festival. The economic blockade had spoiled rest of the things. “That was different time. Of course, things were scarce and costlier due to that. But these should have been reasonable now,” said Sharma. She added that timely monitoring from the local bodies would help consumers in many ways.

Chief Administration Officer of Biratnagar, Mohan Bahadur Chapagain promised “to monitor the market thoroughly and assured that consumers will feel the relief.”

Market price of sugar in Biratnagar is Rs 80 per kg. Edible oil costs over Rs 230 per liter and one kg of rice costs between Rs 45 to 105. But if the consumers traveled some miles near the Indian border, prices fall substantially. “Commodity prices in Jogbani are far below than here. Because of this most people head for Jogbani to purchase commodities,” Sharma said.

Cost of vegetables have sky rocketed. Green leaves, potato, tomato, pumpkin, lady finger, onion and bitter guard, among other vegetables are simply out of reach of general families, consumers lament.

“There is still one week left for Ghatasthapana, but look at the prices of vegetables, you can't buy it,” lamented a consumer Shashi Rimal. “It's like a punishment to people,” she added.

Even the items grown in the district itself are not available at reasonable rates, she adding that it is not the farmers who are getting the profit, it is the middlemen.

“We are buying vegetables at double the rate than in Kathmandu. I do not think vegetables are this expensive anywhere else in the country,” she said.

Meanwhile, Pratima Rimal, a vegetable vendor stated that nothing comes cheap to them. “We also have to buy vegetables at higher prices and we cannot sell at lower rates,” she said adding that vegetables have high demand during Dashain though meat is consumed more.

“Though many people eat meat during Dashain, its prices have remained stable. Despite that vegetable prices soar during festivals because people buy them more than they would use for adding varieties to their festival cuisine,” she explained.

KATHMANDU, Sept 26: The throng of frenzied shoppers rushing about Kathmandu’s market places is a clear indicator of the Dashain festival... Read More...

KATHMANDU, Oct 30: The y-o-y consumer price inflation has increased to 3.9 percent in mid-September this year from 3.4 percent... Read More...