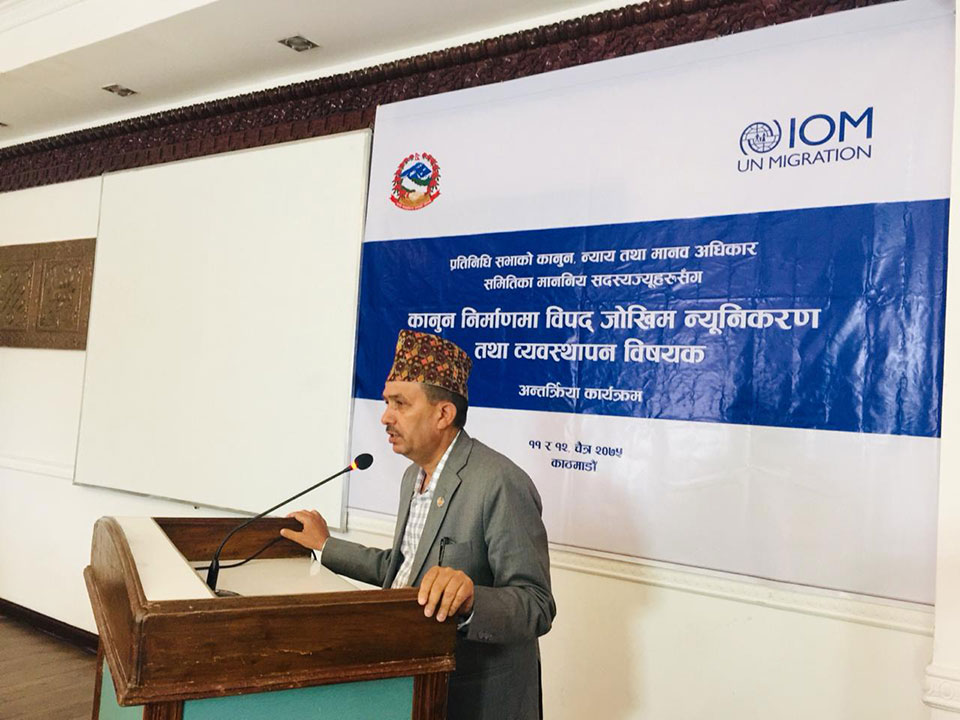 Former Chair of Constituent Assembly and Speaker of the House of Representatives Hon. Mr. Subash Chandra Nemwang along with members of Parliamentary Committee and IOM Nepal officials after the inaugural session of the consultation programme. Photo: IOM/2019

KATHMANDU, March 27: International Organization for Migration (IOM) organized a two-day consultation program to discuss the inclusion of Disaster Risk Reduction and Management (DRRM) into the process of drafting laws in the new devolved, federal structure. Members of the Committee on Law, Justice and Human Rights of the Parliament took part in the event that was organized in coordination with the Ministry of Home Affairs and the Ministry of Federal Affairs & General Administration.

Addressing the Closing Session, Minister for Law, Justice and Parliamentary Affairs, Bhanu Bhakta Dhakal said, "With the amendments made in some Nepal Acts in line with the spirit of federalism and endorsement of DRRM bylaw, there is added responsibility regarding DRRM and contributing in developing a resilient nation. This provides an opportunity to the government to appoint well-versed and capable Chief Executive Officer (CEO) of National Disaster Risk Reduction and
Management Authority (NDRRMA)."

On the occassion, IOM Chief of Mission for Nepal Paul Norton said "Parliamentarians can play a key role in guiding the government in implementing the amended DRRM Act 2017. Cooperation and coordination at federal, provincial and local level is essential to emergency response, as is having a timely preparedness and response plan."

Nepal is among the 20 most disaster-prone countries in the world. In 2015 earthquakes displaced approximately 2.8 million people. Some 117,700 people in the 14 worst-affected districts were forced to find shelter in makeshift camps. 2017 also saw heavy rains resulting in flooding across 35 of Nepal’s 77 districts. Over 190,000 houses were destroyed or partially damaged, displacing tens of thousands of people and leaving many homeless.

Nepal’s new federal structure will see a massive shift of power from federal to provincial and municipal levels of government. DRRM is among 22 areas of government that are now the responsibility of devolved authorities.

The government is currently updating roles, structure, and responsibilities of its disaster management agencies based on the new DRRM Act 2017. This will include significant decentralization for decision making, resources management and service delivery systems.