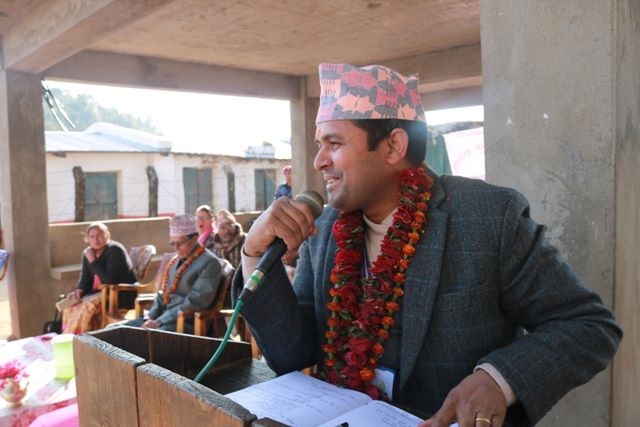 DAILEKH, March 20: Laxmi Prasad Baskota, chief district officer (CDO) of Dailekh, has urged the local representatives not to give donations to the cadres of the government-banned Communist Party of Nepal (CPN) led by Netra Bikram Chand.

By holding a meeting with the representatives recently, CDO Baskota asked them not to encourage the activities of the Chand outfit and also said that he is ready to ensure 24-hour security in the district. A team of government officials along with the district police chief visited Naumule Rural Municipality for a mobile camp organized for the distribution of citizenship certificates.

After reaching there, he called a discussion with the representatives and requested them to discourage the extortion drive launched by the CPN by not providing them money which they demand in the name various activities and taxes.

This was the first time Baskota visited Naumule since the government banned the CPN. "Why will you provide money to by bullets that might kill us one day?" CDO Baskota questioned, adding, "Inform us about their activities and we will mobilize enough security to those places."Some mayors and ward chiefs of Dailekh sought help from Deputy Inspector General (DIG) Mahesh Bikram Sah of Province Police Office after some cadres of Chand's outfit asked for donations and threatened others to resign from their posts.

However, some representatives stated that the cadres of CPN provided financial help for development projects. DIG Sah stated that security has been beefed up in the district to ensure safety of representatives as well as locals. He claimed that the security personnel have also started monitoring the activities of the Chand-led party.

Lamenting that the increasing activities of CPN are a threat to their security and made it challenging for them to work, the elected representatives have demanded to deploy more security force around them. Especially the representatives in the district headquarters have been terrorized by the activities of the Chand outfit.

Locals take to the street against chief administrative officer in Gaur

RAUTAHAT, June 9: Locals of Gaur Municipality on Saturday staged a demonstration against the chief administrative officer of the local unit... Read More...