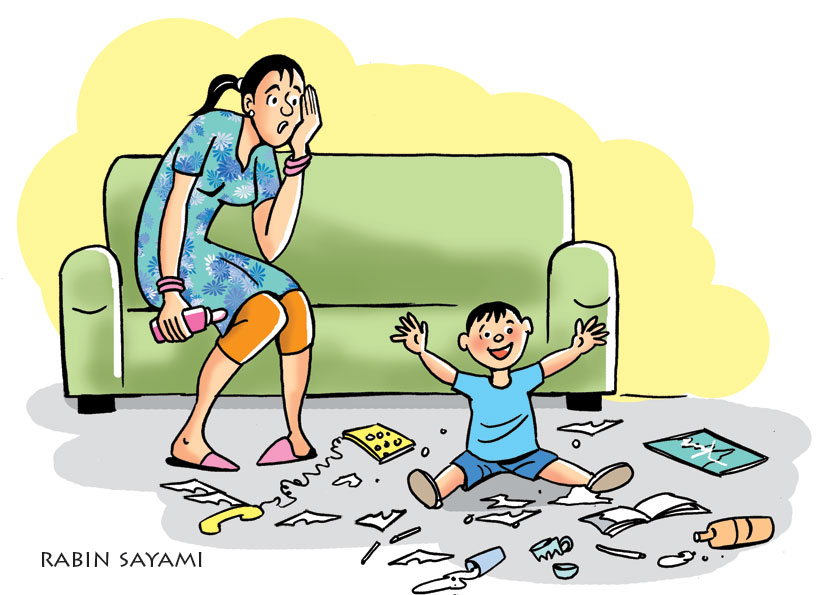 It’s hard to deny the importance of discipline but as any parent will attest, it’s not always easy to enforce these values on your kid.

Recently, while commuting in a fully packed public transport and a six-year-old wouldn’t stop crying. Apparently he didn’t want to sit on his mother’s lap. Despite his mother’s numerous attempts to pacify, distract as well as explain the predicament, the child just wouldn’t stop. His wails grew louder and eventually, he even began tugging at his mother’s hair. Clearly embarrassed by his tantrums the mother decided to give in and got up from her seat so that her son could sit alone just as he wished.

It’s hard to deny the importance of discipline but as any parent will attest, it’s not always easy to enforce these values on your kid. As a parent, one of your jobs is to teach your child to behave and in Nepal Academy of Psychology’s Clinical Psychologist, Alisha Bhattarai’s experience every parent believes they are doing their best. However, there are many cases where the outcomes are less than favorable.

One of the most common expressions parents can be heard saying is, “I don’t understand why my son/daughter is doing that”. While many parents in the past would opt for physical punishment, today there are some parents who don’t feel comfortable with that tactic. So what is the other alternative? This is one of the most burning questions among the parents circle and The Week has tried to get some answers.

Bhattarai from Nepal Academy of Psychology approves the ‘no physical punishment’ movement. As a clinical psychologist, she believes corporal punishment does more harm than good. All families develop their own approach when it comes to raising their children, but in majority of the cases, while dealing with normal children, Bhattarai explains that the parent’s behavior plays a big role in influencing the child’s action. She stresses that this is perhaps the most important thing to understand.

“Children are very impressionable. Their behavior is based on what they see, hear and experience from things and people around them. There isn’t anything like a bad child. If there are some who are misbehaving, chances are parents can correct it by altering their own parenting strategies,” says Bhattarai.

So in case you need a little inspiration, we’ve rounded up some the biggest parenting fouls that might actually be contributing to your child’s lack of discipline.

So today might have been a great day and despite the work load, the household chores and two tots running around, you are in a splendid mood. It’s only natural to let go of some of the things that bother you. However, when it comes to your children, you might want to be wary about this. Bhattarai explains this is a common phenomenon. A parent in a good mood allows some of their child’s mischief to slide by but the same child gets reprimanded for the same action later on when the parent may not be feeling as great. This leads to the child being unable to separate between right and wrong. So consistency is crucial.

There is nothing more mortifying than having your child throw a tantrum in public. She may fall down and cry at a shopping mall or threaten to throw food in a posh restaurant but Bhattarai suggests you bear with the embarrassment rather than cave in to the kid’s “terrorist” tactics. So she highly recommends parents to always think before saying “no”. Consider the pros and cons, if you must because once you have denied the child something, the thing to do in all circumstances is to stick with the decision. We could even take the case in the public transport, the mother, Bhattarai points out, shouldn’t have caved in. This gives all the power to the child and reinforces more misbehavior in the future.

So bottom line: always have a legit reason before saying “no” to your child and once you do, don’t ever change your mind.

Handing out responsibilities have also been proven very effective in enforcing discipline in children’s lives. For example, some parent may think a five-year-old is too young to collect his toys after he is done playing with them. But you would be surprised. A five year old can easily handle the responsibility if he is taught to do so. Again, the parent needs to be in charge here, not the other way around. A parent can firmly and fairly set limits for a child and age shouldn’t be a deterring factor. Letting them off the hook by believing that they will learn as they grow older is a wrong notion that tends to backfire rather spectacularly. As Bhattarai mentioned, children are very impressionable. They might obviously be some resistance initially, but they can’t learn if they are not taught.

Sometimes the biggest mistake a parent can make is to take their children as incompetent and incomprehensible babies. This mainly brings up problems in their communication. They might not know of the world but there are always motives (no matter how silly) to their actions. According to Bhattarai, regardless of your child’s age, a parent should hear his/her side of the story before reacting. There is always a reason behind the child’s mischief and it is always easier to deal with them when you understand them. However, especially in our society, parents have the tendency to react before considering the child’s thought process. This actually does a lot of harm. It’s best to not dismiss their views if you want to tackle their discipline problems.

Again, children’s emotional intelligence should not be underestimated especially when they can be master manipulators. This particularly proves to be a big problem when the child is living in a large family. Bhattarai apparently always makes it a point to remind the parents as well as the grandparents that they all need to be a team while raising a child in the family. A mother’s instructions can’t be overruled by the father or the grandparents and vice versa. There is a big chance that the child will try to get his way from other members of the family and that’s why they all need to stick together. When it comes to disciplining a child, all these small factors can play a big role in bring forth some positive changes.

5 smart ways to teach feminism to your children

So you have decided to raise a feminist in the house. Good for you! But, for something so crucial, the... Read More...

Actor-comedian Amy Schumer loves being a mother, even if parenting can be a little crazy at times. Over the weekend,... Read More...

Parents begin to lose control of children at the age of 13: Studies

Parents begin to lose control of their children at the age of 13, a study has found. ... Read More...

Trump says U.S. election winner might not be known for months
7 hours ago