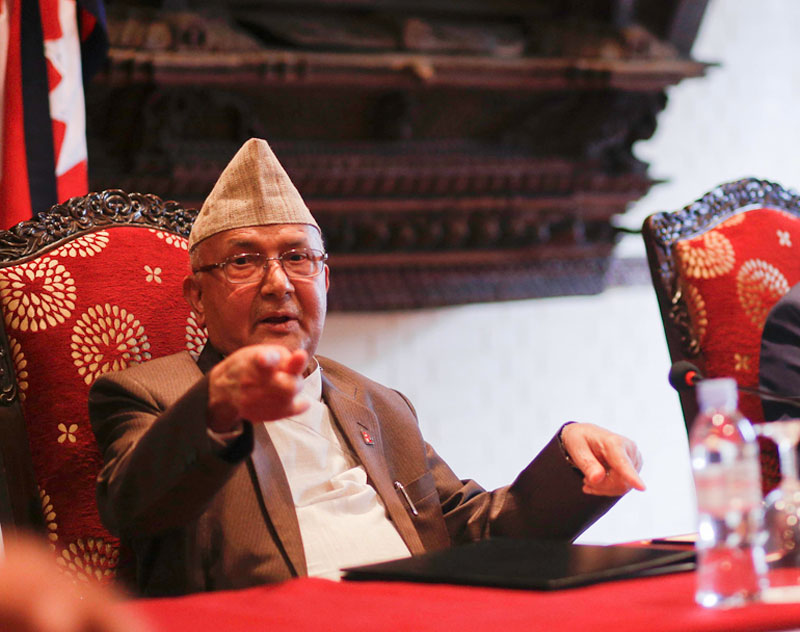 KATHMANDU, March 18: Prime Minister KP Oli has said that he was in no hurry to reshuffle the cabinet. A day after Minister for Physical Infrastructure and Transport Raghubir Mahaseth hinted that he could resign becoming the second minister to give such hint in the last one week, Prime Minister Oli on Sunday dismissed reports of cabinet reshuffle for now. He, however, said that preparations are underway to appoint a new minister at the Ministry of Culture, Tourism and Civil Aviation. The position fell vacant after minister Rabindra Adhikari died in a helicopter accident last month.

“There won’t be any reshuffle immediately,” Oli told reporters in Biratnagar on Sunday.

Oli’s remark comes just days after he intensified discussion within the party to restructure his cabinet. On Thursday, Oli had met with Nepal Communist Party Chairman Pushpa Kamal Dahal to pick possible replacements for under-performing ministers. But the meeting ended inconclusively after Dahal suggested that the plan be put off for until the end of the current fiscal year.

Based on a detailed performance appraisal, Oli is preparing to replace at least six ministers. He has reportedly singled out the ministers in the red zone hinting that they might have to resign soon.

Sources said that among others, Minister for Industry, Commerce and Supplies Matrika Yadav, Minister of Agriculture, Land Management and Cooperatives Chakrapani Khanal and Minister for Youth and Sports Jagat Bahadur Bishwakarma top the list of the ministers in the danger zone. Others in red zone include Minister of Physical Infrastructure and Transport Mahaseth and Minister for Federal Affairs and General Administration Lal Babu Pandit.

The next day, Minister Mahasheth also hinted at his possible resignation, saying he would work for the betterment of Madhes as a member of parliament after he steps down. Neither of the ministers however have said when would they resign.

PM in discussion for cabinet reshuffle