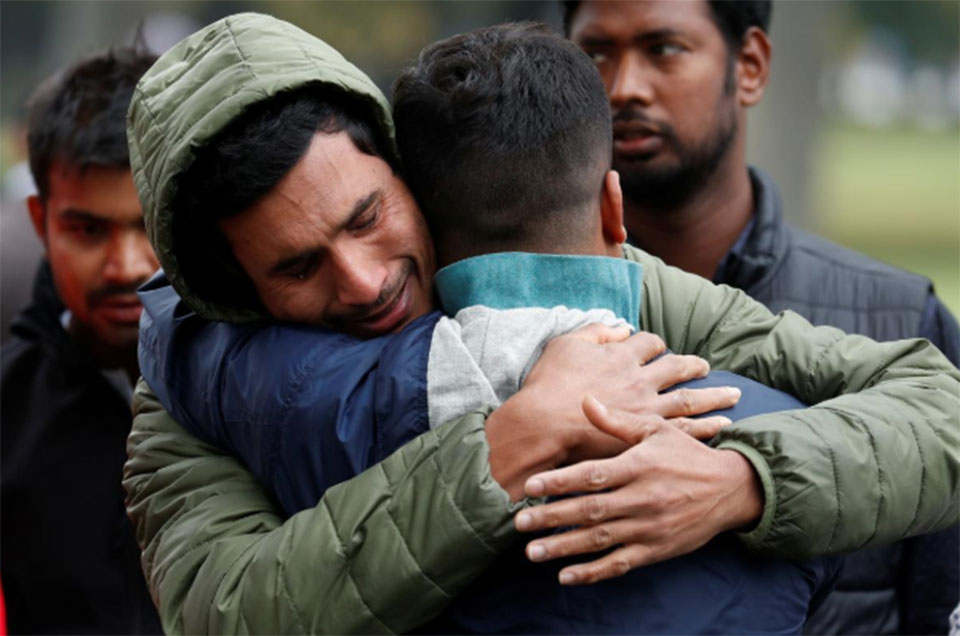 Relatives of a member of the Bangladeshi community wait for news at a community centre in Christchurch, New Zealand, March 17, 2019. REUTERS/Jorge Silva

CHRISTCHURCH/WELLINGTON, March 17: The death toll in the New Zealand mosque shootings rose to 50 on Sunday when police found another body at one of the mosques, as families waited for authorities to formally identify victims and release their bodies for burial.

Australian Brenton Tarrant, 28, a suspected white supremacist, was charged with murder on Saturday. Tarrant was remanded without a plea and is due back in court on April 5 where police said he was likely to face more charges.

Friday’s attack, which Prime Minister Jacinda Ardern labeled as terrorism, was the worst ever peacetime mass killing in New Zealand and the country had raised its security threat level to the highest.

Footage of the attack on one of the mosques was broadcast live on Facebook, and a “manifesto” denouncing immigrants as “invaders” was also posted online via links to related social media accounts.

The bodies of the victims had not been released to families because investigations were going on, Police Commissioner Mike Bush said at a media conference in Wellington.

It is customary in Islam to bury the dead within 24 hours.

“We have to be absolutely clear on cause of death and confirm their identity before that can happen. But we are so aware of the cultural and religious needs, so we are doing that as quickly and sensitively as possible,” Bush said.

Bush said the body of the 50th victim was found at the Al Noor mosque, where more than 40 people died after a gunman entered and shot at people with a semi-automatic rifle with high-capacity magazines, before traveling to a second mosque.

HERO HAILED
One man at the second mosque in the suburb of Linwood was being hailed for distracting and confronting the shooter, preventing further deaths.

Abdul Aziz, 48, told media he heard shooting and ran outside the mosque, shouting at the gunman and drawing him away from the building, the Newshub website reported.

Aziz, originally from Afghanistan, said he picked up one of the gunman’s discarded weapons and threatened the man, who drove off.

Police then rammed the gunman’s vehicle and arrested him.

“Those two police officers acted with absolute courage,” Bush said. “They have prevented further deaths and risked their own lives to do so.”

Church services for victims of the attack were held around the country, including at Christchurch’s “Cardboard Cathedral”, a temporary structure built after much of the central city was destroyed in a 2011 earthquake.

Thirty-four people were in Christchurch Hospital, with 12 in intensive care, and one child moved to dedicated children’s hospital in Auckland.

Greg Robertson, head of surgery at Christchurch Hospital said staff were used to seeing gunshot wounds and severe injuries, but the scale and nature of the attacks was different.

“The magnitude of this is the thing that is the most significant issue for people. It’s just comprehending what is the incomprehensible.”

At Hagley College, a school across the park from the Al Noor mosque, a support center was set up with a stream of victims’ friends and relatives arriving. One woman carried sandwiches and falafel.

A student, who asked not to be identified, said a friend had been killed.

“He was studying to be a pilot and we saw him for morning classes. Then he went to the mosque as usual. And we are not hearing from him,” he said. “I got a call last night from a friend, around midnight, to say he has passed away.”

The majority of victims were migrants or refugees from countries such as Pakistan, India, Malaysia, Indonesia, Turkey, Somalia and Afghanistan.

Pakistan’s high commissioner said six citizens had been killed and three were missing.

GUN REFORM
Bush said police did not believe that three other people arrested on Friday were involved in the attack. Two men faced charges unrelated or “tangential” to the attack, while a woman had been released, he said.

Tarrant did not have a criminal history and was not on any watchlists in New Zealand or Australia.

In a manifesto circulating online, Tarrant described himself as “Just a ordinary White man, 28 years old” who used the spoils of cryptocurrency trading to finance extensive travels through Europe from 2016-2018.

Ardern said Tarrant was a licensed gun owner who allegedly used five weapons, including two semi-automatic weapons and two shotguns, which had been modified.

“I can tell you one thing right now, our gun laws will change,” Ardern told reporters on Saturday, saying a ban on semi-automatic weapons would be considered.

New Zealand has in the past tried to tighten firearm laws, but a strong gun lobby and culture of hunting has stymied such efforts.

There are an estimated 1.5 million firearms in New Zealand, which has a population of only 5 million, but it has had low levels of gun violence.