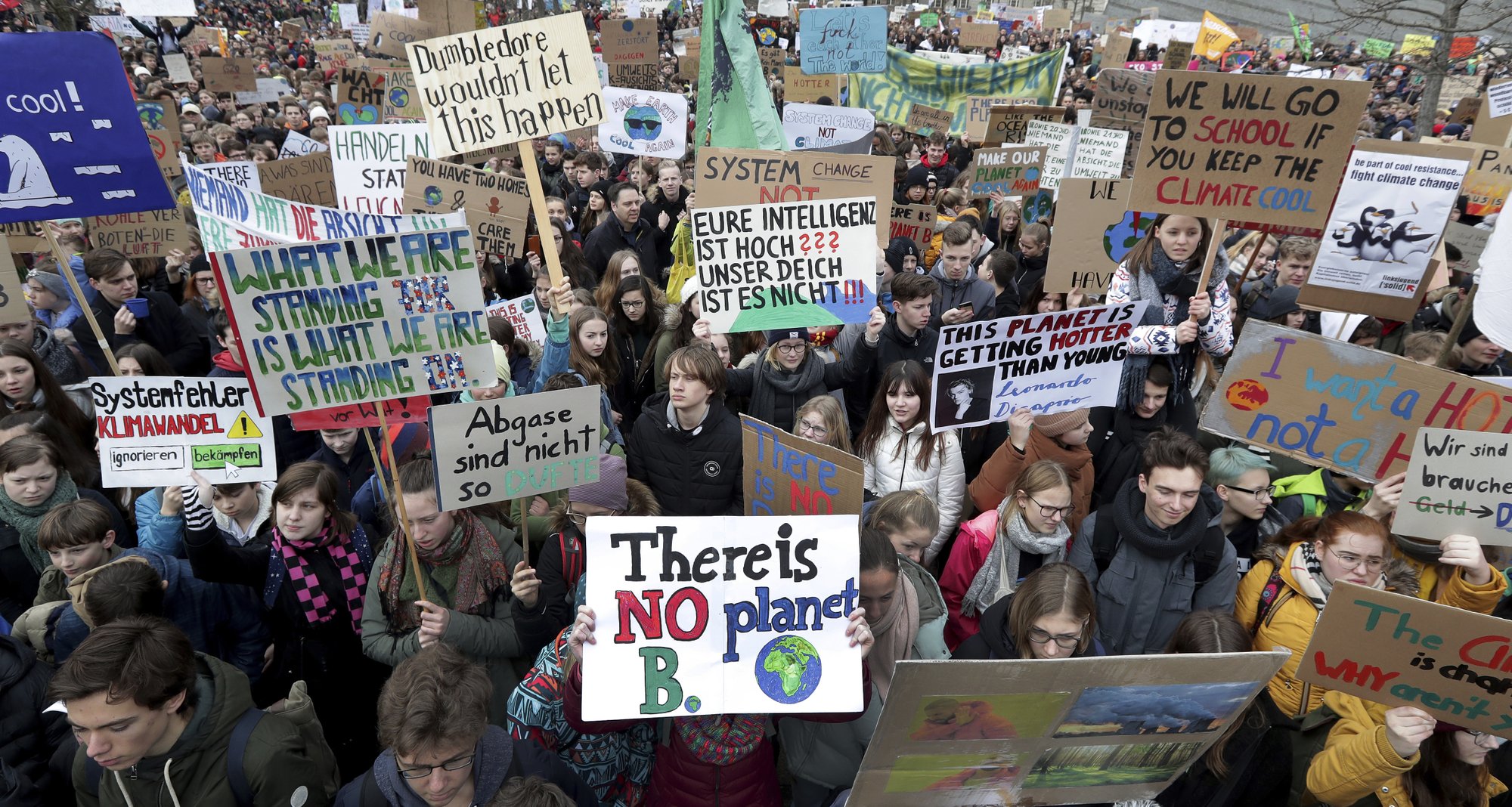 From the South Pacific to the edge of the Arctic Circle, angry students in more than 100 countries walked out of classes to protest what they see as the failures by their governments.

Well more than 150,000 students and adults who were mobilized by word of mouth and social media protested in Europe, according to police estimates. But the initial turnout in the United States did not look quite as high.

“Borders, languages and religions do not separate us,” eight-year-old Havana Chapman-Edwards, who calls herself the tiny diplomat, told hundreds of protesters at the U.S. Capitol. “Today we are telling the truth and we do not take no for an answer.”

Thousands of New York City students protested at locations including Columbus Circle, City Hall, the American Museum of Natural History and a football field at the Bronx High School of Science. Police said 16 protesters were arrested on disorderly conduct charges for blocking traffic at the museum.

Since then, the weekly protests have snowballed from a handful of cities to hundreds, fueled by dramatic headlines about the impact of climate change during the students’ lifetime. Unless emissions of heat-trapping gases start dropping dramatically, scientists estimate that the protesters will be in their 40s and 50s, maybe even 30s, when the world will reach dangerous levels of warming that international agreements are trying to prevent.

Thunberg, who has been nominated for the Nobel Peace Prize, said at a rally in Stockholm that the world faces an “existential crisis, the biggest crisis humanity ever has faced and still it has been ignored for decades.”

Alexandria Villasenor, a 13-year-old co-coordinator of the New York City protest that culminated in a die-in at the steps of the American Museum of Natural History, said while she was pleased with the number of demonstrators, a big turnout isn’t the point.

“It won’t be successful until the world leaders take some action,” Villasenor said.

Dana Fisher, a University of Maryland sociology professor who tracks protest movements and environmental activists, said action could possibly be triggered by “the fact that we’re seeing children, some of whom are quite small, talking about the Earth they’re going to inherit.”

Across the globe, protesters urged politicians to act against climate change while highlighting local environmental problems:

— In Paris, teenagers thronged streets around the domed Pantheon building. Some criticized French President Emmanuel Macron, who sees himself as the guarantor of the landmark 2015 Paris climate accord but is criticized by activists as too business-friendly and not doing enough to reduce emissions.

— In Washington, protesters spoke in front of a banner saying “We don’t want to die.”

— In St. Paul, Minnesota, about 1,000 students gathered before the state Capitol, chanting “Stop denying the earth is dying.”

— In South Africa’s capital, Pretoria, one protester held a sign reading “You’ll Miss The Rains Down in Africa.” Experts say Africa, with more than 1 billion people, is expected to be hardest hit by global warming even though it contributes least to greenhouse gas emissions.

— Hundreds of students took to the streets of downtown Los Angeles chanting “What do we want? Science! When do we want it? After peer review.”

— Thousands marched in rainy Warsaw and other Polish cities to demand a ban on burning coal, a major source of carbon dioxide. Some carried banners that read “Make Love, Not CO2.”

— Protests in Madrid and more than 50 other Spanish cities drew thousands. The country is vulnerable to rising sea levels and rapid desertification .

— In Berlin, police said as many as 20,000 protesters gathered in a downtown square before marching through the German capital to Chancellor Angela Merkel’s office.

Some politicians praised the students.

United Nations Secretary General Antonio Guterres said he was inspired by the student climate strikers to call a special summit in September to deal with what he called “the climate emergency.”

“My generation has failed to respond properly to the dramatic challenge of climate change,” Guterres wrote in an opinion piece in The Guardian. “This is deeply felt by young people. No wonder they are angry.”

In 2015, world leaders agreed in Paris to a goal of keeping the Earth’s global temperature rise by the end of the century well below 2 degrees Celsius (3.6 degrees Fahrenheit) compared with pre-industrial times.

Yet the world has already warmed by 1 degree Celsius (1.8 degrees) since then and is on track for an increase of 4 degrees Celsius, which experts say would have far-reaching consequences for life on the planet.

In Stockholm, Thunberg predicted that students won’t let up their climate protests.

“There are a crisis in front of us that we have to live with, that we will have to live with for all our lives, our children, our grandchildren and all future generations,” she said. “We are on strike because we do want a future.”

BRUSSELS, Jan 28: At least 70,000 people braved cold and rain in Brussels on Sunday to demand the Belgian government... Read More...