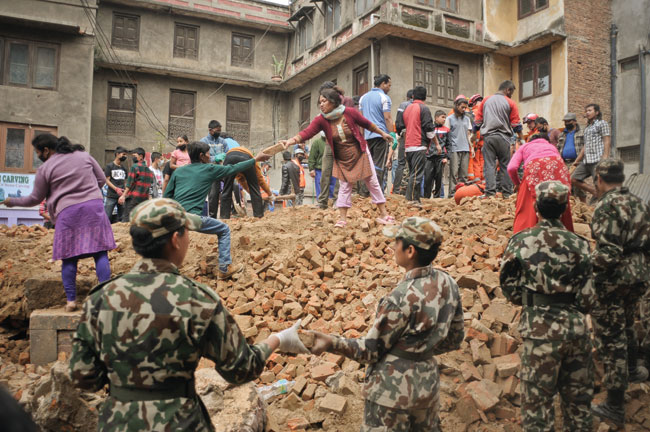 ‘Build back better’ is the slogan of National Reconstruction Authority (NRA) to implement the Post Disaster Recovery Framework (PDRF)—a five years strategic plan for bringing Nepal back to its feet. Rebuilding thousands of infrastructures and relocating hundreds of communities to safe locations is indeed a difficult task, but not unattainable, provided that we have strong political will, national solidarity and a credible force to deliver.

Unfortunately, there is little progress in post-disaster reconstruction. Newspapers have been flooded with reports of NRA’s ‘snail-paced’ work. This has added to the frustration of earthquake survivors. A security analyst recently told us that if their situation worsens, it could lead to another conflict in the country.

If Nepal doesn’t show credible progress in reconstruction, pledged funds might not come, donors have warned. A member of NRA explains that lack of funds is not a problem. The bigger problem is confusion over who will take charge of reconstruction.

Why Nepal Army? Because it is a credible institution that can properly utilize resources and it is committed to serving the people.  The national army has proven this time and again, not only in Nepal, but also in other countries.

On October 8, 2005 earthquakes destroyed around 611,000 houses and other infrastructure in Pakistan’s Kashmir. Under the supervision of Pakistan’s Prime Minister, an apex body of Earthquake Reconstruction and Rehabilitation Authority (ERRA) was established immediately. It was chaired by Lieutenant General Nadeem Ahmad, an active army officer. Pakistan Army was promptly mobilized. By the end of 2013, 96 percent destroyed infrastructures had been rebuilt in coordination with local communities, government agencies and I/NGOs.

In Nepal, NRA will have to mobilize, manage and coordinate with volunteers, diaspora communities and various stakeholders. It will have to establish hundreds of resource centers to assist communities demolish and reconstruct settlements. This is a daunting task because it calls for heavy engineering. Only Nepal Army can provide this at the moment.

Thus the government should not hesitate to entrust the Nepal Army with this responsibility in this time of need. After all, Article 267 (4) of the new constitution has a provision for mobilizing army for National Development and Disaster Management.

Besides, Nepal Army has impressive record in carrying out development works. It has proved its infrastructure development competence in opening the Kathmandu-Tarai fast-track. Twenty-two roads and tracks totaling 1,125 kilometers have already been constructed by the army and four more projects are under construction.

Nepal Army possesses ground and air transports capabilities and competent human resources. Besides, Nepal’s villages have no youths to carry out reconstruction works as most of them have left for foreign countries.

Apart from in-service soldiers, NA also has a huge number of retired soldiers and officers. They can also be mobilized for reconstruction, if necessary. These former servicemen are disciplined and have had vocational training on masonry, carpentry, plumbing and electric works. They can be immediately mobilized after giving them short, technical refresher training.

Thus NRA could create an hoc National Reconstruction Force (NRF) comprising 30 percent of active servicemen, 30 percent ex-servicemen and 40 percent civilians comprised of technical specialists, engineers and architects. Such a force will be five to ten thousand in strength at the start. It could be gradually expanded. Imagine what a difference Nepal Army could make if we had 14 battalions of such forces mobilized in 14 most affected districts!

We need to constitute this force through fast track process. It can be done by expanding and temporarily amending the existing mandate and composition of the already operational National Development and Security Directorate of Nepal Army, which is responsible for national development and disaster management.

NGOs, INGOs and private sector might feel uncomfortable working alongside the military. This had also happened in Pakistan. But this is not a business-as-usual situation in Nepal. History is a proof that military in Nepal have always helped people in need, respected their sentiments and safeguarded national interest.

Nepal Army, as an apolitical institution, can play an effective role in coordination, management and implementation of reconstruction works under NRA. We can build back better in the real sense only if we use all muscles and means within our reach. Nepal Army will prove its commitment to uphold civil-military relation by helping rebuild damaged houses and infrastructure. It is waiting for this opportunity.

Falling in love, relating the songs that we are listening to that one person, might sound cheesy, but when we... Read More...

If the Premier League contained only the current top six then Liverpool, not Chelsea, would be heading for the title. Read More...