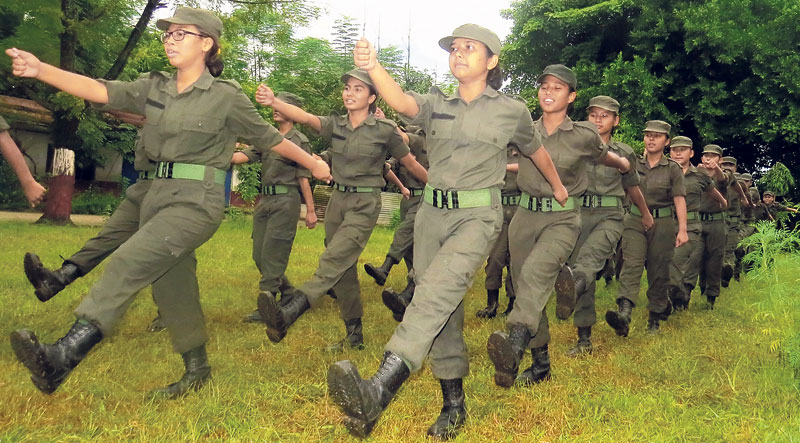 CHITWAN, Sept 21: Anusha Budhathoki of Mangalpur - 17 is extremely busy these days. She looks equally high spirited and active than usual times. “I love it very much. The exercise we do, and the host of things we are learning since few weeks is kind of transforming us,” said the ninth grader at a nearby school, Narayani Vidya Mandir.

Budathoki is one of the 36 students to be enrolled in National Cadet Corps (NCC) training being provided by Nepal Army (NA) since 18 July. She said that it is mandatory to reach school at 8.30 am and participate in two hours of training.

“We are learning lot of valuable things from the trainers. Sense of responsibility, patriotism, discipline, among others personality shaping attributes are being taught to us,” said Budathoki. “Reflecting back, I now feel that with these values missing, I was incomplete earlier,” she added.

Krishna Nepali, another student added that the things learnt in the training are going to guide their entire life. The values instilled in them are sure to make them more responsible and devoted citizens of the country.

According to Rabindra Chhetri, chief advisor of NCC and major general of Nepal Army, the training would be extended to all 75 districts of the country within a year or two. “The government has been making preparations for that. We have been enrolling more and more number of students each year. This year, 4000 students from 66 districts are receiving the training. Soon, students of all the districts would be included,” he said.

There training is guided by a specific theoretical and practical course prepared by the NCC. Chhetri said that trainers of Nepal Army reach out to the schools for 79 days out of 100 days. For the rest of 21 days, students have to come to the Army’s barrack and complete the training. “It has been so since the program’s inception. 21 days, the students come to barrack while for the rest 79 days our trainers train the students at their respective schools,” he said.

This year the 21-day training would be provided by Yangshila barrack in Morang district, Kohalpur barrack in Banke and Hattikhor barrack in Nawlparasi.

“Even though the training is provided by army and they are even taken to barracks, the training does not aim at making these students army in future,” said Chhetri. “The training focuses on transforming the participants into capable, physically robust, responsible, empathetic citizens that have leadership capabilities,” he added.

He further said that the students become more connected to their roots, their culture and feel more empowered after the training. Similarly, they are also given practical training on how to rescue people during natural disasters. “Another very important part of training is preparing them for taking active role in rescue operations during natural calamities,” he said.

No money is charged from school or students for the training. Besides, the participants are provided with nutritious food and drinks. Remarkably, those who excel in it also get an opportunity to travel to India, Sri Lanka and Bangladesh. NCC trainings are conducted in those countries as well. In India, it is common practice that those who receive NCC training often join the Army later.

“Even in our context, some students do that, though it is not as common as in India,” Chhetri said. “But the real goal of the training is to help them to become successful person, and not to attract them in joining army in the future,” he added.

The details of the students who receive NCC training are circulated to local bodies - concerned army barrack in the district, District Administration Office and District Education Office.

“At the time of the need, they could be contacted for help, like in the case of natural disasters. That is also the reason why we must be able to extend the training to more and more schools, and more and more villages. The trained students can act as rescuers during emergencies,” Chhetri explained.

Amar Parajuli, proprietor of Narayani Vidya Mandir stated that the students who have been receiving the training have already started to show remarkable changes. “They have really changed. Earlier we need to insist for having them to do this or that. But they would often not heed to it. Now, they take the lead,” he said. “It is amazing to see them transformed in such a short time,” informing that the training had started on July 18.

The urgent need of the hour is to transform the current culture of Nepali society from an unstable “lahure” to something... Read More...

NA plane returns from China with medical equipment
15 hours ago

32 tourists rescued from Manaslu
12 hours ago

14 days' isolation required even after discharge from hospital: Chinese doctors
10 hours ago

Amid rising coronavirus cases, govt extends nationwide lockdown by a week
39 minutes ago

14 days' isolation required even after discharge from hospital: Chinese doctors
10 hours ago