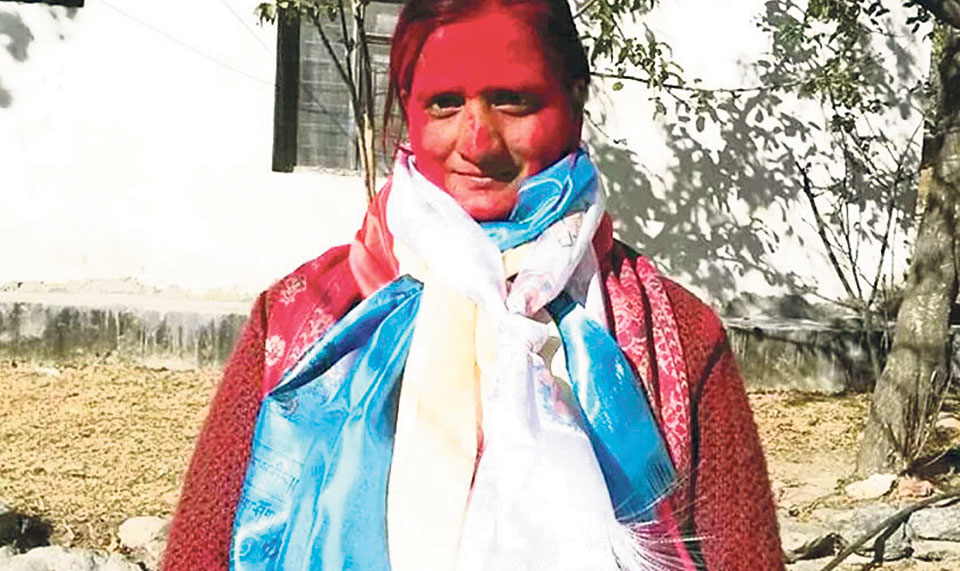 BAJHANG, March 9: Devaki Malla (Thapa), a member of the Sudurpaschim province assembly who was  briefly held by the cadres of the Netra Bikram Chand-led CPN-Maoist on Friday was released the same day after an “interrogation by the party.”

Malla was “taken under control” from Kedarsyu Rural Municipality-5, when she was on her way to a function organized on the occasion of the International Women’s Day. She was held at around 9 am and was released after 4 pm the same day.

Malla  who was elected a lawmaker from constituency (B) of Bajhang is a local of Durgathali-1, Thapagaun. After inaugurating a health camp   in Bithdachir Rural Municipality, she was headed for another program when she was taken under control by the cadres of the party.

She complained that she received several threats from the party members. According to her, she was not ill-treated but was threatened to resign from her position.

Meanwhile, some cadres of the party have stated that the purpose for detaining Malla was to exert pressure on her to take some initiatives to find out the perpetrators of the rape and murder victim  Nirmala Panta. Besides that, they also demanded for the release of Bandu Chand, Chairperson of Nepal Mahila Sangh Krantikari (a sister organization affiliated to Chand’s party) who was arrested from a program a few days ago.

Interestingly, a group of cadres commanded by her own brother Bharat Malla, who is the District Secretary of Chand’s party apparently held Malla. Deputy Superintendent of Police (DSP) Prabin Dhital informed Republica that police have expedited investigation into the case. He assured that lawmaker Malla has been provided security after the incident.

In the meantime, Chand’s party has issued a press release stating that the party  has no involvement in Malla’s abduction. After being released seven hours later, lawmaker Malla still managed to attend the women’s day program, according to Janaki Bohora, Vice-Chairperson of Bithdachir Rural Municipality. Reportedly, she expressed her bitterness and ire against Chand’s party while addressing the crowd present at the program.

Our government was overthrown with the help of reactionaries: Oli
12 hours ago
Finance Minister Sharma looks to announce new budget for FY 2021/22
11 hours ago