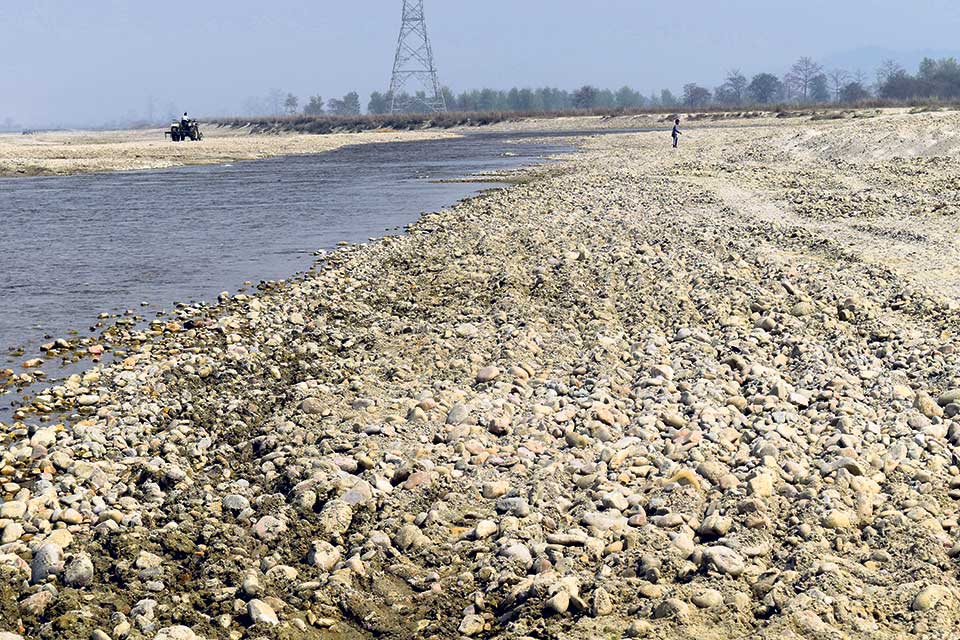 Stones collected from Kamala River in Siraha in kept on the river bank before being transported elsewhere in thie recent photo. Photo: Mithilesh Yadav/Republica

SIRAHA, March 6: The banks of Kamala River attract locals of Dhanusha and Siraha districts for picnics and outings. During holidays, such crowds are seen on the banks of the river in summer as well as winter. They, however, express concern that the landscape they are enjoying won’t be the same in the near future unless rampant excavation of Chure comes to an end.

“I have come here for picnic even before. Every time, I see people collecting stones and aggregate from the river bank at an alarming rate. If this continues unabated, no stones will be left in the days to come,” said Prakash Koirala, a local of Karjanha Municipality. “Nobody checks it, they are destroying Chure,” he added.

“Earlier, there was a ban on mining in Chure. But after the local government came into existence, they started using the resources at their whim. When the government acts responsibly, wrong things get controlled, and vice versa,” he added.

Environmentalists have long warned of irreparable loss if unabated excavation of Chure continues. Impacts have already been visible in the plains. Water sources have been disappearing and floods have become frequent.

“The municipality and its wards give contract for the collection of aggregate and sand haphazardly. The contractors do not follow any rule and the crusher industries operate round the clock,” said Koirala.

Ram Babu Yadav, mayor of Ganeshman Charnath Municipality, said that the contract for the extraction of the materials in Kamala River in his municipality has been given for Rs six million in the current fiscal year. “They got the contract following bidding process,” he said.

Mohan KC, chairperson of Karjanha Municipality – 1, admitted that there has been massive destruction of Chure.

“Yes, the extraction is going on in a massive scale due to the lack of monitoring,” he said. “Even if I want to, I cannot control all this alone. All the stakeholders have to be serious about the issue and work together for conservation of Chure,” he added.

According to the mayor, it is not wrong to extract aggregate from rivers. Such materials are necessary for development projects, he argued.

“We have been consulting with the chief district officer (CDO) over the issue. After we give contract to someone, we cannot create hurdle on their way,” he said.

Yadav stated that CDO Rudra Pandit is not against extraction of materials.

“If such materials are not extracted from rivers, what is the use of giving them contract? How can contractors pay us?” he questioned. He added that the extractions have not been affecting the environment and refuted the charges that there has been negligence in monitoring.

“Everything that people say is not true. Yes, contractors have been collecting aggregate and sand from rivers because we gave them the rights,” Yadav defended. “We, as the representatives of the local bodies, have the rights over our rivers, our mountains, our herbs, and other natural resources. It is legal to use those resources,” he added.

Meanwhile, Koirala stated that it is not just the rivers which are being misused by the local bodies. Forests are under threat too. Even though the local government has vowed to protect trees, deforestation is going on unabated, he said.

“Things are getting worse right under our noses. It is not just the rivers which are being emptied. Mafia have been reigning over our forests, there is no monitoring,” Koirala said.

In the last few decades, many forest lands have turned into human settlements across the country. In the Tarai, landless people and squatters have occupied huge acres of land. Though such lands are given to the needy people including those hit by natural disasters, land mafia actually capture the plots, according to Koirala.

“What happens is that the real victims are left out and some others occupy the land forever. There are many such forest lands which have been taken away that way, but we don’t have the exact data on how much of such land have gone in the hands of land mafia,” Koirala said. He alleged that the local bodies, instead of freeing such lands, protect the mafia.

Environmentalists suggest that rivers, lands and forests in the Chure range be strictly protected. Continuing to treat Chure with negligence will cost dearly to the entire country, they warn.

“We have been hearing such warnings since a long time. But the government is turning a deaf ear to the issue,” Koirala stated.

Worldwide screening of '14 Peaks, Nothing Is Impossible' based on Nirmal Purja's biography
17 hours ago

Worldwide screening of '14 Peaks, Nothing Is Impossible' based on Nirmal Purja's biography
17 hours ago

UML General Convention: Voting begins at 4 AM
19 hours ago