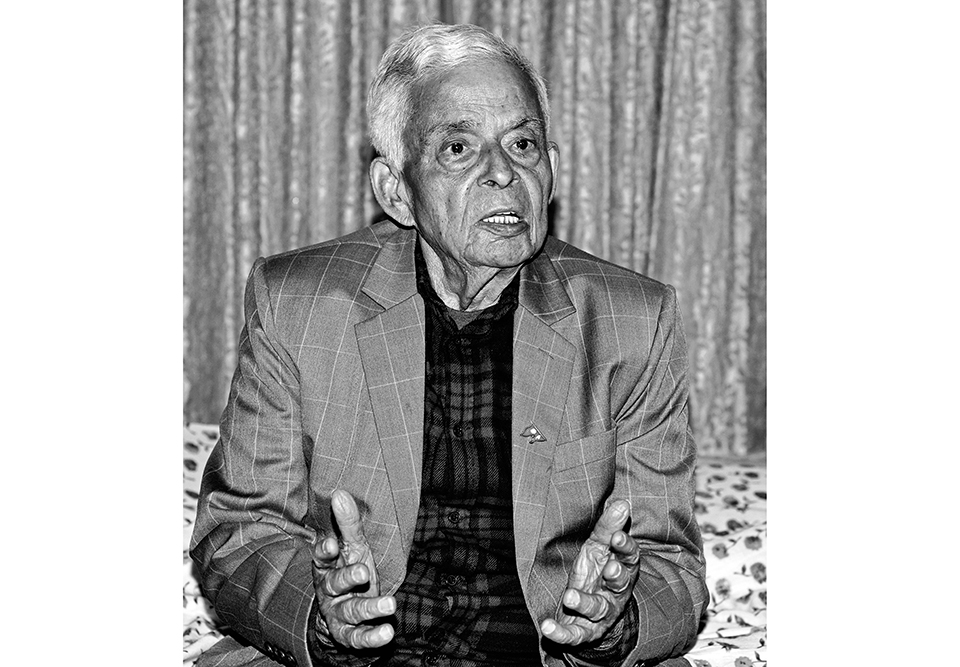 KATHMANDU, March 3: Bharat Mohan Adhikari, a four-time finance minister who first introduced the Aafno Gaun Aafai Banau program to develop villages across the country, giving them authority to select their development projects on their own, died on Saturday night. He was 82.

“We are very sad to announce that Shree Bharat Mohan Adhikari, who was undergoing treatment at this hospital for the last 23 days, has passed away at 9:35 pm on Monday,” said HAMS Hospital in a press statement.

Senior NCP leader Adhikari, who also served as deputy prime minister twice, breathed his last at Dhumbarahi-based HAMS Hospital. He was admitted to the Intensive Care Unit for the past few days following lung and heart-related complications.

Born in Bhramarpur of Mahottari on May 4, 1936, Adhikari was a four-time member of parliament from Morang district. During his political career, Adhikari also worked as the then CPN-UML’s deputy parliamentary party leader and transportation minister.

Adhikari was popular among the general public for introducing the Aafno Gaun Aafai Banau, a development program aimed at developing villages across the country, giving them the authority to select local projects on their own. The program was introduced when he was finance minister in the government led by Manmohan Adhikari in 1994. Though the first elected communist government lasted only nine months, the popular programs introduced by Adhikari in the annual budget helped the party win popularity among the general public as well.

Adhikari played an important role as a member of the constitution drafting committee in 1990 and was actively involved in drafting the Interim Constitution of 2007. But he is best known for Aafno Gaun Aaafai Banau and elderly allowances schemes.

Under the program, Adhikari allocated Rs 500,000 to each Village Development Committee (VDC). Before, the local bodies used to get money only through the district bodies. Adhikari had also decided to provide Rs 100 as a monthly allowance to each citizen aged above 75. This also made him popular, among elderly people in need of support.

Then opposition Nepali Congress initially opposed Adhikari’s policy, saying that a distributive budget policy won’t help the country’s development in the long run and would only be a huge burden on state coffers. But all successive governments including the ones led by Nepali Congress couldn’t stop the program. The successive governments have significantly widened the areas of the social security schemes introduced by Adhikari.

Pro-development programs introduced by the first elected communist government helped raise the then UML’s image among the general public.

A liberal and moderate leader, Adhikari was always preferred by the party chiefs for cross-party negotiations and for settling intra-party feuds.

Party leader Krishna Gopal Shrestha said Adhikari’s body will be placed at the party head office Sunday morning for final tributes by party members and other members of the public.
Adhikari is survived by his wife and three daughters.

Adhikari to be cremated today