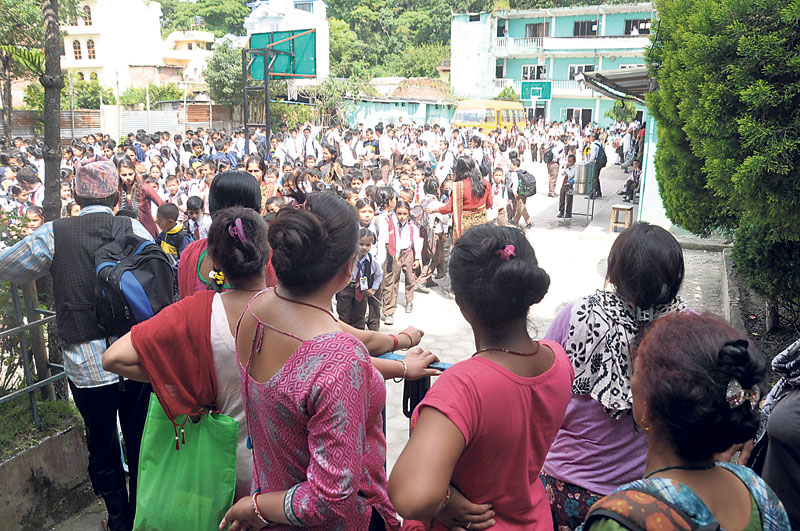 Parents wait to pick up their wards at the gate of Jorpati based Aakashdeep School, Jorpati, Kathmandu on Tuesday.(Upendra Lamichhane/Republica)

KATHMANDU, Sept 21: Innocent smiles on the cute faces of a school's children disappeared completely on Tuesday morning when they reached school. What had overpowered them was deep sense of fear and insecurity. They were struggling to understand what actually happened around them and were curiously watching the chaos following a bomb explosion at their school.

The bomb that blasted in the wee hours did not claim any human lives, but it indeed left ugly signals around that disturbed innocent hearts after they came to know about the cruel attack on their school hours later. Usually these kindergarten students would start their day reciting 'B for butterfly' after their teacher, but on Tuesday the schedule was disturbed and instead replaced with terror. The B for Butterfly was replaced by B for Bomb. The word shook them and their parents equally and will remain a hard alphabet and word to forget.

“Their faces would speak volumes. Especially, the small children were unable to comprehend things, terror surfaced on their faces, which would otherwise always gleam in smile,” said a teacher of Aakashdeep English School of Jorpati, one of the two schools in the capital where bomb exploded. “We have told our students that we had done nothing wrong. We have never troubled others. We should not worry, those who dare to wrong are the ones who should worry,” he added while still attending the morning assembly at the school.

Explosives were placed in over half  a dozen schools in the capital. In other places, they were disposed or detonated by security forces, but they blasted at Aakashdeep and Manokamana schools. With these bombs going off, the news and consequent terror spread like wildfire across Kathmandu valley. Children and parents were terrified. On social media the news was condemned from every quarter of the society terming the action as a 'cowardly attack on the space of innocent children'. Though there were no human causalities in the incidents, the bombs nonetheless instilled fears in people.

“As soon as I heard of bomb at the school, my feet began to tremble and my heart began to beat faster,” Ambika Thapa parent of a tenth grader who is a residential student at the Manokamana School said. “I was out of my wits. So many thoughts and fears crisscrossed my mind. I heaved a sigh of relief only when I reached the school and was informed that he was safe and was studying. That moment has passed but the thought and realization is still burning my heart,” she said adding that “A feeling, like, our children are not safe is continuously hitting me. It's very hard to overcome it,” she added.

There was crowd of parents in all the schools where bombs were placed or went off. While some were desperate to have a glimpse of their children at the school, some others were just dumbfounded on realizing what had been going on.

“My daughter used to come to school alone. But today she insisted that I should accompany her to school and I also felt the same,” said Sunita Maharjan, a Makkalbari, Jorpati resident and parent said. “I am still trembling deep inside reflecting on the insecurities amid which I have been sending my daughter to school on her own. Even schools are not safe in the country's capital.”

Maharjan was restless and was waiting outside the school for her daughter to finish classes. “I cannot leave her alone. It's very unsafe. I won't leave the school unless she completes her studies and goes home with me,” she said.

Sudee Shrestha, a tenth grade residential student at the Manokamana school, said that his bed rocked when the bomb blasted and that he and his peers were very terrified. “The bomb blasted with such a force that it shook my bed terribly. I was shocked and was not able to comprehend anything around me. My mind had gone blank. I was happy to have my parents come to pick me up. I went home and came back to school after I was feeling a little calm,” he added.

When children reached at the school, the school was in disorder and smell of gun power was all around. This made them nervous in seconds and despite teachers' and guardians' effort to calm them down, most children remained disturbed. Seeing children getting into their school with their noses covered to avoid the gunpowder smell and the usual charm completely replaced by terror was a very heart touching moment for the onlookers.

The bomb blasted with such force that it shook my bed terribly. I was shocked and was not able to comprehend anything around me. My mind had gone blank. I was happy to have my parents come to pick me up. I went home and came back to school after I was feeling a little calm.

After three hours walk to school, children have no classes