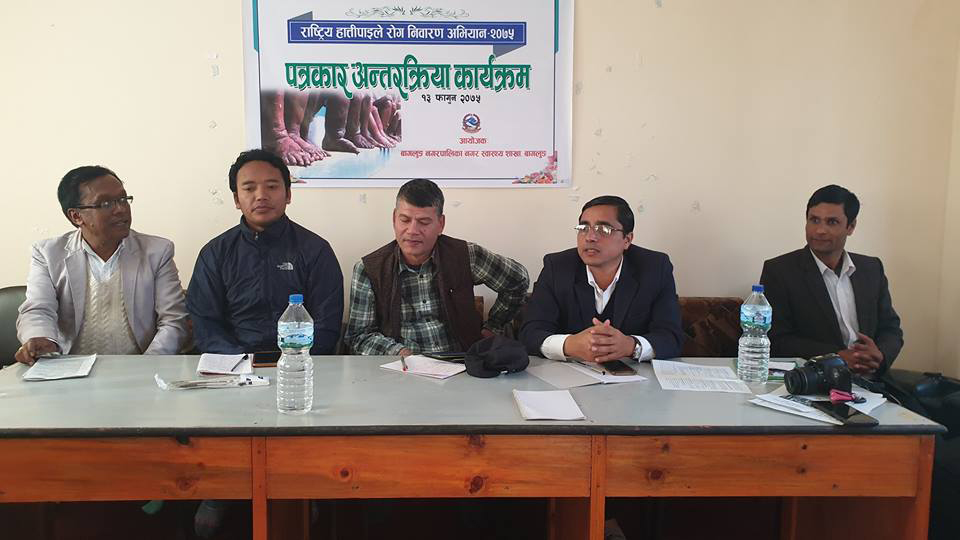 A press conference organized for the awareness of elephantiasis

BAGLUNG, Feb 27: In order to eradicate the devastating elephantiasis disease, District Public Health Office (DPHO), Baglung is going to launch yet another campaign from Wednesday against elephantiasis. The DPHO will be providing medication against the disease to 252,000 people of the district.

As the district has been running elephantiasis campaign since 2013, this is the third such campaign being organized here. The objective of the program is to protect the people from the dangerous disease by providing timely medicine and precaution. At a press conference organized by Municipal Health Department, Baglung, it was announced that the people would receive the medication in the presence of health workers from all 85 wards of the district.

Deepak Tiwari, Senior Public Health Administrative Officer of Baglung informed Republica that preparations are underway to provide medication to around 252,000 people. "As the two previous campaigns were ineffective in eliminating elephantiasis completely, we are determined to abolish it this time," said Tiwari.

Altogether 450 health workers will be deployed for the campaign this time. On February 27, the DPHO will be providing medication to people under the supervision of senior health workers. According to DPHO, this campaign will be completed within a week.

In the past, people were distributed such medications in camps but now health workers have started reaching their doorsteps. "In our previous campaigns we just recorded the number of people who consumed the medicine. But this year we will also mention the details of the family members who take the medication," said Tiwari, adding," We are hopeful that it will help to make our campaign effective."

Earlier, during a blood test conducted among 620 people, 15 people of Narayansthan had the elephantiasis-causing parasite in their blood. So, this campaign was extended for two more years.

Meanwhile, Surendra Khadka, deputy mayor of Baglung informed that even the local representatives would be deployed during the campaign. "Representatives will be making people aware about the disease and the importance of medication," said Khadka.

KHOTANG, Aug 13: Halesi-Khotang Drinking Water Project in Halesi Tuwachung Municipality is not gaining pace due to dilly-dallying by the contractor. Read More...

JANAKPUR, April 29: Janakpur, which is a popular destination for pilgrims, has recently earned the recognition of the capital of Province... Read More...