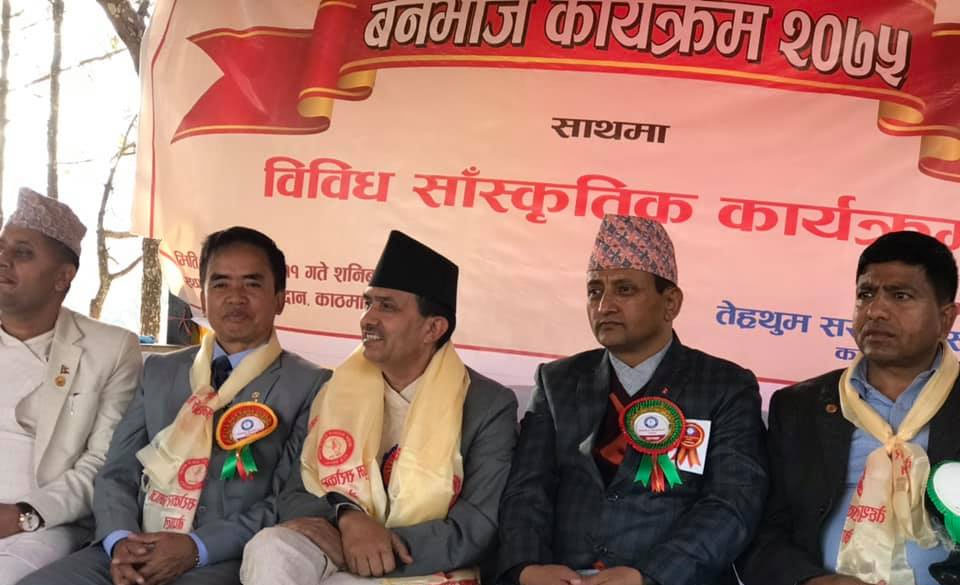 KATHMANDU, Feb 24: Minister for Law, Justice and Parliamentary Affairs Bhanu Bhakta Dhakal has said that he would never let the people feel void and suffer from injustices in the absence of law.

Speaking at a picnic program organized by Tehrathum Sarokar Samaj Nepal in Tokha Municipality in the capital, Law Minister Dhakal said he would not let the people feel void and suffer from injustices to be resulted in by the lawlessness situation.

“Born in Tehrathum, I have become a law minister now. I will never let Tehrathum people down rather always make you feel proud by doing exemplary works during my tenure,” said Dhakal, adding, “This will, of course, make the country feel that people from Tehrathum district can accomplish every kind of responsibility they are assigned to."

Meanwhile, Dhakal urged the picnic organizing committee to keep holding such events to maintain unity and brotherhood among the Tehrathum people residing across the globe regardless of geographical distance.

Similarly, concluding the program, Mohan Dangi, chairman of the Sarokar Samaj, vowed to keep the organization as a non-political social organization so as to make all the people feel at home with the organization, regardless of their political belief.

“Various programs including Chyabrung dance, palam, (typical song of Limbu community), folk songs were performed to make the participants feel as if they were in their own home district," Dipesh Limbu, a participant of the program, told Republica Online.

As the organization is dedicated to the service of the people from Tehrathum, the participants also raised a fund worth over Rs 100,000 for a cancer patient, fire victim, and cardiac patient during the program.

Designed by Haripati Lal Shrestha, vice chairman and coordinator of the Tehrathum Sarokar Samaj Picnic Organizing Sub Committee, the program was conducted by Keshab Bhattarai, General Secretary of the Samaj.

BHAKTAPUR, Dec 13: Twenty-two college students have sustained injuries when a bus met with an accident at Ghyampedanda of Bhaktapur... Read More...

We are all accustomed to lunching and dining at restaurants that we have almost forgotten the good old picnic. But,... Read More...

KATHMANDU, May 1: The Circulation Department of Nepal Republic Media has organized a picnic program at Godawari, Lalitpur on the... Read More...