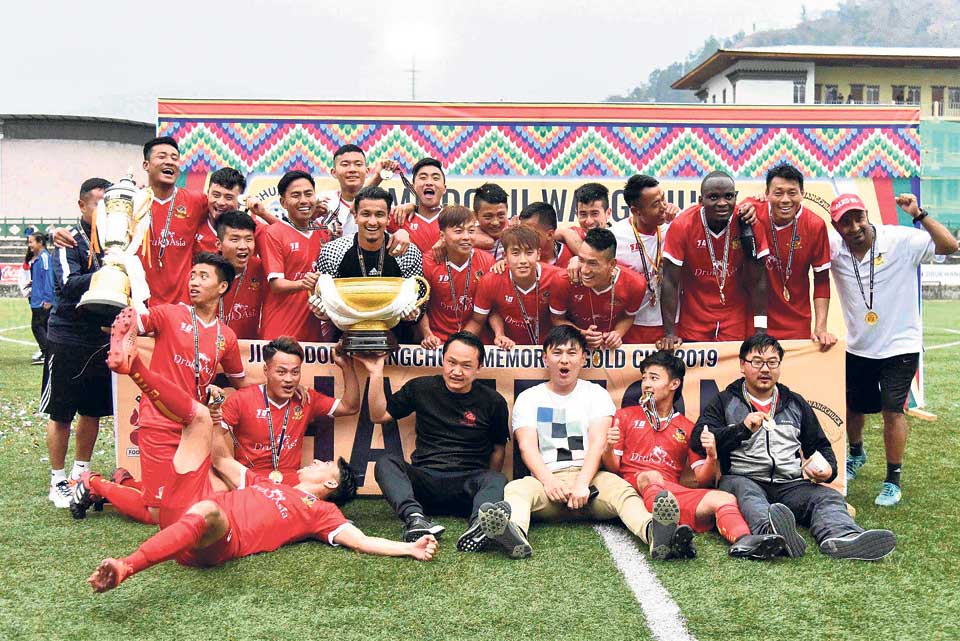 Three Star, with an aim to win the first international title of the season, lost to Paro who had already defeated the departmental team Tribhuvan Army Club in the semifinals.

The team, comprising Nepal U-19 team captain Arpan Karki, scored the winning goal in the 73rd minute to win the tournament. Chencho scored a thumping header from the far post getting out of his marking man.

Paro that had defeated Army 1-0 in the semifinals kept Three Star under immense pressure throughout the summit clash.

Paro created one chance after another with attacking football in the first half. Three Star presented an improved performance in the second half creating chances with attacking style of play, but could not capitalize those chances.

Three Star’s Ajayi Martins got a one-vs-one chance inside the danger box in the 58th minute, but he could not convert it. Then, the home team played brilliant attacking football and scored a goal presenting a continuous set piece threat.

Three Star then tried to score a goal, but the time was not sufficient and it could not create clear chances to equalize in the game.

Three Star head coach Megh Raj KC said that the team had to lose the game as it failed to convert the chances it got in front of the goal.

“The team played very well in the game, but we were poor mainly in finishing,’’ KC said. “Even though the midfield created chances combining well with passing football, but the forwards missed those chances and we lost the game.” He was of the view that they had to submit the game as they could not score even in clear chances.

Nepal U-19 team’s captain Karki, who had been playing for the Bhutanese club, has been successful to give his side the first title of the season.

He played a pivotal part of Nepal’s U-19 team winning the SAFF U-18 Championship playing wonderful.

A total of 12 teams from the host Bhutan, Nepal and India took part in the tournament where Three Star and Army got direct entry to the quarterfinals.

This is one of the oldest football tournaments of Bhutan and was organized for the first time since 2006.