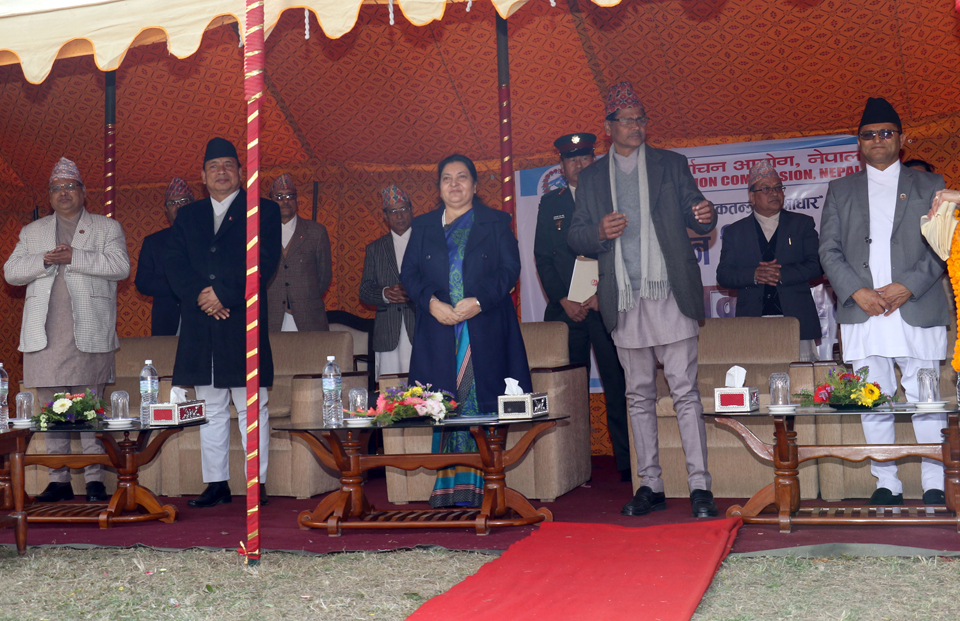 KATHMANDU, Feb 19: President Bidya Devi Bhandari has said the government has paved the way for the socio-economic transformation of the country. She underscored the cooperation, collaboration and unity among all sides including political parties, intellectual circle and public to fully utilize the present opportunity created by the stable government.

Addressing a program organized on the occasion of the third Election Day in the capital city on Tuesday, President Bhandari reminded that political parties, civil society and entire Nepali populace made the elections successful to usher the country into federal set up, thereby ending political transition.

The country, which is now a federal republic, has been oriented towards socialism-oriented economy, so all sides' unity was imperative to country's campaign of prosperous Nepal-happy Nepali, according to her.

She hailed the role of Election Commission in strengthening of democracy. The enthusiasm and tolerance exhibited by the Nepalis during elections leads the country towards prosperity, the President underscored. However, the election could be made more convenient and voter's friendly with the use of innovation.

On the occasion, Chief Election Commissioner Ayodhee Prasad Yadav said the Election Day being marked in memory of day of the first election held for people's representatives after the downfall of Rana regime- Falgun 7, 2015 BS. He further said efforts were on to study the feasibility of ensuring voting rights to Nepalis living abroad.

Who is behind the poor economic performance?

KATHMANDU, March 7: ‘Economic revolution’ and ‘economic transformation’ were buzzwords when a rare two-third majority was achieved in the parliament... Read More...

CHITWAN: President Bidya Devi Bhandari has highlighted the significance of education for the prosperity of human life. ... Read More...

One killed, seven injured in car accident in Biratnagar
16 hours ago