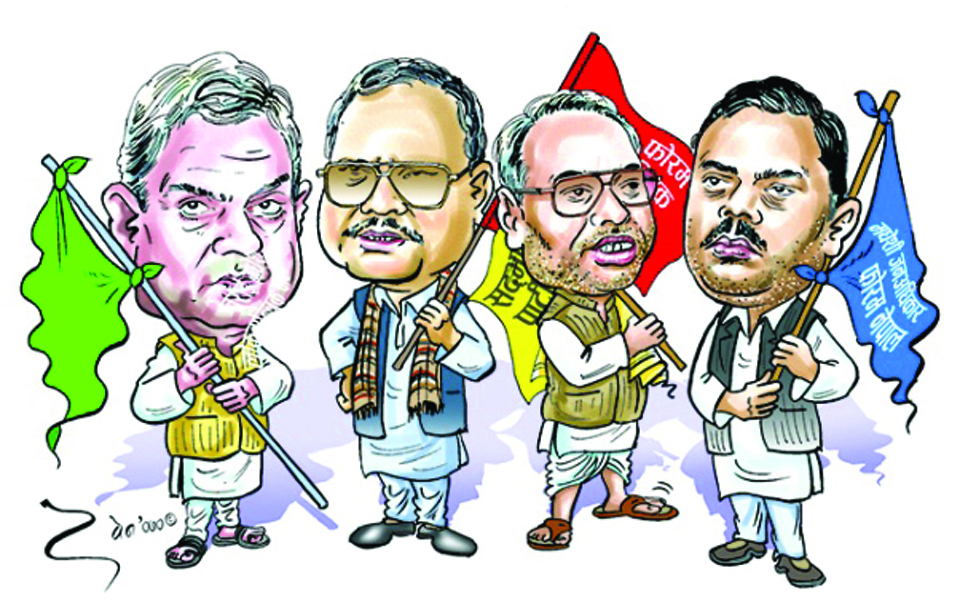 Madhesi leaders don’t care about real needs of Madhesi people. They don’t serve people and they have no compunction that they are not serving

After multiple splits, Madhes-based parties are talking about uniting in Province 2. But this is not going to serve cause of Madhes, for Madhesi leaders have proven track record of betraying Madhesi people, several times. And they have used every movement as a ladder to power, nothing else.

When in 2007, Madhes movement broke out after promulgation of Interim Constitution. The movement spearheaded by Upendra Yadav-led Madheshi People’s Right Forum, Nepal (MPRF-N), then an NGO, accidently gave astonishing popularity to Upendra Yadav and others.

The second movement of 2008 jointly launched by MPRF-N, Mahanth Thakur-led Tarai Madhesh Democratic Party (TMDP) and Rajendra Mahato-led Sadbhawana Party (SP) had the agenda of federalism, proportional representation and constituency delineation on the basis of population.  The third movement took place in 2015 against the constitution. Like in 2007, they burnt the copies of the constitution. It ended without any agreement with the government.  Yes, first and second movements resulted in 22-point and eight-point agreements but none of them have been implemented. Not because of the government as Madhesi leaders would have us believe. It’s because of Madhesi parties and their leaders. Here is how.

All the agreements have become the means to rise to power.  Consider this. Upendra Yadav-led Federal Socialist Forum (FSP) joined the incumbent government after two-point agreement. The agreement was meant to address issues related to Madhes protest and constitution amendment. Yadav is in power since June but he has done nothing.

Madheshi parties signed an agreement on March 23, 2011 to join Jhalanath Khanal-led government. Main agenda was to implement 22-point and eight-point agreements of 2007 and 2008 respectively, which included bulk entry of Madhesi youths in Nepal Army in line with the principle of proportional inclusion. This was never done. Instead, Madhesi leaders bagged lucrative ministerial portfolios on the pretext of this agreement.

In 2011, another agreement was signed between Pushpa Kamal Dahal-led UCPN-Maoist   and Madhesi parties led by Bijay Kumar Gachchhadar, Jay Prakash Gupta and Mahendra Ray Yadav.  One of the points of agreement was related with forming a separate regiment for Madhesis in Nepal Army. This did not happen.

These regional parties raise agendas of rights and reforms exclusively when they are in opposition, not when in power. One and only thing they want is ministerial position.

It bears recalling what these parties had promised.  Madheshi parties protested the 2015 Constitution by imposing a 135-day long trade embargo (together with India). The unrest claimed more than 40 innocent lives. Today, they are holding vital government offices and taking oaths of offices and secrecy under the current constitutional framework. Why did they instigate people against the constitution, if they were to ultimately accept it?  Why do the concerns of Madhesis (jobs, equal opportunities, development etc) not become their concern?  Come to think of it. Some Madhesi leaders have become ministers several times. Bijay Kumar Gachchhadar, for example, has become the minister more than a dozen times. He may be the only leader with such distinction in the world. He was physical planning minister for as many as six times and minister for water resources for two times.

The so-called Madhesi intellectuals and analysts are no different. Most of them are NGO workers and toe NGOs’ agenda. Recently, a government secretary Bidyanath Jha was beaten on duty by Bijay Yadav, a sitting minister in Province 2. Jha had refused to approve an NGO that the province minister wanted him to select in the preliminary round of Micro-enterprise Development Program. This act of hooliganism has defamed Madhes.

During the first Constituent Assembly election in 2008, there were only four Madhesi parties. In the second CA election, their number increased to 34, because of split within split. They split when they have to join the government, they unite when they are in opposition or when they are weak.

Constitution is a living document and it can be amended as required by people and the country. This is none of their issues now. They are fooling the people in the name of amendment. Why don’t they raise the concerns of Madhesh when they are in power? Why do they raise contentious issues exclusively when they are out of Singha Durbar?

There are some provisions in the constitution which need to be amended, for brevity, clarity and wider ownership. Why don’t they talk about it when in power?

Jha, co-author of “Nepali Constitution Vs The Constitution of India: A Comparative Approach,” is LLM graduate in Constitutional Law from Uttaranchal University, Dehradun