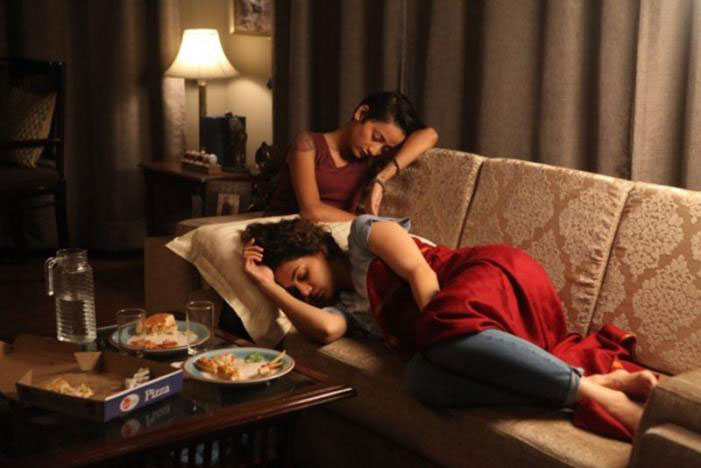 There's a sense of foreboding in the opening titles of Aniruddha Roy Chowdhury's "Pink", as the camera follows two sets of people in their cars late at night. In one, a young man lies in the backseat, moaning in pain as blood runs down the side of his face, while his friends drive him to the hospital. In another, three young women travel in a cab, biting their fingers and looking at each other nervously.

Those three are Meenal (Taapsee Pannu), Falak (Kirti Kulhari) and Andrea (Andrea Tariang), working women who rent a flat in New Delhi and are subjected to constant threats, intimidation and harassment from Rajvir and his friends. Meenal hits Rajvir (Angad Bedi) on the head with a glass bottle, injuring his eye. Rajvir, the nephew of an influential politician, cannot believe he nearly lost an eye because a woman hit him. "Un ladkiyon ko nahi chhodenge" ("We won't spare those girls"), one of his friends vows.

That is what makes the first half of "Pink" taut - the cat-and-mouse game. But after the intermission, the scene shifts to a courtroom where Meenal is accused of attempting to murder Rajvir and all sense of foreboding is replaced by a sense of inevitability about how this film is going to pan out - with the women triumphing over the odds.

Retired lawyer Deepak Sehgal, played by a grizzled Amitabh Bachchan, takes their case. In a twist redolent of dark irony, he stands up for their right to live the way they want to live as women, and applies his sophistry and legal expertise to getting them off. This is ironic because he is their neighbour, and one who stares at them rather creepily from his balcony. It's this very male gaze that is the hallmark of so much harassment that women suffer.

And does Bachchan ever deliver the moral goods in the second half of the film, whose purpose clearly is to talk about sexual assault, women's rights and the crucial issue of consent - a concept lost on many Indian men. The courtroom scenes serve as a plot contrivance to allow Bachchan to pontificate, often with a deadpan expression on his face. This is not a bad thing, even if the delivery is a trifle saintly.

Some of the scenes are wonderfully handled and the acting, especially by the three lead actresses, is top-notch. But the lack of attention to detail makes you wish the makers had paid some attention to how basic court procedures are handled. Sehgal calls and dismisses witnesses at will, the trial proceeds at a lightning pace and the judge decides to convict someone of a crime they haven't even been charged with.
And yet, there is something to be said for Amitabh Bachchan, an irrefutable icon of Indian cinema, talking about the importance of listening and understanding a "no" from a woman. "Pink" isn't squeamish about morality either. The women in the film are in relationships, sexually active and are not ashamed to admit it. There are no attempts to "redeem" them by Bollywood standards. The men, on the other hand, exemplified by Rajvir, are one-dimensional and forgettable.

"Pink" is largely a triumph - a Bollywood film that talks about a burning topic and finds an entertaining way to do it. If only they had known where to stop the gimmickry and take it down a notch, it would have been a landmark film.

Three middle-aged men sit at a typical Japanese restaurant sipping hot sake. One of them has taken a young wife... Read More...

Fire breaks out in Fusre of Dharan
10 hours ago