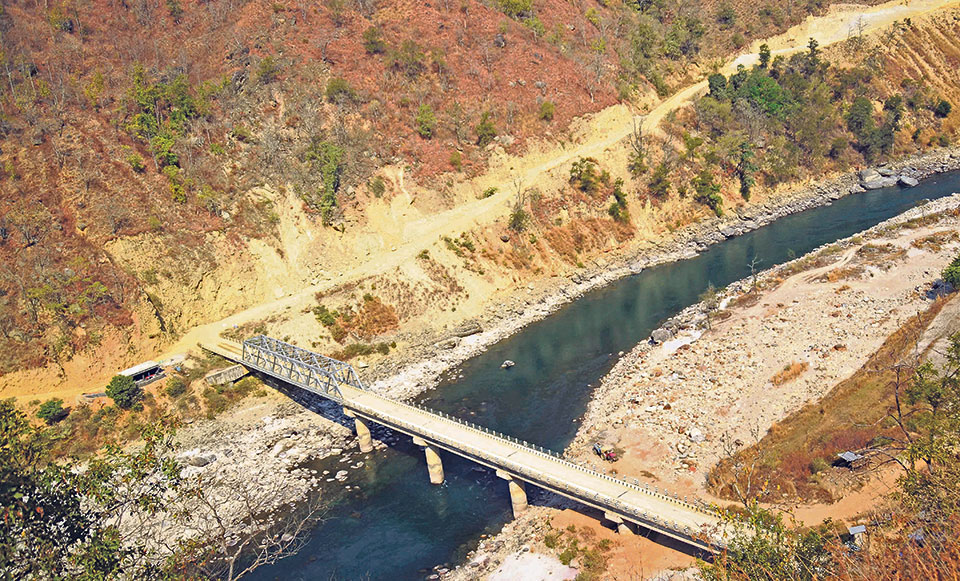 A newly constructed bridge in Panchthar district in this recent photo. Expansion of road network in Province 1 has interlinked many districts, making travelling faster and comfortable. Photo: Giriraj Baskota/Republica

PANCHTHAR, Feb 6: Trilochan Adhikari of Panchthar district is quite happy that reaching Kathmandu, the capital city, from his village is going to be quite easy now. This has been possible due to the expansion of road network to the nearby villages and towns of this remote place in the eastern part of Nepal.

"This happened sooner than I had expected," said Adhikari of Chyangthpu village.

Though there are promises which the government has not yet fulfilled, the scenario is not that grim either, notes Adhikari.

"Some really good things are happening too."

Easy mobility is sure to bring prosperity to this village. Over a dozen of new routes have come into existence near this village. With this, new market zones have developed.

"We had reach far-away places to buy essential stuffs earlier. Now, things are different thanks to the roads," he added. "Now those roads need to be blacktopped."

"Though the roads run through the rough terrains of the mountains, we are very happy with the new development. Roads are the gateway for change," he said.

Even though the ongoing construction works are creating hassles for people at several places, the recent development has been taken positively. Such roads connecting to the highway was a long demand of the locals.

"Some roads are not yet operational. But after the construction of all those roads, the situation here will be totally different," Adhikari stated.

According to Abhiman Mulmi, project chief of the road division office, Fidim, reaching Kathmandu from the eastern hills is going to be very smooth in just two years.

"We are working on that. It may take two years to complete the construction of the roads and blacktop them," he said.

Mulmi notes that the new routes of short and long distances in the province have relieved a lot of people. After the new roads get the final touch, things will become even better.

It is estimated that the distance between Chiwabhanjyang and Kathmandu would be just 790 kilometers once the roads get completed. The under-construction roads will connect Chiwabhanjyang to Khurkot through the Mid-Hills Highway. From Khurkot to Kathmandu, there is the BP Highway. The road division is also opening an alternative track from Khurkot to Dhulikhel via Ramechhap.

New routes made after proper calculation and scientific study have well linked Panchthar, Tehrathum, Dhankuta, Bhojpur, Khotang, Udaypr and Sindhuli, among other districts in eastern Nepal. The roads through those districts are either being upgraded or blacktopped, according to Mulmi.

"Those roads finally get connected to Kathmandu. It could be an alternate to the East-West Highway," said Mulmi.

Minister for Economic Affairs and Planning of Province 1, Indra Bahadur Angbole, meanwhile stated that no part of the province will remain a remote area now. With the road connectivity, new avenues for prosperity have opened.

"Now those roads are going to stop the trend of migration. People won't see reason to step to the plains," he said.

Migration from the hills to the plains is very common. People in this region opt for migration in search of good opportunities and better life.

"When roads reach your doorstep, your lifestyle just changes, opportunities follow you. So, we are hopeful that the hills won't be ignored anymore," Angbole said.

He even expressed hope that the hill areas could be a great business hub now. “Hills have the potential to become business hub," he said.

According to the engineers associated with the projects, roads in the remote villages of the hills are going to completely change the face of the landscape. And this has actually already happened at some places. There are already double-lane roads in some villages and towns.

"Contractors should work honestly to complete the work on time. And making them accountable is the job of the concerned authority as well as the civilians," said Amrita Bastola, a local of Fedapa village.

"The new roads have given us a great respite. Some are still under construction and we need to be alert to ensure that the work goes smoothly," she added.

KATHMANDU, May 10: Bauddha area in the capital turned into a battleground Thursday after police baton-charged the agitating locals who... Read More...

Two arrested on charge of rape
50 minutes ago