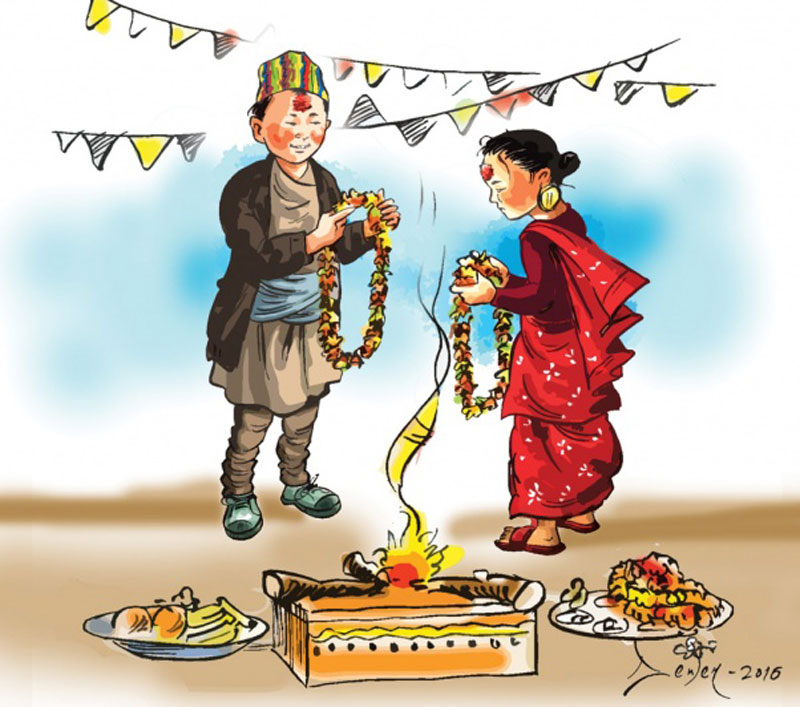 According to HRW report, 37 percent Nepali girls marry before 18, while 10 percent marry before 15
Nepal was all over international media after the release earlier this month of Human Rights Watch (HRW)’s report on Child Marriage, for being “unsuccessful to curb child marriages.”

It has created suspicions about what government and international agencies are doing in Nepal to stop child marriages.

According to the report, 37 percent of Nepali girls marry before they turn 18, while 10 percent marry before they reach 15. It is estimated that 11 percent of the boys also get married in their teens. This report reminded me of two districts where I have been—Sarlahi in the southern plain and Bajhang in the far western hills. What I saw in these two districts were astonishing.

Let me start with Sarlahi. Anil Musahar, 16, is a married man. His wife Pratima is 15 now. They have a baby of two weeks; and it’s their second baby.

The first baby died immediately after birth. They got married two years ago. Anil doesn’t have parents both of whom died while Anil was still a small child. His maternal uncle and aunt looked after Anil, the only son in the family.

Both Anil and Pratima are from the same village. They grew up together, playing with each other. “Actually we fell in love, and I thought why not get married as she will be cooking for me and I can go out and work?” Anil said. “My uncle and aunt welcomed my decision.”

“Even my parents were not against our marriage,” said Pratima. “It was not a new case in the village.”

Why did you plan for a second child so soon? “It was just fate,” she said.

She never visited any health-post, which is a 10-minute walk from her home. It’s not just her. No one in the village goes for regular check up during their pregnancy. Most don’t even go one for check up despite the government provision for free health service for pregnant women including transportation cost and child-delivery benefits.

It’s not just Anil and Pratima who are not unmarried. In their village there are hardly any unmarried young girls or boys. Nearly all of them marry in their teens.

Around 60 families of Musahar community living there all share similar stories.

I met another young man in the village, Dashain Musahar. He is 14. He had been married five months ago. They were already expecting baby. “It’s obvious that we will have a baby soon as I am married,” he said. According to him after getting married he is feeling “more responsible”. “I have to work now for my family. I will soon have a child so it’s also for his future,” Dashain said.

I asked him, doesn’t it affect your education? He said, “I never went to school.”

“You?” he asks his wife, Suchitra.“I haven’t even seen a school,” she answers.

The HRW report points out lack of education as one of the major reasons of child marriages. Surprisingly, no one goes to school from this village.

If you are looking for 100 percent illiterate village, then, there couldn’t be a better example. I was there last month to produce a program for BBC Media Action’s discussion show Sajha Sawal.

I had a different experience in Bajhang district. It was a complete opposite experience from Sarlahi.

Manju Okheda got married at 15, while she was in class 8. “I stopped going to school as I have a small baby and my husband works in India,” she said.

After spending 10 days in Bajhang district, it was clear that things have changed now.

Earlier parents were forcing their children to get married early but now the children themselves are choosing their partners.

When we visited Sunnipipal Secondary School, we found almost 40 percent of students appearing for School Leaving Certificate exam were married.

“There’s a superstition in many families here who think if their daughters are married before the first menstruation period then they will go to heaven after death,” a couple of students shared with me.

A club was formed to campaign against child-marriage. But then the chairperson of the club ‘eloped’ with a boy of her age after which the club couldn’t properly function, according to a teacher.

The police can file complaints if they hear about a child marriage, even if no one formally lodges a complaint. Yet the police seemed unusually passive in both these districts.

Likewise, the dozens of NGOs working there seem not to have made much difference to the state of child marriage there. My experience suggests that only a strong collective effort combining the expertise and capabilities of government bodies and I/NGOs working in this sector is likely to work. Piecemeal approaches, as we see, are foundering.