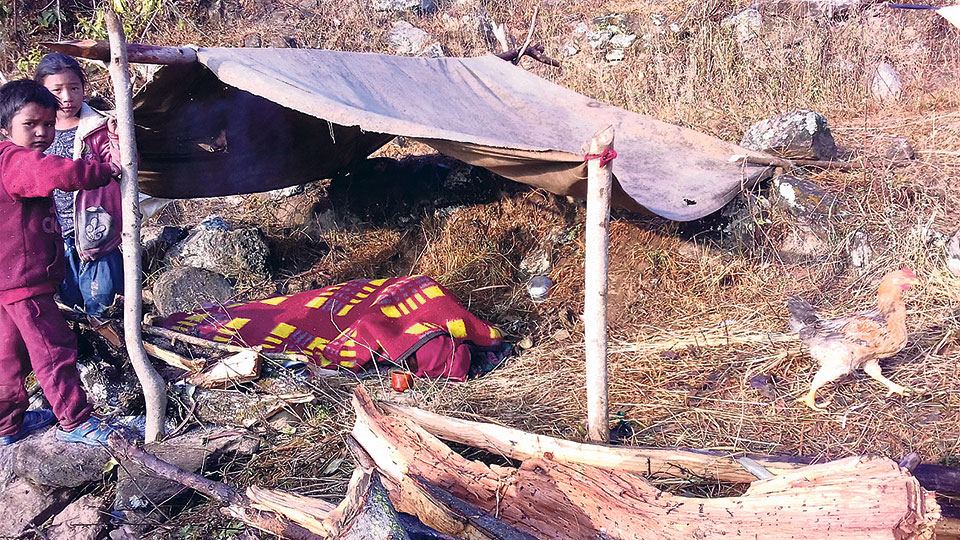 A menstruating woman sleeps under a separate tent in Nandegada forest of Achham last month. She had her period when the family from Pandusain in the highlands of Bajura was heading for the lowlands in Achham to escape the winter. (Kamal Khatri/Republica)

DOTI, Feb 1: On January 19, a woman and her two sons died of asphyxiation when the menstrual hut they were sheltering in caught fire while they were asleep. Amba Bohora, 35, along with her sons Suresh, 9, and Ramit, 7, died a tragic death, shocking many.

Amba was banished to the chhaupadi shed because she was having her period. The two boys accompanied her as they were used to sleeping with their mother. With the nighttime temperature plunging, she had lit a fire to keep them warm, and the smoke asphyxiated all three of them. Amba’s husband was working abroad.
A similar incident occurred in Purbichauki Rural Municipality-5 of Doti district on Wednesday. Parbati Bogati, 21, was also banished to a menstruation shed and likewise was asphyxiated. According to police, she too had lit a fire to fend off the hypothermic cold and was asphyxiated when her bedding caught fire as she slept.

DSP Lal Bahadur Dhami at District Police Office Doti informed Republica that the woman’s husband Shankar Bogati was also working abroad. When Parbati did not come out even late the next morning her sister-in-law went to see and found her dead.

Like these two women, there are dozens of women who have died untimely deaths in chhaupadi sheds. As per available figures, 12 women have died in this fashion in Achham district alone. In Dailekh also two women died in menstrual huts within a span of two months last year.

Every year, a large number of women are dying in chhaupadi because of asphyxiation, snakebite, burns and the sheer cold. Others have been victims of rape and sexual violence within the confines of the menstrual hut.

Last July, a 15-year-old girl in Barahatal Rural Municipality-6 was gang-raped in her chhaupadi shed.
“The five days in the chhaupadi shed are a torture,” said Maya Kunwar, a women’s leader in Doti. “It is a narrow space and you have to sleep there without proper covering.” Most chhaupadi sheds are located away from human settlement areas where venomous snakes and insects are not uncommon.
The government has criminalized chhaupadi confinement, but 50 percent of women in Accham are yet to abandon this ill practice.

Attempts to hide menstrual deaths and accidents
Last May, Parbati Budha, 18, of Turmakhand Rural Municipality -4, Achham was bitten by a  poisonous snake while in chhaupadi and died. At the suggestion of locals and representatives of the local unit, members of her family performed the last rights before the police could learn about the incident. The family was told to hush up the case as it could harm their good name and that of the local unit.

A year earlier, Gauri Budha, 22, of the same rural municipality had died a similar death. Local villagers tried their best to hide the incident for the same reasons, but failed. But there were several other such instances which don’t come to light due to social pressure. “Many tragic chhaupadi deaths do not become public while others come to light only months later,” said Gita Kunwar, a local journalist.

In December 2016, then prime minister Pushpa Kamal Dahal had issued a press statement expressing concern over Dambara Upadhyaya, 26, of then Timalsen VDC-7. She had asphyxiated in a chhaupadi shed.

It’s not that media stories about chhaupadi and publicity campaigns run by various organizations do not move the public in the far west of the country. But they do not dare to get rid of the practice. And the major reason is deep- rooted superstition. They fear that the deities will be offended if the chhaupadi ritual is not observed. Those who dare to speak against the practice are often ostracized by local society.

28 chhaugoths demolished in a single ward

DOTI, Jan 14: Twenty-eight chhaugoths have been demolished at one ward alone of Badikedar rural municipality under the campaign to... Read More...

DAILEKH, July 29: The government's failure to implement the Supreme Court (SC) order against the Chhaupadi practice has given continuity... Read More...