In the winter of 2015, there were many cases of Iranian civilians freezing in the cold and dying horrific deaths. That year alone thousands of Iranians lost their lives to bad weather conditions. This came as a result of recession, high rates of inflation, and increased unemployment due to which the civilians of Iran were unable to afford warm clothing. As a response, young Iranians in Mashhad in Iran conceived an idea of charity to help the needy and poor get through the winter.

They set up a wall and called it ‘Divar-e-mehrabani’ (The Wall of Kindness). The idea was simple: Hang up discarded clothes so that they could be picked up by those in need. Passersby would leave clothing items they no longer required and they would be put up for display along with other such garments. The homeless and the needy could then take their pick and walk away with whatever they needed.

What began as a simple act of charity soon gained traction and inspired similar movements in various countries around the world. Such walls have been set up in Bangalore (by name of ‘Karunya gode’), China, India, Kashmir and others. There has only ever been one rule and that is inscribed upon all these walls – Leave if you do not need and take if you do.

Any momentum the Wall of Kindness gained, the major creditors have always been the younger people. From devising the idea to setting the wall and spreading word over social media the youths have been the instigators and the workers. Like thousands of youths on social media, Ojashwi KC (law graduate), Binu Karki (nurse), Deepika Parajuli (engineer) and Arpana Karki (a student of Public Health) appreciated the concept of the wall. Over a cup of coffee at a cafe they discussed the idea knowing full well the condition of people from low-income backgrounds in Nepal. The very next day, they started making plans to set up a wall here in Nepal itself and thus came about ‘Sadbhav ko parkhal’.

“We all have these moments where we think we should do something. There are too many problems and a lot more complaints. Until we act on them, they will only remain problems. We knew about the troubles of people with limited means and we knew of a way to help. It was all about acting on it,” says Ojashwi. The next step was to prepare the setup. They brought in some old clothes from their own homes, bought some markers to make a chart and set up a wall in Chabahil, Kathmandu.

People didn’t understand what the clothes were hung up for and, for the first few hours, they hesitated to approach the wall. But when they explained that the clothes were up for taking and free of cost, they began opening up to the idea. The intent was clear from the beginning – letting only those who could absolutely not afford these clothes take them. “We were very firm on this right from the start. The clothes were for the needy,” adds Ojashwi.

Clothes and shoes were put up on the wall and it wasn’t long before they ran out of everything they had brought in. The takers were laborers, porters, beggars, those who sat on the footpaths with a weighing scale all day long and the homeless. Most lived out on the streets with very few layers to protect them from the harsh cold of Kathmandu. “Some would pick clothes and say they would sleep a little better that night. For us, those words meant a lot and we vowed to set up more walls,” says Ojashwi. Passersby dropped by and inquired as to what they were doing and upon learning of their intent brought in clothes they didn’t need. “The support we received was unlike anything we could have anticipated,” she adds.

Since then they have set up such concept walls at Boudha, Basantapur, Swayambhu, Gajuri, and Damaipata (a Chepang dwelling) in Dhading. Their next and final wall (since winter is almost over) was set up in Lalitpur on Thursday, January 31, 2019. The clothes they have distributed since their first wall came from organizations that had piles of clothes with them and no one to entrust them to. Additionally, they have also reached out to people through social media and held collections at various locations. They spread notices of the walls through word of mouth, social media promotions, and request locals to spread the word too. Arpana, who studies in the US (and thus cannot be physically involved with the project) helps out with promotions on social media platforms.

For them, honoring the integrity and dignity of an individual is just as important as their distribution task. “We don’t want them to compromise on their sense of self. They may be picking up someone else’s clothes but that should never hurt their pride,” says Ojashwi. It is so that they have had to pay extra attention to the clothes they put up on the wall. “Once we bring in a haul from a collection we take the clothes to our homes and spend an entire day sorting and examining them. Some are washed and some are stitched. Those that are too old are discarded,” she explains.

Binu further explains that they have especially started paying attention to it because of a recent incident when a porter picked up a jacket and upon finding the chain broken took offence. “That was negligence on our part and it was then that we realized what certain actions can be interpreted as,” she says. So being vigilant has been important in their campaign. They have also distributed blankets, beddings and, very recently, they have added toys to their inventory. “While their parents were choosing clothes, kids would often ask if we had something for them. We could not ignore their requests so we decided to add some toys for them,” says Binu.

Originally, the Wall of Kindness is permanently stationed and anyone can put up their garments to be picked up by those who need it. But Ojashwi, Binu and Deepika have set up their walls as temporary stations and they monitor all activities themselves. “We have had instances when people have brought in sacks to fill with clothes. Their plan was to sell them at lower rates. So now we stay at our stations and oversee everything,” explains Binu.

In various countries the Wall of Kindness contains open fridges stacked with food and open bookshelves for children from low-income families. Although the wall in Lalitpur is their last for the season, they are very keen to give continuity to their work. “We worked with a few markers and our own personal savings and it was only an attempt to act, to not just sit and complain but actually do something to solve a problem,” says Ojashwi. This work, they say, was only a small attempt at helping. They have reached close to 450 people in only a few weeks and knowing that so many people went to bed a little more comfortably than the previous night motivates them to work even harder in the future.

The Wall of Kindness is cited in the media as a charity work phenomenon. And we believe it is a phenomenon like no other. In a world where walls have only served as dividers, the Wall of Kindness is a contradiction of sorts. It’s a wall that doesn’t separate but rather brings people closer together. We definitely need more of those. 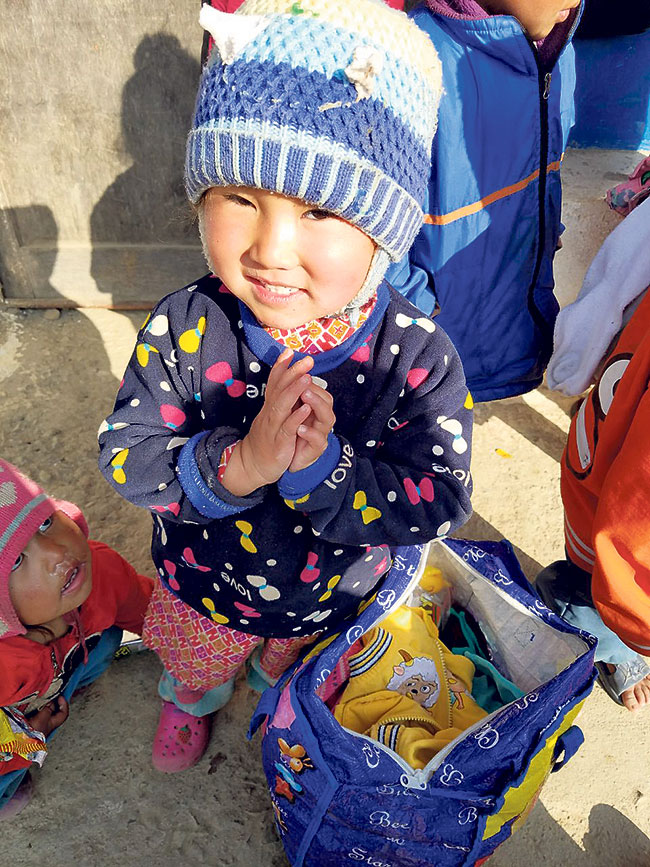