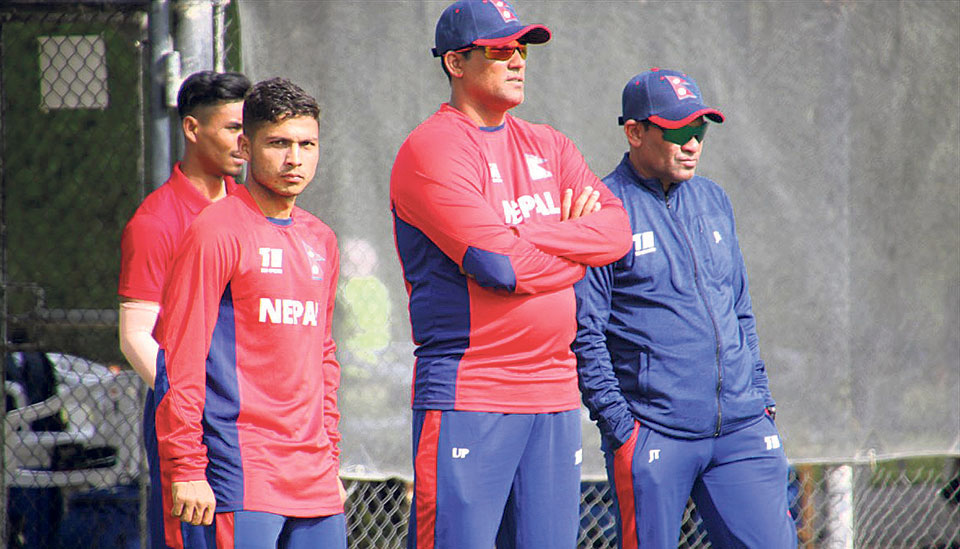 Nepal secured the historic first One-Day International (ODI) series win against the same team earlier this week, winning the latter two after losing the first match. Nepal has more T20 wins compared to ODIs. With the performance against the hosts in the 50-over format, Nepal starts favorite in shorter version of the game.

It will be an opportunity for Nepali players to show consistency going into the T20 format and win the series to wrap an outstanding limited over tour in its second outing away from home.

Nepal had drawn two-match ODI series against the Netherlands in August last year.

Nepal last played a T20I bilateral series against the Netherlands in 2015 when it earned T20I status for two years after reaching the qualifying round of ICC World T20 in 2014. Nepal lost the series 3-1.

Seven players from that squad that toured the Netherlands are set to feature against the UAE. Skipper Paras Khadka, Gyanendra Malla, Basant Regmi, Pradeep Airee, Binod Bhandari, Sompal Kami and Karan KC played that series against the European ODI nation.

Nepal
Nepal had announced the same 16-men squad for both formats of the game. Of them, Pradeep Airee, Avinash Bohora and Bhim Sarki are yet to make their debut. Youngsters Pawan Sarraf and Sandeep Jora made their respective debuts in first and last match of the ODI series.

Vice-captain Gyanendra Malla’s cameos at the top of the innings in last two ODIs, where he scored 44 and 31 runs, respectively, hints at a return to form.  His team Lalitpur Patriots’ won the last Everest Premier League back home. However, his opening partner Binod Bhandari might get an axe and replaced by Pardeep Airee in the same wicket-keeping-opening-batsman role. Pradeep had good scores in T20 events and Bhandari has dismal returns in the ODI series, down on runs as well as strike rate.

Despite hinting at opening the batting in T20s, Skipper Khadka might continue at No. 3 after getting record century in last ODI in the same position. Dipendra Singh Airee has the most unsuccessful series since his debut as he could muster just 16 runs in three matches. However, he has been the most prolific scorer in the domestic T20s which might help him retain his place.

Similarly, Sundeep Jora, who made his debut in the last ODI scoring 19 runs which included a six, has one of the best strike rates in Nepali domestics. He is also favorites to start ahead of other contenders. Likewise, Rohit Paudel, Sompal Kami and Karan KC will fill other places in the starting XI, whereas globetrotter spin sensation Sandeep Lamichhane will lead the bowling attack.

The only place where Nepal can experiment is including young and equally exciting batsman Bhim Sarki in place of Aarif Sheikh. Aarif, who played crucial innings in the ODI series, took time to get going and finished with inferior strike rates compared to his counterparts. Sarki is regarded as technically solid batsman who changes gears as the innings progresses.

UAE
The UAE missed the experience, guile and performances of three veterans -- Mustafa, Ahmed Raza and Rameez Shahzad -- in the ODI series loss against Nepal. The shortened format will help the young UAE team to address the longer format’s inconsistency and offer better challenge for highflying Nepal. Skipper Naveed remains its biggest match winner with his involvement in various T20 leagues around the world like Lamichhane. Similarly, Ashfaq and veteran Shaiman Anwar can be dangerous on their day as seen in the last ODI. Anwar together with hard-hitter Mohammad Boota recovered the UAE from a precarious position to collect more than 100 runs in last 10 overs while putting up a decent 254 runs for the UAE on board. Mohammad Usman and CP Rizwan, who both played crucial innings to rebuild the UAE innings in the last ODI, are favorites to be retained for the first T20 match.

In bowling department, Imran Haider was the pick of the bowlers for the UAE side in the 50-over format. The legspinner consistently outfoxed most of the Nepali batsmen. Similarly, Naveed has done consistently well against Nepali cricketers in different domestic leagues. Amir Hayat troubled batsmen in first two ODIs with his short pitch stuff before going off-boil in the last match.  Likewise, one between Zahoor Khan and Qadeer Ahmed will fill in the final spot in the bowling lineup of the Gulf state that both had mixed ODI series.

VERDICT
Nepal skipper Khadka remains grounded on Nepal’s against the fellow Associate side. “We are used to this format, but international cricket is more demanding. The conditions are different, and look more suited to the home team. So, we have to start all over again.”

He hinted at a few changes in the playing XI to complement the shorter format.

“We have big squad and changes in the playing XI are expected. We will have to use players appropriately.”

Similarly, Nepal spin star Lamichhane has shared his ambitions to help team with his bat as well. “I am focusing in batting also. You never know, team may need it. The belief is more than before that Nepal can do extraordinary things in international cricket.”

If Nepal can overcome first match jitters ahead of any series, the visiting team can make a real go for a clean sweep. However, a hard-fought 2-1 win is expected.

KATHMANDU, Feb 1: Nepal registered a victory in the second match of the ongoing T20 International Series held at the ICC... Read More...