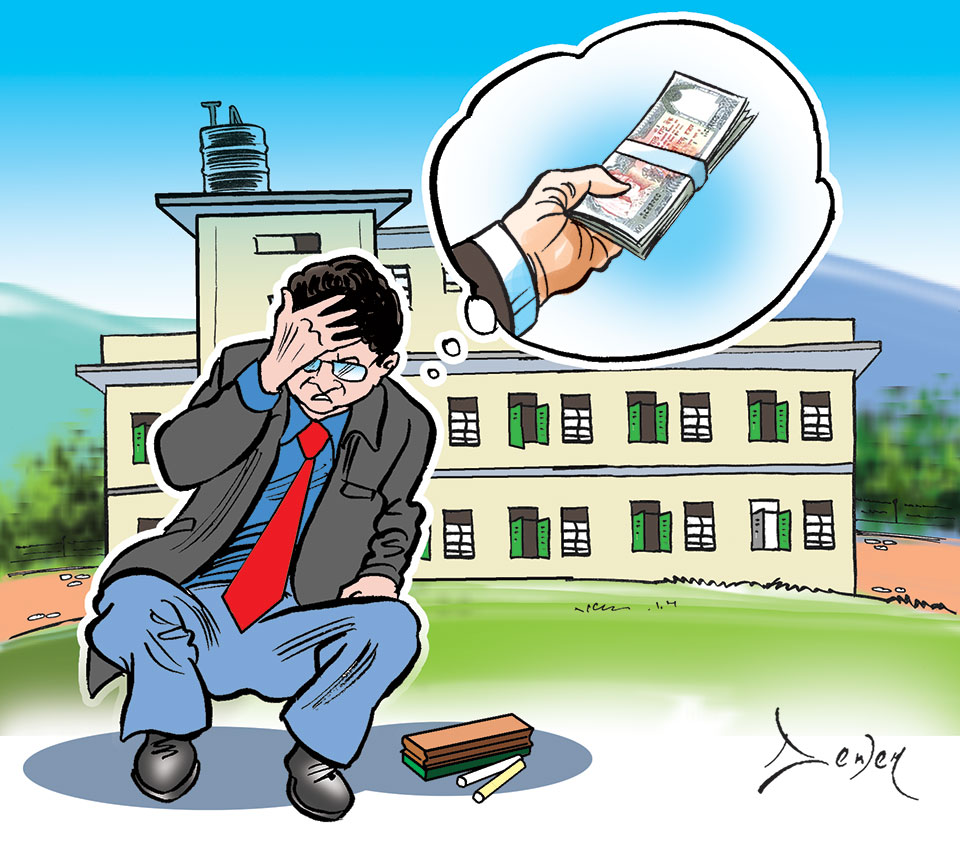 KATHMANDU, Jan 30: Private schools in Kathmandu have been paying meager salaries to their teachers although they charge their students exorbitant fees, Republica has learnt.

Republica’s investigations into a number of schools in the capital show that most of the teachers are receiving only one-third of what their counterparts in public schools make and they are compelled to work eight hours a day, six days a week.

The private schools in question are charging their students several times higher than students in government schools.

Several teachers that Republica interviewed complained that their salary wasn’t enough to meet their personal needs, let alone the daily ends of their families.

Anusha (name changed), a full-timer at Guhyeshwari-based Atlantic English Secondary School, said she was only getting Rs 8,000 per month, which is one third the minimum prescribed by the government.

The salary barely covers her daily expenditure on food and transportation, she said. Anusha, like all the others interviewed by Republica, spoke on condition of anonymity for fear of losing her job.

“It’s been two years since I started working here. But the school administration appears reluctant to increase my salary. Once we had a group meeting with the administration regarding pay. But they declined to give us a raise, citing low student enrollment. It’s frustrating” she said.

The existing rules require both government and private schools to pay a monthly salary of Rs 20,674 to a primary school teacher, Rs 29, 764 to a lower secondary teacher and Rs 38,636 to a secondary-level teacher.

Most of the underpaid staff are well aware of the exploitation but they are reluctant to take on the school administration out of fear of being sacked.

The situation was not much different at Manakamana Higher Secondary School, another reputed school, located at Dakshindhoka, Gokarna.

Sarita (also name changed) is a primary level teacher there, and she earns Rs 10,000 monthly.

“We know this is exploitation. But there’s little we can do. I console myself that something is better than nothing,” she said.

In contrast to the miserly amounts it pays its teachers, Manakamana Higher Secondary has been charging its students stiff fees.

The school charges Rs 88,825 annually for a nursery pupil, including admission fees, monthly fees, exam fees and transport fees. A 10th grader has to pay at an annual level Rs 208,275.

The two schools are just the tip of the iceberg. A majority of schools, including high-end private schools, have failed to honor the minimum wage although they charge students ridiculously high amounts. Lesser known schools are paying teachers as little as Rs 6,000 monthly, far less than bottom rung staff in government offices.

The stakeholders appear to be well aware of the widespread exploitation but they are doing nothing about it.  Officials at PABSON, one of the associations of private schools in the country, said teachers would remain susceptible to exploitation until the government brings uniformity in fees and minimum teacher pay at all private schools.

At present, the salary is decided through mutual agreement between teacher and school.

However, PABSON President Bijaya Sambahamphe said that allegations of exploitation at schools were overblown.

“Pay is directly proportional to qualifications. It’s true that inexperienced teachers aren’t being paid well, but qualified teachers are earning a good salary,” said Sambahamphe. He admitted that PABSON and other stakeholders are partly responsible for the current state of affairs.

“There’s a rule that every private school has to invest 60 percent of its earnings in salary and services but we have no idea whether they are complying or not.”

PABSON officials also said the problem of low paid can only be resolved if schools base the salaries they pay on the amount of fees they charge students.

Out of the total 35,601 schools in the country, 6,566 are privately owned. All private schools in Kathmandu district have increased their fees under different heads including school building repairs, sports, extracurricular activities, first aid, computer, library, transportation and so on, according to Kathmandu District Education Office.

Baikuntha Aryal, spokesperson at the Ministry Of Education, Science and Technology (MoEST), said the law requires private schools to pay the same wage scale prescribed for teachers at public schools. He said the ministry and the department concerned reserve the right to scrap licenses for schools not abiding by the law. Despite Aryal’s claim, Republica couldn’t independently confirm if any school has been booked for flouting the pay related law.

“The law also requires private schools to hire licensed teachers. But they have been hiring the inexperienced and unqualified and paying them very little,” said Aryal.

Teachers affiliated to Far-western University not paid since 11 months

TIKAPUR, May 22: Teachers of educational institutes affiliated to the Far-western University have started protests alleging that they have not... Read More...

KATHMANDU, Mar 30:  The examination of temporary teachers has been postponed indefinitely. ... Read More...

KALIKOT/ SINDHUPALCHOWK, April 10: Many teachers across the country have shown a keen interest to file their candidacies for various posts... Read More...