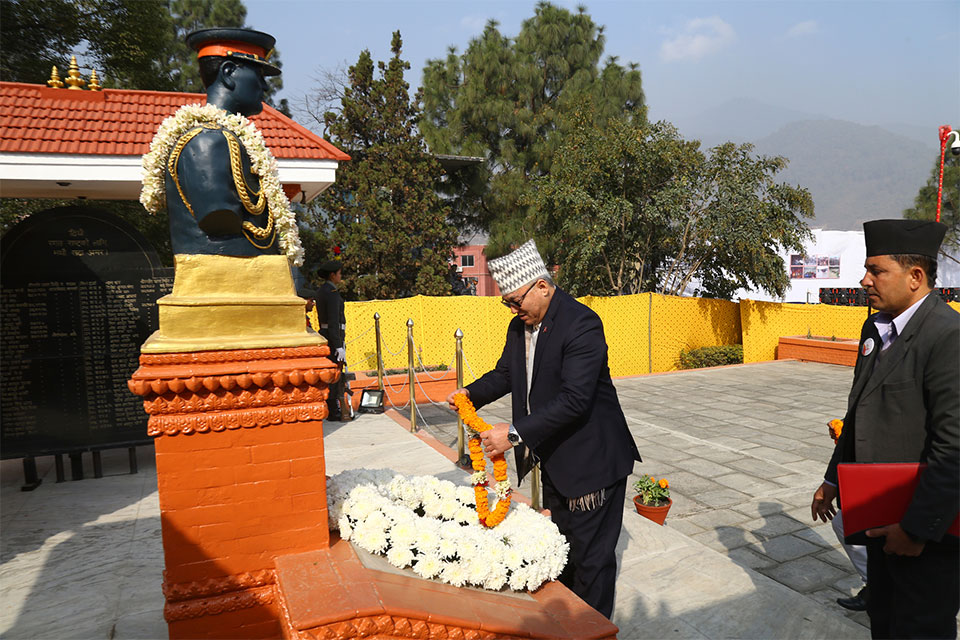 Home Minister Ram Bahadur Thapa laying wreaths on the statue of police personnel killed in the line of duty on the occasion of 18th Anniversary of the Armed Police Force Nepal at the headquarters, Halchowk on Tuesday. (RSS)

Prime Minister said that the cabinet decision of declaring police personnel as martyr has developed the culture of respecting all and reconciliation as well as given priority to respect and relief to martyr’s families.

On the occasion, he praised the progress made by APF in a short period. The Prime Minister said that since some issues of peace process are still to be resolved, it’s high time to heal the wounds of the conflict. He said, “Any activities to disrupt peace, spreading violence in the society, terrorizing people and hampering the national integrity in any pretext would not be allowed.”

Saying peace is common expectation of all Nepalis, PM Oli said that country’s prestige and respect has increased at present.

He further said that the World Economic Forum remembered Nepal for the first time in 49 years, adding that he clearly put Nepal’s though, view, situation and expectation in Davos meeting.

Directing the APF to carry out activities after coordinating with all security bodies, Home Minister Thapa said that the government has a plan to increase ‘Border Outpost’ to control crimes in border areas.

He further said that the Ministry has forwarded plan to make the temporary companies permanent one and to make brigades effective.

Saying necessary preparation was underway to establish high summit search and rescue school for the search and rescue in disaster at high-hilly and mountainous areas, the Home Minister also asked the APF to submit plan at the Ministry for the same.

Likewise, APF Inspector General, Shailendra Khanal, said that the APF was committed for country’s peace and security by following the PM and Home Minister’s suggestion and direction in letter and spirit.

The APF has honored Haribansha Acharya and Madan Krishna Shrestha on the occasion of its 18th Establishment Day. They were honoured for their significant contribution in development of society through art.