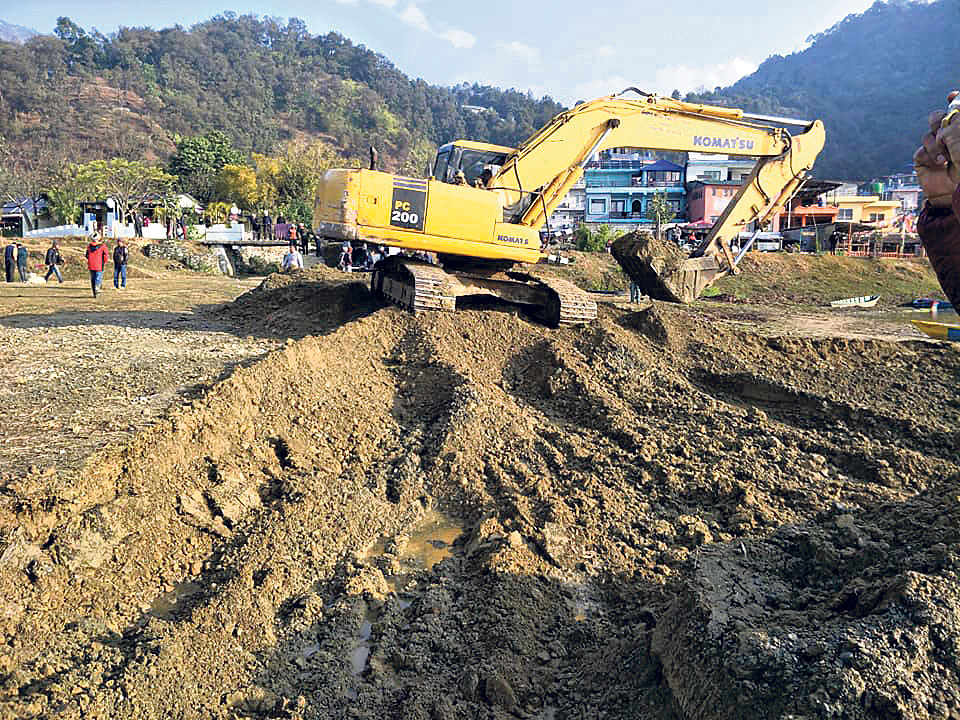 An earth mover at work on the shores of the Fewa Lake in Pokhara on Monday. After a Supreme Court order, the Pokhara Metropolis has started reclaiming the lake's land encroached by private individuals.

Subedi claimed that excavators were used to remove soil from the lake in accordance with the decision made by the Supreme Court (SC) on the conservation of the lake. He added that the metropolis will run soil removal efforts as a campaign to conserve the lake.

The conservation of the lake, which is a major tourist destination in the nation, was initiated at the behest of Chief Minister Gurung. He said that all the three tiers of the government should work together in order to conserve the lake. Similarly, he also said the decision of the SC should be implemented.

Last Wednesday, the Council of Ministers of Gandaki Province had formed an 11-member committee led by Provincial Tourism Minister Bikas Lamsal for the conservation of the lake as well as the implementation of the SC decision. Members of Provincial Assembly, mayor of the metropolis and secretaries of the ministry are members of the committee.

Mayor of Pokhara Metropolis, Man Bahadur GC, claimed that the soil from the spot where the Firke River and various seasonal streams meet the lake is the initial action for lake conservation. He added that conservation of the lake will be conducted in coordination with the committee formed by the provincial government.

Back in April last year, the Supreme Court had ordered the government to demolish illegal structures built around Fewa Lake and demarcate the original area of the lake within six months of receiving the full text of the court order. The court order also called for the scrapping of private land ownership of any land falling within the original demarcation of the lake. But there had been no progress.

The report prepared by a study committee led by Bishwa Prakash Lamichhane had determined the lake’s total area as 6,503,779.05 square meters and set dam side in the east, Morebagar in the west and Kharpoudi-Chankhapur in the north as the boundaries of the lake.

Economy is on the mend: Governor Adhikari
27 minutes ago