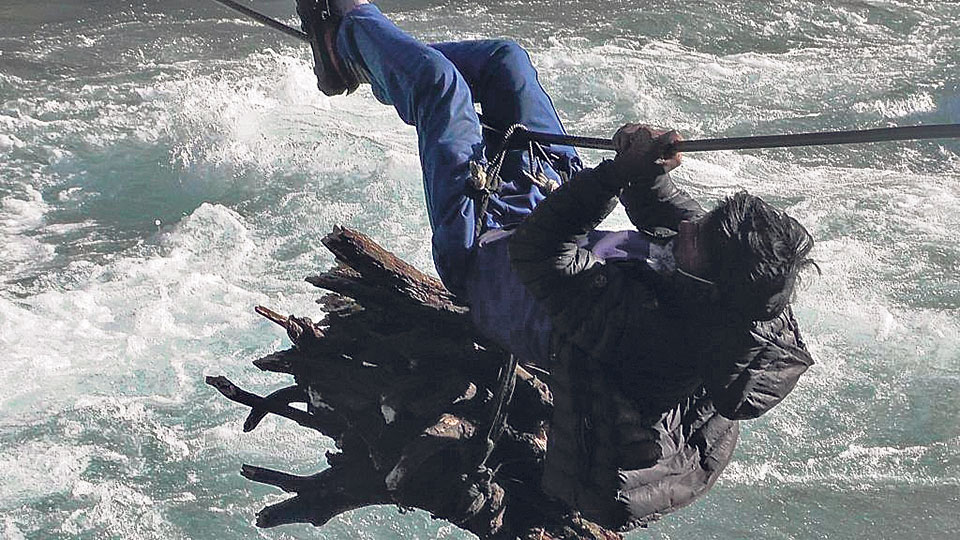 One of the first promises K P Sharma Oli made when he became the prime minister for the first time in October, 2015 was related to replacing tuins—the dangerous crossings over the rivers made of some combination of iron wires—with suspension bridges. The decision had come against the reports of children having to go across these dangerous crossings risking their lives and even dying. He had promised that all tuins will be replaced within two years.  Huge amount of budget, over three billion rupees, was allocated to replace them and to build about 187 with suspension bridges.  Oli had to resign within nine months. But this promise has not been completely met even nearly a year after he returned to power with two thirds majority support in the parliament. It is not that there has been no progress.  A number of suspension bridges have been built replacing tuins with bridges in Dhading district. According to Ministry of Federal Affairs and General Administration’s August, 2018 report, 108 out of 137 tuins have been replaced by trail bridges. But given that people in far-flung villages still have to use these dangerous crossings for mobility, this is no time for complacency for the government.

In Karnali, for example, people have no option to using tuins because there are no bridges. Many people in Jumla and neighboring districts have lost their lives while using tuins. From Hilsa to Kawadi there are many rivers but not a single bridge, which is why people use tuins. Women have to strap children to their backs as they take to tuin. Karnali region is waiting for bridges. In Humla alone, there are over a dozen tuins, most of them in dilapidated shape.  Women, elderly and children have to rely on these tuins in many places where they are yet to be replaced. According to an estimate, at least 100 Nepalis die every year while crossing rivers by using tuins.

The government needs to put in extra efforts to immediately replace these danger traps which are in widespread use in Nepal’s Mid-west and Far-west districts. Yes, the provincial and local governments of these regions have as much to do but unless the central government allocates enough resources and accords it top priority, the positive results won’t be forthcoming.  The government of KP Oli is in a position to change this situation for good. It needs to direct the contractors and other agencies working in the field to expedite the work so that women, children and elderly in these remote places do not have put their lives in risk just to go from one place to another. It will help the government salvage is eroding public image when it becomes able to completely fulfill its tuin replacement promise. Tuins are like death traps. They need to be replaced, whether in Dhading or in far-flung villages of Karnali or the Far-west, immediately.

BIRENDRANAGAR, Aug 20: The provincial government of Karnali has launched a campaign to replace tuins (makeshift cable crossings) with suspension bridges in the... Read More...

Women in Karnali are dying due to delivery-related complications and the state response to this serious problem has not gone... Read More...