Jagat Khadka/Republica Sacks of rice stored at a food depot operated by Saipal Rural Municipality, Bajhang in this recent photo.

BAJHANG, Jan 20: ​ Birkise Rokaya, 58, was never this happy before. With food depot now in village, he thinks that food crisis won't hit his village anymore. "This was our demand for a long time now and we are glad to see the government fulfill it this year," said the local of Saipal Rural Municipality.

As per the census 2011, the population of this area, which remains covered by snow most part of the year, is just 2,181. This small community almost always faces scarcity of food, due to the lack of road connectivity.

"The shortest distance to food depot in town takes us days to reach. And that too, after walking through a very steep way. Sometimes people fall off the cliff and sometimes our mule trip off the cliff," narrates Rokaya.

During the last election, candidates came to his doorstep promising that there would be a food depot at the village itself. They also said there would be nice roads for transportation facilities. However, given the extreme weather, locals had least hope that the promise would be kept.

"I was also a skeptic of those promises. It was not a small challenge to bring road here, and similarly, having a food depot in our place was also a farfetched dream though that was our demand for many years," Rokaya said.

Rice is always in demand here and it is what is always scarce in Bajhang villages. Since rice is not produced in these dry terrains, demand for it has always been high.

"We try to exchange our other products with rice. But that's not always available. The government does not provide us with adequate rice," said Rokaya.

The other attraction of having the food depot in the village is the cost factor attached to it. When government operated depot sells rice, locals get it in subsidized rates. In one hand, they don't have to travel for days to the nearest town to get rice, and on the other hand, they get it at their home at far cheaper rates. That is why food depot had always been a major demand of the people.

After the local bodies came in existence, several rural municipalities in Bajhang have established their own food depots. Saipal Rural Municipality has just followed the footstep, to the great joy of locals.

Earlier, locals had to pay Rs 150 for a kg of rice. After the local government-operated food depot opened, they have to pay only Rs 50 for a kilo of normal category rice, without the need to take on a journey of eight days across steep mountain trails to the nearest food depot in Chainpur.

"Our people grow potato and other stuff in their farms. But that does not suffice to feed our families for more than three months. Rice is something you can rely on for longer if you can buy and store," said Rokaya.

Rokaya used to go to the food depot in Chainpur and that would take him four days to reach there. To and fro, it would take eight days for him to complete the journey.

"Eight days only when you don't have to wait there in Chainpur. Or else, it might take longer," he said. "I have gone through so much of hassles a lot of times."

Most of the people of his age are shepherd just like him. Now with only two years remaining before he becomes 60 years old, not much has changed in his life in terms of workload. Due to the lack of facilities, people in this part of our world look quite old by 60, he said.

"Life is very hard here. So, we get old sooner," he laughed. "Now this very depot is going to give us some comfort anyway." Having a food depot nearby indeed means a lot for villagers. It may also distribute other essentials like salt and oil at subsidized prices.

"If we go elsewhere to buy we will have to pay steep prices. From own food depot we will be able to buy at far lower prices," he said.

According to another local of the village Kanju Bhandari, the credit for establishing the food depot goes to the rural municipality. 'They kept their promise'.

"We are really happy about it. The representatives have kept their promise," Bhandari said. "We were dependent on mules for carrying sacks of rice and walk through narrow cliffs. Now, we don't have to take that risk," he added.

Rokaya stated that villagers are not very poor anymore. They can actually pay for the price of rice as they earn by selling yarshagumba and other herbs.

"Most of the people here harvest yarshagumba during the harvest season and earn from it. Even though we had money to pay for the rice, we didn't have access to the market," he said.

The rural municipality is yet to be connected with the road network. "The municipality brings rice here by using mules. It manages the resources for transporting the rice to the depot and we are glad that we will be able to buy from it at any time of the year," said Bhandari.

Earlier, locals had to pay Rs 150 for a kg of rice. After the local government-operated food depot opened, they have to pay only Rs 50 for a kilo of normal category rice, without the need to take on a journey of eight days across steep mountain trails to the nearest food depot in Chainpur. "These days we are eating high-quality rice in the evening as well as in the afternoon, an elated Bhandari boasted.Rajendra Dhami, chairperson of the rural municipality stated that he had been working on establishing the food depot since he assumed office. 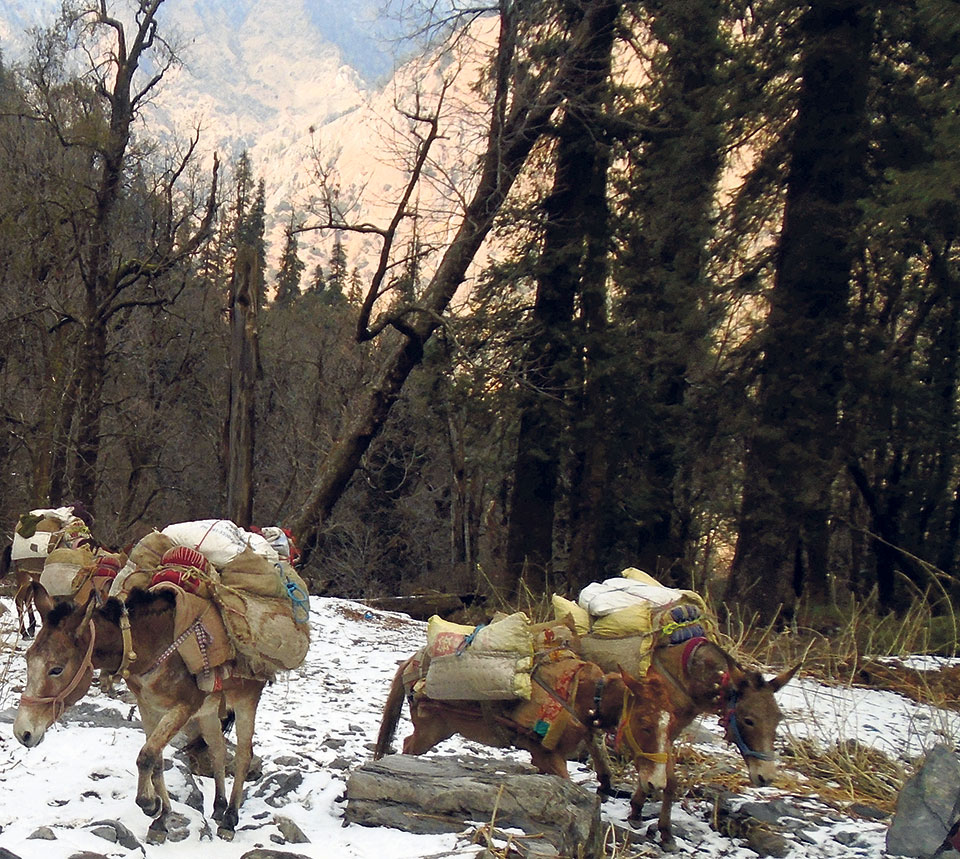