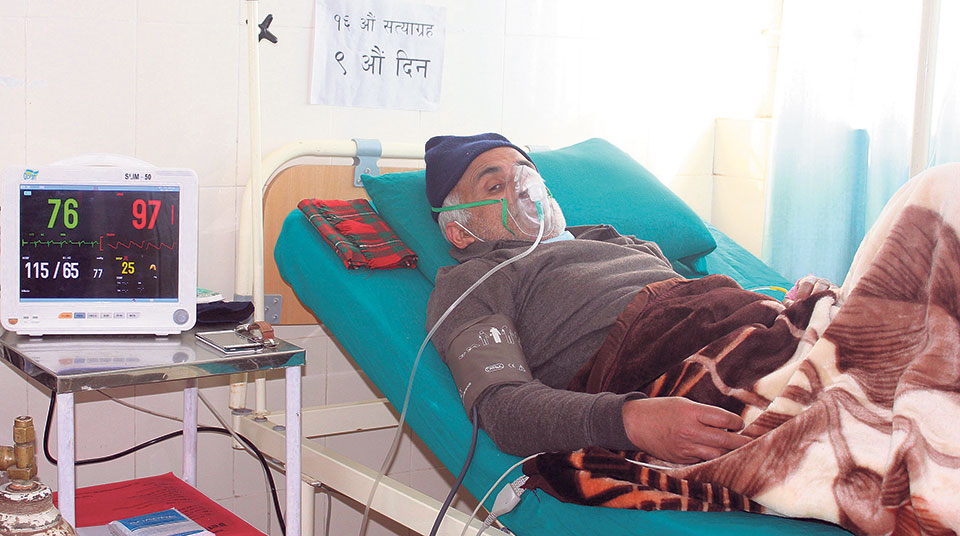 Dr Govinda KC on the ninth day of his 16th fast-unto-death at Ilam Hospital on Thursday. Photo: Bhim Chapagain/Republica

KATHMANDU, Jan 18: Lawmaker and former health minister  Gagan Thapa has said that Dr Govinda KC is neither an opponent nor a supporter of any political party.

“An old man is just fighting on for justice and to ensure people the right to good health,” said Thapa issuing a statement Thursday after organizing a press meet. “Dr KC has just raised his concern for the fundamental right of people to health, something which has been enshrined in the Constitution of Nepal,” he said.

However, the leaders and lawmakers of the ruling party have termed Dr KC an anti-communist agent, according to Thapa. “He has staged protests many times against governments of all parties including Nepali Congress. If someone sees him as being against the present government, it is just failure to misunderstand the good-hearted doctor,” he said. “Dr KC has been lobbying for quality in health services and medical education but the government has turned away from its responsibility to provide these very things.”

“Dr KC is a sage and a saint,” said Thapa. “He has fought against court decisions and against Lok Man Singh Karki in his crusade for better health care and reform in medical education,” he added, recalling Dr KC’s past achievements. ”Sadly, he has only been accused of raising an unnecessary voice.”

Citing the deteriorating condition of public schools in the last three decades, Thapa said, “We need many people like Dr KC to bring change in the country. Are we going to kill the only Dr Govinda KC we have? Mr prime minister, do you want to finish him off for standing against injustice?” he rhetorically questioned KP Oli and the present government.

KATHMANDU, Sept 28: Dr Govinda KC, the crusader for reforms in medical education has requested for the resignation of Education... Read More...