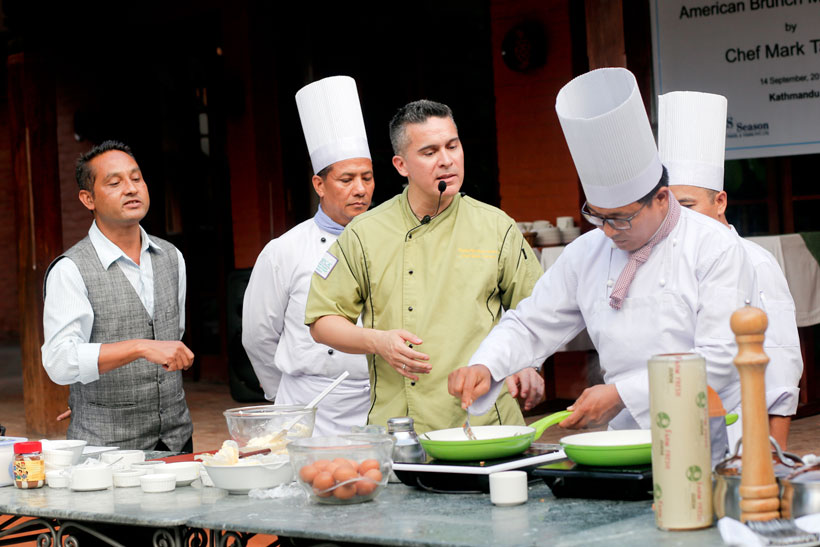 KATHMANDU, Sept 15: For many it was way past their lunchtime on a late Wednesday afternoon. But at the Summit Hotel in Kupandole, several chefs and restaurateurs had gathered in the hotel’s patio to attend a master class from US chef Mark Tafoya on cooking the big American brunch.

Throughout, Tafoya enticed the crowd and his student chefs with his friendly conversational style of talking. He kept the floor open for audience to ask questions and even invited them to join him in the cooking. Except one member of the crowd, all were either busy noting down Tafoya’s recipe or sampling the brunch menu.

“I learnt two things from Mark’s class. One, always use the blunt side of the knife to scrape off your chopped ingredients from the chopping board. Two, always be modest and accept your mistakes when you make one,” said Prakash Shrestha, owner and head chef of Silver Spoon Restaurant in Bhaisepati.

Tafoya is a personal chef who has been in the business for almost fourteen years. Right now, he is in Kathmandu for two weeks upon the invitation of US Embassy for their culinary diplomacy program. “I’m here to promote American culture by sharing my knowledge about American food,” said Tafoya.

His early exposure to cooking came when he made a Chinese egg roll with the help of his cousin and her mother. As an eight year old growing up in New Mexico, this was the first time he learnt to love food.

And he got to explore more exotic foods when he was accepted for an exchange program in France while doing his undergraduate studies at Yale University. In France, he was a student who could barely afford food on a restaurant menu. But whatever money he would save, all went to eating French delicacies.

He’s all self-taught and he mentioned that his knowledge comes from his immense desire to discover culture through food.

But the thought of being a professional chef came much later to him. Before that he was an actor in New York, sometimes cooking food for friends at their house parties. His cooking skills left his friends so impressed that they encouraged him to open his own restaurant. He considered the move. Restaurant business was risky but what if he became a fulltime personal chef? Soon he came into contact with US Personal Chef
Association that helped him realize that possibility. He would cook for people who wanted a professional chef to come and prepare food for dinner parties. Since then he has opened a personal blog, hosted a food podcast and traveled around the world as a part of US Embassy’s culture promotion program.

So, what’s the most rewarding thing for a chef who is globetrotting regularly? “I get to eat a lot, that’s the most rewarding part of my job,” Tafoya joked. But on a serious note he said, “We all come from different cultural upbringing and food is what connects us. My
mission in life is to discover foods from around the world and connect people. I may sound lofty but I believe when you discover a culture through its food, you grow to love that culture.”

Bringing something to the table