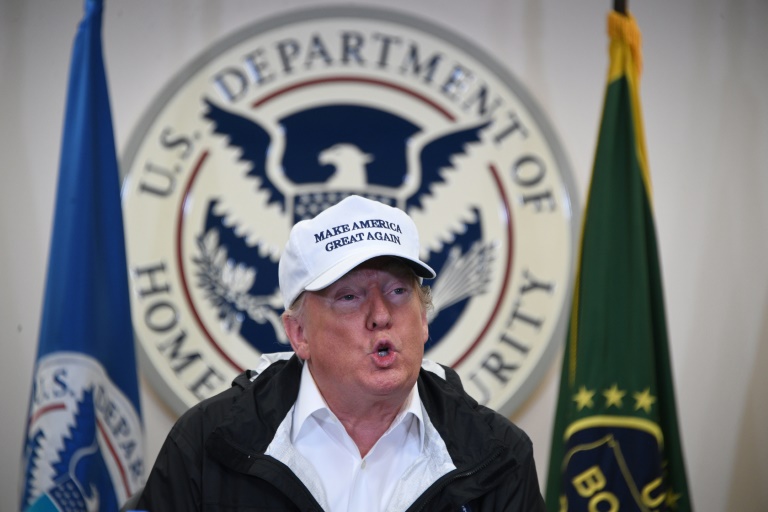 US President Donald Trump used the backdrop of McAllen, Texas, to pursue his message that more barriers on the frontier with Mexico are needed to protect the United States. Photo Courtesy: AFP/RSS

TEXAS, Jan 11: President Donald Trump has again threatened to declare a national emergency along the border with Mexico as he seeks funding for a wall he says will keep out dangerous immigrants -- his latest jab in a fight with Democrats in Congress that has now shut down parts of the government for a record-tying 21 days.

Such a declaration, almost certain to be challenged in court, would in theory allow Trump to sidestep Congress and divert money from military projects toward construction of the wall that has been a core focus of his nationalist campaign.

Speaking to Fox News in an interview broadcast Thursday evening, Trump reiterated he had "the absolute right to declare a national emergency."

But pressed on a timeline for doing so, he said he would "see what happens" over the coming days.

Analysts say the declaration would likely be challenged as a case of presidential overreach, which means the wall could still face being blocked.

However, it would give Trump political cover with his base by showing he'd done what he could to build the wall. At that point, Trump could end the shutdown and declare a win.

The embarrassing closure of parts of the US government will set a record 22 days on Saturday.

Meanwhile, on Friday, some 800,000 federal workers who are working without pay or not at all because of the impasse will miss their first paycheck since the shutdown.

Trump toured the border with Mexico Thursday to press his case for a wall and warned of murderers and gangsters spreading across the country.

Trump used the backdrop of the Rio Grande border river at McAllen, Texas, to ramp up what has already turned into a hugely messy political fight with Democratic opponents.

With typical rhetorical flourishes, Trump said that only building more walls along the Mexican border could stop an onslaught of violent crime.

"They just go where there's no security and you don't even know the difference between Mexico and the United States," he told a meeting of border patrol officers. "They have women tied up, they have tape over their mouths, electrical tape."

"If we had a barrier of any kind, a powerful barrier, whether its steel or concrete..., we would stop it cold," Trump said.

Opposition Democrats are refusing to approve $5.7 billion in wall funding, saying that overwhelming numbers of illegal immigrants do not commit serious crimes and that Trump is mainly promoting the project to satisfy his right-wing base.

Trump's refusal to sign a funding bill without money for the wall has resulted in a partial government shutdown, with hundreds of thousands of federal employees -- including air traffic controllers, the FBI and Coast Guard -- going without pay.

Even some lawmakers in Trump's Republican Party are wavering in their support for the president as the shutdown causes difficulties for their constituents.

Meanwhile, signalling he's ready to maintain the game of brinksmanship, Trump tweeted on arrival in Texas that he will scrap a visit to the annual World Economic Forum in Davos, Switzerland, which runs from January 21-25.

Trump had been expected to make a brief appearance at the influential get-together, attended by many world leaders, but said that opposition Democratic "intransigence" required him to stay home.

Trump said he was ready to expand the debate over funding for a border wall to some of the other issues surrounding the over-burdened US immigration system -- a suggestion that could open the door to working with Democrats.

"I would like to do a much broader form of immigration," he said in Texas.

But throughout the day, the frustrated president also repeated his threat to declare a national emergency and give himself authority to go around Congress if he can't get approval for the wall.

Trump, who revels in telling stories about his negotiating skills as a New York real estate magnate, has not managed to get the Democrats to budge on his demand for the $5.7 billion.

On Wednesday, he invited Democrat leaders to the White House, but walked out of the meeting.

"A total waste of time," Trump tweeted. "I said bye-bye, nothing else works!"

Chuck Schumer, the top Democrat in the Senate, told journalists Trump "sort of slammed the table," then "got up and walked out."

"Again, we saw a temper tantrum because he couldn't get his way," Schumer said.

Trump disputed that Thursday, saying "I didn't pound the table. That is a lie."

"I don't have temper tantrums," he said.

On Thursday, US media reported the White House had asked the Army Corps of Engineers to look into the possibility of diverting funds allocated for relief projects in areas damaged by natural disasters, such as Puerto Rico and Florida.

Trump declares he’ll ‘never back down’ in shutdown fight

Free WIFI in Everest Base Camp region
7 hours ago