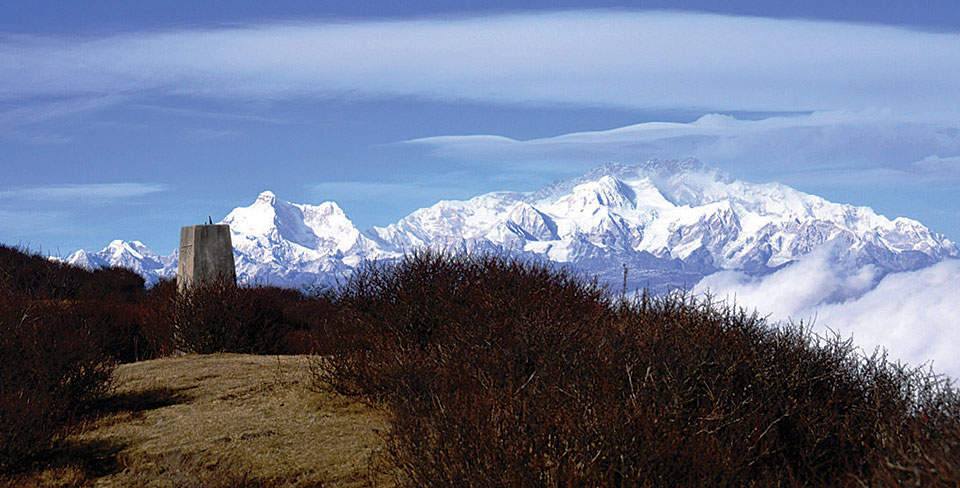 A border pillar along the Nepal India border is seen in Chatare area of Panchthar district in this recent picture. Photo: Republica

PANCHTHAR, Jan 7: Jang Rai was never assigned by the government to guard the Chartare border area. However, the pillars that separated Indo-Nepal borderline always grabbed the shepherd’s attention. “It was natural for us to check whether pillars are still there. Pillars disappear if you don’t monitor.”

But these days, Rai does not go there to herd his yaks. Other shepherds also have not dared going there either. “We have not stepped up as they are not allowing,” Rai said referring to the officials of the Singalila National Park of India.

The park is near to Chatare.  Park’s officials shooed away the yaks taken for herding by Nepali shepherds. After the officials did so several times, ‘neither yaks show interest to go’, nor the shepherds have the courage to take their herd there.

“In winter, we do not stay in the upper mountains, we stay in warm areas. Yet, we used to take our yaks for herding there. But after the officials did not tolerate us there, we have stopped going or taking our yaks there,” reported Rai.

There are a few yak sheds in Chatare. But those sheds are now padlocked. India built and operated the national park just this year. Though the park is located in the Indian soil, its officials have been stretching their authority in Nepali soil, the shepherds claimed.

“In lack of army or border security personnel on our side, the Indian officials have been forcing their authority even across the border. We were not taking our yaks to their land, yet they created problems and did not allow us to graze our yaks in our own country,” said Rai.

There is a Surakshya Seema Bal (SSB) post near the national park deployed for monitoring and guarding the Indian monitor. However, on Nepal’s side, there is no presence of security forces.

“We used to inspect the border and check for the border pillars since our childhood. But this year, we were not allowed to even go near it,” said Rai. “It seems that our government does not understand the implications of not having our security forces on the border to safeguard it.”

The nearest post of Nepal police from the border is located in the Prangbung market area. It is a day’s walk from Chatare. Vehicles take half the time due to the rough road. However, the police post does not have a vehicle either. Similarly, there is no presence of forest office or any other government office near the border.

“Since there is no vehicle with the police, they cannot reach at Chatare in case of emergencies. Lack of forest office near the border has also made it difficult to monitor poaching and other illegal activities in the area. The government is not serious,” Rai lamented. Around 45-kilometer borderline from Chatare remains unmonitored and unguarded. This leaves Nepal’s wildlife and resources quite vulnerable to infiltrators, Rai said.

“We see their jeeps and cars moving around our side very often. They drive here without any hesitation as if it is their own land,” said Rai. “But in our own land, we don’t see any presence of our security vehicles.”

Another shepherd Chandra Lal Nepal stated that the lack of monitoring by our security forces is costing Nepal a huge portion of our land. The border pillars can be moved and they can encroach our land, after all, there is no one there to monitor it. Even if we say that it has been encroached, who is going to believe us and who is going to act to regain it, asked Nepal. “In West Bengal, India has built Singhalila National Park and in Sikkim they have setup the Kanchanjangha National Park. By forming national parks in the border region, it is protecting its wildlife and herbs very carefully,” said Nepal. “But what about conserving our wildlife and herbs? We have left our resources open for exploitation.” Falelung and Yangwarak Rural Municipalities, among others, share the border with India. However, there are neither security posts nor any signboards to indicate this. According to locals, even foreigners cross Nepal easily without a visa in lack of signboards and barriers.

District CDO, Prakash Chandra Adhikari meanwhile claimed that inspection is done at the border sides from time to time. He, however, admitted the lack of presence of security personals in border areas.

DSP Santosh Singh of the Armed Police Force, said that talks of establishing an APF base camp along the border have been in discussion. “Even land was surveyed for establishing the base camp. But so far this has not progressed well,” he said.

Meanwhile, Rai said that Indians not only ‘enjoy’ roaming in Nepali soil but their security forces even interrogate Nepalis in ‘our own soil’ at times. “They harass us citing this or that reason,” he said. “But on the other hand, our security forces are nowhere to be seen.”

Possibility of strong winds and lightning throughout the country today