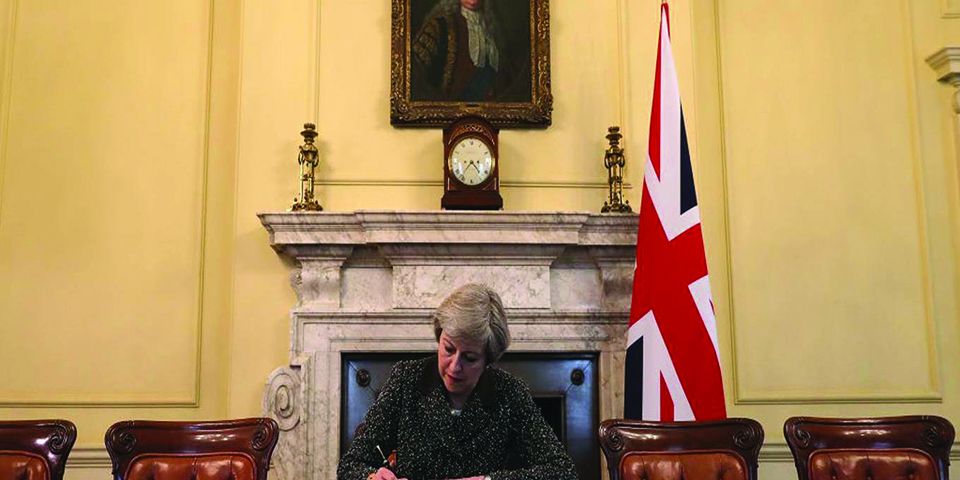 DUBLIN – The March 29, 2019, deadline for the United Kingdom to leave the European Union is fast approaching, yet it remains far from clear how the departure is actually going to play out. Decision time will soon be unavoidable. This means that after two and a half years of drift and fulmination, it is time for those on all sides of the Brexit debate in the UK to start being honest.

Though UK Prime Minister Theresa May has struck a deal with the EU, the chances that it will gain parliamentary approval by January 14—the deadline she has set—seem vanishingly slim, despite the extra month May gave herself to try to improve the odds. Instead, the UK increasingly seems to be opting for a choice between two extremes, each of which would likely involve another referendum.

The first alternative—favored by a growing number of MPs from the ruling Conservative Party, though not yet officially by the Labour opposition—is to hold a second referendum on Brexit. The idea is that, having witnessed the political shambles and shenanigans since the June 2016 referendum produced a narrow victory (51.9 percent to 48.1 percent) for the “Leave” side, UK voters may decide that they do not want to go through with Brexit at all. But be that as it may, the wider idea is that if Parliament is deadlocked, the people must be asked again.

The second, even more extreme option—favored by some Conservative Party fundamentalists, including former Foreign Secretary Boris Johnson—is a “no deal” Brexit, in which the UK would leave the EU with only minimal legal arrangements in place to manage future relations. This, they argue, would give the UK space to adopt the kind of free-market, deregulatory agenda they favor, and to negotiate new trade deals with the likes of the United States, Japan, and China.

Some sort of time extension may still emerge to give the UK—or, rather, British politicians—more room to make its choice. But whether or not the clock is stopped (in the EU’s time-honored way), it seems likely that one of these extremes will ultimately be selected.

For those (including me) who advocate a new referendum in the hope of reversing Brexit, honesty means recognizing that—just like the first time around—a vote to “Remain” is far from a sure thing. Recent opinion polls suggest that, if asked to choose between staying in the EU and leaving under the sort of halfway-house deal May has negotiated, a clear majority of voters would favor staying.

But those polls reflect the current political chaos, with the “Leave” side bitterly divided. That could change, especially if May’s deal is definitively rejected, and the Brexiteers manage to unite around an alternative plan.

The need for honesty is even stronger on the pro-Brexit side, and it, too, involves a referendum that could be lost. Brexit hardliners are going to have to acknowledge that their preferred actions could result in the breakup of the UK, with Northern Ireland choosing in a referendum to join the Republic of Ireland.

The Brexiteers’ biggest objection to May’s deal is that it includes a guarantee, known as the “backstop,” that the UK will essentially do whatever it takes to ensure that physical border checks are not reintroduced on the 300-mile-long land border between Northern Ireland and the Republic of Ireland. For this to work in practice, post-Brexit Britain would have to keep its regulations for goods and agricultural products, not to mention its trade tariffs, closely aligned with those of the EU. And yet for hardline Brexiteers, the real prize of Brexit is the restoration of the UK’s authority to set its own rules.

Since the 2016 referendum, the debate about the Irish border has been deterred, delayed, and distorted by a series of fantasies, such as finding a technological solution that keeps the border relatively frictionless, or having the EU and the UK somehow act as each other’s customs agents. But minimizing border checks is not enough. Northern Ireland escaped a three-decade-long civil war in 1998, after more than 3,000 deaths. To uphold a still-fragile peace, there must be no border at all. It is a stiff test, which none of the supposed solutions has passed.

If hardline Brexiteers aren’t willing to do what it takes to maintain a frictionless border with the EU in Ireland, they need to acknowledge the likely consequences. Northern Ireland will then want to choose, in a referendum, whether to remain in the UK or to unify with the Republic of Ireland, an EU member.

Such a step would be allowed under the 1998 Good Friday Agreement, which ended the civil war and included a promise from the UK, Ireland, and the EU to keep regulations aligned across Ireland. Indeed, that deal leaves open the possibility of a reunified Ireland, if majorities in both Northern Ireland and the Republic of Ireland decide, by referendum, that that is what they want.

In 2016, Northern Ireland voted by a clear margin of 56 percent-44 percent to remain in the EU. Though the minority Conservative government is being propped up by the ten MPs representing Northern Ireland’s pro-Brexit Democratic Unionist Party, an even larger majority of Northern Irish voters would probably choose the EU today.

An honest Brexiteer should therefore admit that leaving the EU on their terms may well lead to the dissolution of the UK. Irish reunification would almost certainly make another independence referendum in Scotland irresistible, though it is impossible to know which way it would go.

Last June, when asked about business leaders’ fears over Brexit, Johnson infamously declared, “Fuck business.” If he were honest, he would apply the same crude dismissiveness to Northern Ireland and Scotland. At least then it would be clear where the Brexiteers actually stand.

Bill Emmott, a former editor in chief of The Economist, is the author of The Fate of the West