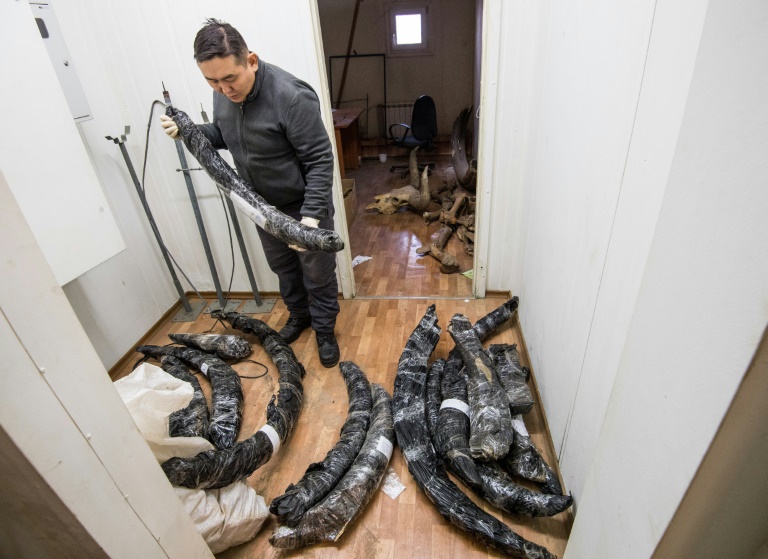 Valery Plotnikov, a palaeontologist at the Yakutia Academy of Sciences, stands among mammoth tusks confiscated from collectors who operate illegally . Photo Courtesy: AFP/RSS

Crouching near a wooden shed in his snowy backyard, Prokopy Nogovitsyn lifts up a grey tarpaulin and takes out a vertebra the size of a saucer: part of a mammoth skeleton.

"Some friends found this in the north and wanted to sell it," says Nogovitsyn, who lives in a village in the northern Siberian region of Yakutia. "But it lacks tusks, so nobody wanted it."

Mammoth bones are widespread in Yakutia, an enormous region bordering the Arctic Ocean covered by permafrost, which acts as a giant freezer for prehistoric fauna.

But over the last few years this part of the world has experienced something of a mammoth rush: after China banned the import and sale of elephant ivory, its traditional carvers turned to the tusks of the elephants' long-extinct ancestors.

Russian exports amounted to 72 tonnes in 2017, with over 80 percent going to China.

Some Chinese buyers come to Yakutia to buy tusks directly, while some Russians also export them.

Thousands of woolly mammoths roamed the Pleistocene-era steppe tens of thousands of years ago and their remains are preserved in Yakutia's permafrost.

Local hunters and fishermen have long picked up mammoth bones along river banks and sea coasts but prices dramatically increased over the last decade, leading fortune-seekers on arduous Arctic quests.

The new industry has created a new source of revenue and led to an increase in paleontological discoveries.

While tusk hunters can obtain licences, the trade is still not fully regulated and some complain of pressure from the authorities and confiscation of their finds.

Collecting tusks is a complicated affair prepared months in advance. Equipment has to be shipped hundreds of kilometres (miles) to the north.

Good-quality mammoth ivory can sell in China for over $1,000 (877 euros) per kilogram and locals see it as the only way to achieve financial security in northern Yakutia, where jobs are scarce and the climate makes agriculture impossible.

"There is a mammoth rush now," said one collector, who has worked with a licence for over a decade but requested anonymity due to the industry's current vague status.

A bill to fully regulate prospecting and the trade in tusks was introduced in the Russian parliament in 2013 but inexplicably has still not been voted on, he complained.

"Ordinary people should know that they can pick something up off the ground, sell it, pay a tax, and live in peace," he said.

Last year, collectors staged a protest in the region's main city of Yakutsk, accusing authorities of confiscating their ivory haul even though they had the necessary permits.

They held up placards saying: "Return tusks back to the people!"

"The situation is at a dead-end" as long as Yakutia can't persuade Moscow to pass the proposed bill, says regional lawmaker Vladimir Prokopyev.

He argued that while digging up the permafrost is harmful, 90 percent of collectors simply pick up tusks from the ground and Yakutia's proposed bill forbids the damaging use of water jets.

Collectors are especially worried after a recent documentary on state television painted them as millionaire poachers.

Prokopyev alleged the film was "ordered by (Russian) mammoth oligarchs who used to be monopolists" in buying up tusks from locals and reselling them to China, but have now lost out to Chinese dealers who come to buy them direct.

But Valery Plotnikov, a paleontologist at the Yakutia Academy of Sciences, said that the mammoth rush had been beneficial to science by providing specimens that the academy could not otherwise afford.

He was studying a rare prehistoric cave lion cub that a collector found last summer.

"We have a symbiosis with licensed collectors," he said, adding that they provide researchers with valuable items for free but remain owners of specimens and stand to profit when their finds are exhibited abroad.

He also receives tusks confiscated from collectors who operate illegally, without a licence or in protected areas.

Those who have a licence and pay a customs levy should be able to export, he said.

Yakutia governor Aisen Nikolayev said he hoped the bill regulating tusk collectors would be finally passed in 2019, though he acknowledged "there is some resistance" to it.

Without a national law classifying mammoth ivory as a special natural resource, the trade remains in a "grey zone," he said.

For some in Yakutia, however, it's a source of pride that the region helps stop the hunting of elephants for tusks.

"Our dead bones are saving living elephants," said Nogovitsyn. "Being able to gather them is important both for us and for Africa."

Infographics: China's journey to the dark side of the moon

The first spacecraft of the Chinese Lunar Exploration Program launched on 24 October 2007, resulting in the unmanned Chang'e 1... Read More...