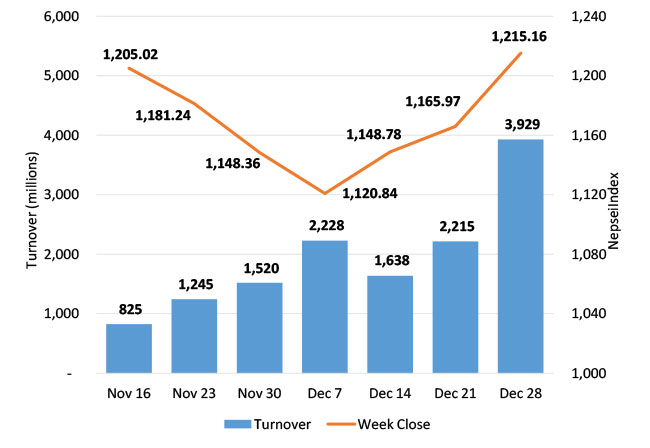 KATHMANDU: Trading began on a highly positive note this week as the Nepal Stock Exchange (Nepse) index shot up more than 32 points on Sunday, posting its biggest daily gain in 5 months.

The index pulled back on Monday and Tuesday with modest losses of over 6 percent and 5 percent, respectively. Nonetheless, the bourse turned in another rally of over 30 points on Wednesday, while the index remained essentially flat on Thursday, last trading day of the week. Eventually, the index closed significantly higher posting a weekly gain of 49.19 points or 4.22 percent.

Investors appeared upbeat throughout the review period as Nepal Rastra Bank made amendments to Unified Directive, 2075 which is supposed to contribute in reviving the situation of the overall capital market. Further, the overall trading scenario also remained uplifted by the Nepal Bankers' Association's decision to curb the interest rates on deposits in the past week. Hence, following three straight weeks of advances, the bourse has erased all its losses from past 5 weeks. Turnover also witnessed a marked improvement. The exchange registered a turnover of almost Rs 4 billion on weekly basis compared to Rs 2.21 billion in the preceding week.

Sensitive index, reflecting the performance of Class 'A' stocks, moved in tandem with the broader market. The index closed 4.27 percent higher.

On the sectoral front, life insurance stocks outperformed the Nepse index by a notable margin. The group's sub-index rallied 16.65 percent on the back of gains coming from sector leader Nepal Life Insurance Company Ltd. Its share price rallied over 20 percent in the review period.

Similarly, Non-Life Insurance sub-index also closed the week significantly higher and posted a gain of almost 9 percent. Furthermore, sub-indices of Microfinance and 'Others' segments also surged over 6 percent in the week.

Meanwhile, heavyweight banking sub-index underperformed but managed to post a decent gain of over 2 percent. Besides, all other sub-indices closed in the green barring Trading sub-index.

On the corporate front, Lumbini Bikas Bank Ltd announced 17.35 percent stock dividend to its shareholders, while Hydroelectricity Investment and Development Company Ltd declared 10 percent bonus shares. Both the companies are due to approve their dividends from their respective Annual General Meetings (AGMs).

Weekly Relative Strength Index (RSI) is tilted upwards and Moving Average Convergence Divergence (MACD) is on the verge of forming a golden cross making further upward movement likely. However, a slight correction can be expected in the following week.

KATHMANDU: The Nepal Stock Exchange (Nepse) started on a positive note and traded higher in the early trading on Thursday.... Read More...