England reaches round of 16 after 0-0 draw with Slovakia 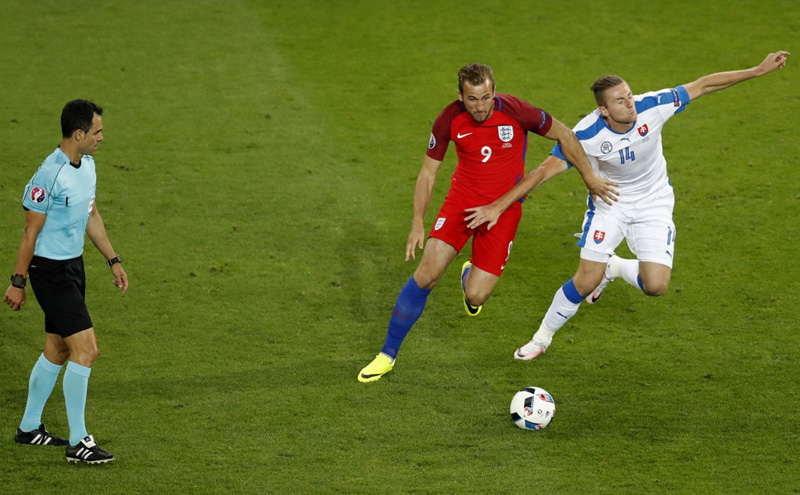 England's Harry Kane fights for the ball against Slovakia's Milan Skriniar next to Referee Carlos Velasco during the Euro 2016 Group B soccer match between Slovakia and England at the Geoffroy Guichard stadium in Saint-Etienne, France, Monday, June 20, 20

SAINT-ETIENNE, France, june 21: A gamble by coach Roy Hodgson failed to pay off on Monday as his reshuffled England side drew 0-0 with Slovakia and failed to top its group at the European Championship.

England still qualified for the knockout stages. But the result at the Stade Geoffroy Guichard meant England was leapfrogged at the top of Group B by Wales, which could now face an easier opponent after Gareth Bale helped his team beat Russia 3-0.

Hodgson made six changes from the 2-1 victory over Wales and left captain Wayne Rooney on the bench. Although they failed to break the stalemate, his players kept the pressure up throughout the game and managed 30 shots while Slovakia rarely played in England's final third.

"Finishing second is a disappointment," Hodgson said after his team finished the group stage with a win and two draws.

"But we are still in the last 16 and who is to say the team we will play will be that much stronger? You just don't know. The way we are playing, I am not frightened of anybody."

England created chances but failed to turn them into goals against a very defensive Slovakia side that can still advance as one of the four best third-place teams. Slovakia has four points, with England on five and Wales with six. Russia returns home with one point.

Slovakia had never kept a clean sheet in six previous games at a major tournament and had lost its three previous matches against England.

"It was disappointing for us tonight. In the three games, we have had the majority of the possession and today we have dominated play from start to finish and we couldn't unlock the door," England defender Gary Cahill said.

England needed a win to be sure of topping its group and avoiding a potentially dangerous opponent in the last 16. Instead, it will meet Group F's runner-up, with a game against Cristiano Ronaldo's Portugal now a possibility.

Following good performances in a 2-1 win over Wales, Hodgson started with Jamie Vardy and Daniel Sturridge up front, with defender Cahill getting the captain's armband.

Wilshere and Lallana looked to have proved Hodgson right with a bright start to the game.

England first went close in the ninth minute after a scramble in the box when Sturridge could not make the most of Vardy's clever flicked header and saw his shot blocked by right back Peter Pekarik.

After Lallana sent a shot wide from the edge of the area, Henderson had an angled effort charged down by left-back Tomas Hubocan.

Slovakia's defenders kept their team in the game, while goalkeeper Matus Kozacik made some decisive saves. He first denied Vardy when the Leicester striker was superbly played through by Henderson in the 17th minute, and then blocked Lallana's fine shot in the 33rd.

The pressure continued after the break as chants of "Rooney, Rooney" by the England fans resonated around the stadium.

But England was nearly caught out when Chris Smalling failed to control the ball properly with his chest as he made an attempted back-pass, forcing keeper Joe Hart to scramble to the ball to thwart the danger.

At the other end, Kozacik made another big save to block an angled shot from Clyne on the break, and England fans finally got what they wanted when Rooney came in for Wilshere in the 56th minute.

Hodgson then replaced Lallana with Dele Alli, who had an immediate impact but saw his goal-bound volley cleared off the line by Liverpool and Slovakia defender Martin Skrtel.

England continued to push in vain until the end. Sturridge made way for Harry Kane in the final 15 minutes but the siege of Slovakia's area remained ineffective.

"We knew that England had already secured their qualification and probably would not attack that much, but obviously they have good attacking qualities, they wanted to win," Kozacik said. "We needed at least one point, we managed to do that and hopefully we can go through."

MELBOURNE, Australia, Jan 21: Serena Williams made the net seem much higher and the court much smaller for Nicole Gibbs, a... Read More...

LILLE, June 26: Germany coach Joachim Loew is confident his side will be "better than England" when it plays Slovakia... Read More...