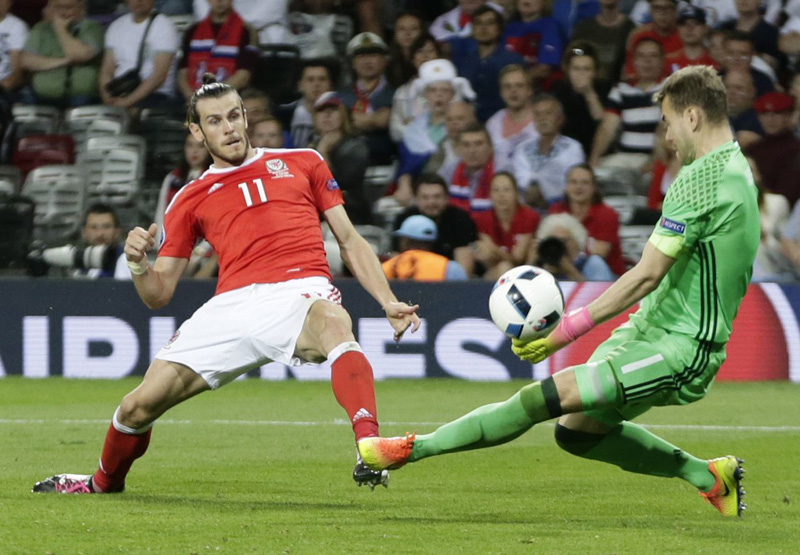 TOULOUSE, France, June 21: Gareth Bale made it three goals in three games as Wales overwhelmed Russia 3-0 on Monday to reach the knockout stages of the European Championship for the first time.

Playing in its first major tournament since the 1958 World Cup, Wales defied expectations to win Group B ahead of England and send Russia home with an impressive counterattacking display that rested on more than just the talents of Bale.

"I've never seen a better performance from any Wales team than I saw tonight," Wales coach Chris Coleman said. "As a nation geographically we are small but if you judge us by passion you could say we were a continent tonight."

Because England could only draw 0-0 with Slovakia, the result meant that Wales topped the group with six points, one more than England, which also qualifies for the round of 16. Slovakia, which ended with four points, has a good chance to progress too as one of the best third-place teams.

For Russia, defeat meant its time at Euro 2016 is over and coach Leonid Slutsky gave a major hint that he won't be the man in charge for much longer. The team, which only earned one point in a disappointing campaign, will now focus on the World Cup, which it is hosting in two years.

"I think after a type of tournament like this, you need someone else to take charge of the national side for major competitions," Slutsky said via a translator.

Russia, which needed to win the match to have any chance of progressing, took a more attacking posture at the Stadium de Toulouse. But its attacking forays left space for Wales to strike on the counterattack. And counterattack it did, with all its goals coming from crisp movement and deft passing.

Wales went ahead as soon as the 11th minute when Aaron Ramsey beat the offside trap and deftly chipped the ball over the advancing goalkeeper Igor Akinfeev.

Neil Taylor doubled the score nine minutes later after another swift move that owed much to the dribbling skills of the team's star player, Bale. With the Russia defenders focusing so much on the Real Madrid player, Taylor had the time and presence to slot in a rebound after his first effort was blocked by Akinfeev.

Bale, who last month won the Champions League with Real Madrid for the second time in three years, made it 3-0 in the 67th minute with a deft finish from a Ramsey pass. He is now the tournament's top scorer with three goals.

"It's probably the best performance I've been involved in with Wales," Bale said. "To top the group, what more can you ask? We said we didn't want to make the numbers up. Well, we can't do any more than win the group."

Welsh supporters sang with passion throughout the game, notably their national anthem, and turned the Stadium de Toulouse a sea of red.

They chanted "Don't take us home! Please don't take us home!" during the match. As the match progressed that soon morphed into "We are top of the league" and they can now look forward to further adventures ahead. Next up will be a team that finished its group in third-place, so further progress is potentially on the cards.

"Now that we're through we want to see how far we can go," Ramsey said. "Anything can happen in the next matches."