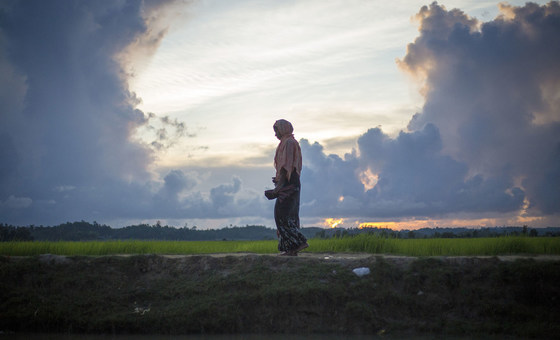 Beset by millions of bamboo-chomping beetles, almost every shelter in the vast Rohingya refugee camps of Cox’s Bazar, in Bangladesh, needs replacing. With just over four months to go until the beginning of the monsoon season, the race is on for IOM, the United Nations migration agency which is managing the camp, to provide families living in the worst-affected temporary dwellings, with new and more durable bamboo.

Home to close to one million people, or 270,000 families, the camps of Cox’s Bazar make up the world’s biggest refugee settlement; a rapidly-built city of bamboo and tarpaulins on the hills of a forested nature reserve. The camps sprang up in late 2017 after violence in Myanmar drove hundreds of thousands of people across the border into Bangladesh, in just a few weeks.

To help meet the challenge of the beetle infestation, IOM has decided to build a bamboo treatment plant in the south of Cox’s Bazar, with the capacity to treat around 40,000 bamboo sticks per month, sufficient to upgrade up to 7,000 emergency shelters.

“This is a major project, and one which will help ensure that the refugees do not have to live with the constant threat their shelters will collapse due to damaged bamboo,” said Manuel Pereira, IOM’s Emergency Coordinator in Cox’s Bazar, in a press release.

Bamboo is used for shelters, medical facilities, bridges, steps and handrails in the camp because it is cost-effective and grows naturally in Bangladesh. However, due to the need to scale up the response rapidly as more and more families kept pouring in, organisations were forced to rely on young bamboo that is more susceptible to attack by insects, including the boring beetle in this case.

“Even with the untreated bamboo IOM used, we would normally have expected the material to last between one to three years. But the infestation is so large and spread so quickly that within six months major damage had already taken place,” said Yoga Sofyar, a bamboo expert who has been working with IOM.

According to Sofyar, bamboo is a traditional construction material in Bangladesh, but its popularity has declined in recent years and there was not sufficient, high quality treated bamboo available when the refugee crisis began.

After deciding that building a plant was the only scalable and reliable solution, IOM chose to use boron for the treatment, a mineral found in food and natural sources that has a minimal environmental impact. In addition, plant residue from the treatment process can be used as a fertilizer by nearby farms.

“The treatment extends the bamboo’s durability from months to many years. If shelters are taken down or moved, the treated bamboo can be reclaimed and reused for other purposes, according to Yoga Sofyar.

The set-up cost of the bamboo treatment centre is US$500,000, and its operational costs for the first year - allowing 100,000 families to upgrade the six core structural poles in their shelter - are estimated at $2 million. Thanks to funding from the United Kingdom, the United States of America and Sweden, the first four treatment tanks in the facility are already operational, and expansion work is underway.

“Once it is completed, this will be one of the largest bamboo treatment plants ever installed in an emergency response and we will share the knowledge and experience we have gained here with our partners in Bangladesh and other organisations around the world,” noted Sofyar.