Govt yet to fill the void of ‘janabadi’ education 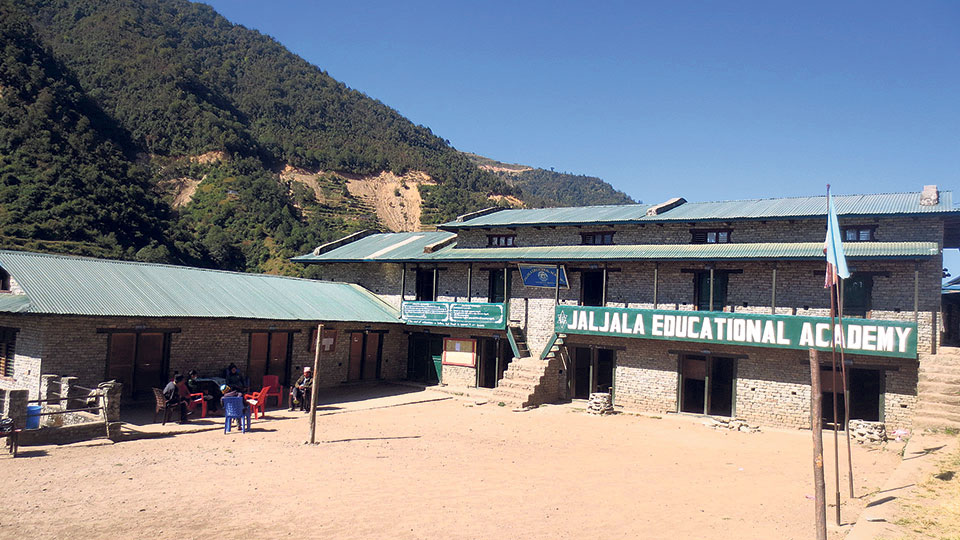 Jaljala Educational Academy of Rolpa has stopped teaching the revolutionary ‘janabadi’ education but is yet to adopt modern education system.

ROLPA, Dec 22: A for army, B for bomb and C for communist. This was how students used to be taught in Rolpa schools during the conflict days. The Regional Public Education Department established by the then rebels had introduced the people-oriented education (janabadi education) and the curriculum was targeted for students from fourth to 10th grades. Most of the schools in the district and even beyond the border would follow the guideline. Whatever was taught then has now been confined to history.

Students from grade one to six used to be taught politics, history, economics, culture and army science and technology.

In standard four, the children were introduced to the two segments of the society - the oppressor and the oppressed. In politics, they were taught about the life of Maoist leader ‘Prachanda’, the beginning of the people’s war, formation of the people’s government, its works, duties and rights and even about the first attack in Dang, among other topics.

For higher classes, there used to be classes in more details regarding communism, socialism, capitalism, colonialism and so on. The development of ‘Prachanapath’ was one of the main topics. Similarly, there were several chapters on the types of weapons, formation of army, war methodologies. Defense, attack and importance of war were explained in some books. The curriculum was designed to serve the purpose of war.
However, with the Maoists signing the comprehensive peace agreement and joining competitive politics, all those activities came to an end.

The locals heaved a sigh of relief at the end of the war. But, they feel that modern education still eludes them while the ‘old one’ also disappeared with time.

“The janabadi education was a window to understand the world better, but that has become a thing of the past. But no better education replaced it,” said a former combatant. “There are some boarding schools, but they are not affordable for the poor class,” he added.

The education provide by the Maoists was provocative, say the locals. The children were greatly impressed and inspired. The Maoists initially brought children to such schools by force, but the children surprisingly continued attending the classes as the tender minds got influenced by the revolutionary system of education. However, the scenario is not the same now.

“Children stay out of schools not just due to poverty, but also due to the lack of interest. Unlike the passionate teaching in those days, teachings are now formal. And formal lectures do not interest the students,” said the combatant.

Having said this, he however did not support what the Maoist leadership did back then. “Had they been able to make feel the change they had promised, maybe the war would be a little justified,” he said. “Or else, the war chapters will be looked upon as something nonsense in the history.”

After the Maoists joined peaceful politics, children started joining private schools and even community schools were following general courses. With this, the job of the teachers of ‘Janabadi Schools’ also came to an end. Interestingly, some of them opened their own schools.

“Those who were against private schools later opened their own schools. They became principals and owners of private schools,” the combatant reported. “What would they do? Their role as teachers of ‘janabadi school’ was needed no more.”

Girish Pun has his share in Jaljala Educational Academy. He was the headmaster at Shahid Smriti Namuna Vidhyalaya in Thabang.

“Earlier, we would teach children of rebels as well as the villagers. But later, there was no situation of running that kind of school,” Pun said. “Back then, we were living on a knife’s edge. Anything could happen anytime. But things are different now.”

Now, he feels a little odd while operating a private school, he says. But ‘life does not run if you try to be too idealistic’.

“I do not feel good when I compare my past and my present. But you have to move on with time,” he said.

Meanwhile, a private school teacher Madan Poudel stated that he has not been able to come to terms with the present day reality due to the shock of the war. Helicopters hovering around the sky still brings chills down his spine remembering the days when the army used to fire shells at schools from the air.

“Even today, I feel nervous at times. When I hear the sound of helicopter, I get nervous. We saw very bloody war then, and the memories do not stop haunting me,” Poudel said.
Poudel used to teach at a ‘janabadi school’ in Libang back then.

How the government is failing education

The students who have been deprived of learning will look back to this time to recall how the government failed... Read More...

KATHMANDU, Sept 6: The government is marking the 37th National Education Day on coming Thursday or Bhadra 23 in the... Read More...

Pregnant woman rescued by helicopter in Doti
53 minutes ago