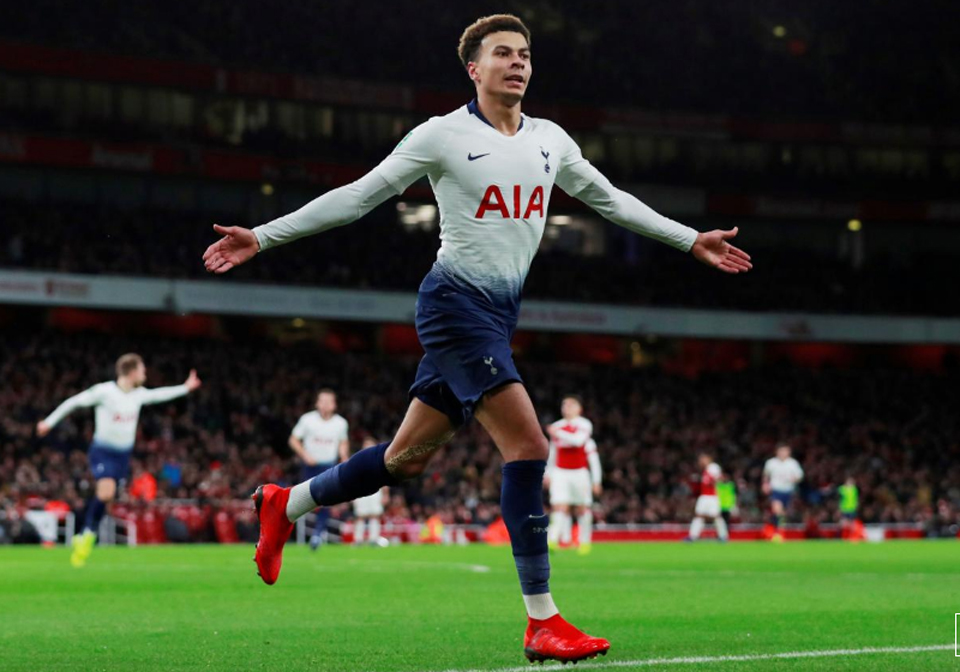 LONDON, Dec 20: Tottenham Hotspur gained sweet revenge over north London rivals Arsenal as goals in each half by Son Heung-min and Dele Alli earned them a 2-0 win on Wednesday and a League Cup semi-final place.

Seventeen days after losing 4-2 in a pulsating Premier League clash, in-form Tottenham returned to the Emirates to claim a first away victory over Arsenal in eight years and set up a two-legged semi against Chelsea.

Son opened the scoring against the run of play with a stylish 24th-minute effort from Alli’s pass and Alli doubled Tottenham’s lead with a delightful dinked finish on the hour.

Shortly afterwards Alli appeared to be struck by a plastic bottle thrown from the Arsenal fans but it did not dampen Tottenham’s night as they took a step towards a first trophy under Manchester United target Mauricio Pochettino.

“It’s a big derby, last time we were here we didn’t have a great result and this is a special night,” Son said.

Arsenal had gone 22 matches unbeaten in all competitions under new manager Unai Emery until Sunday’s league defeat at Southampton and a second loss in four days was a bitter pill to swallow.

The hosts played well in patches but were guilty of wasting several chances, especially before the break.

Tottenham keeper Paulo Gazzaniga, in for rested Hugo Lloris, was also inspired when he needed to be, clawing an Aaron Ramsey volley on to the post just before halftime.

The Argentine was first Spurs goalkeeper to keep a clean sheet away at Arsenal in any competition since November, 1998.

Arsenal started brightly and Henrikh Mkhitaryan glanced a header across the face of goal before Ramsey flashed a shot wide. Mkhitaryan then wasted a gilt-edged opportunity when clean through on goal, shooting too close to Gazzaniga.

Tottenham took the lead in the 24th minute when a long punt forward was flicked on to Alli, who showed great vision to set Son racing clear and the South Korean calmly curled past Cech.

Moussa Sissoko should have extended Tottenham’s lead but fired wastefully over and it was Arsenal who ended the half strong with Ramsey’s volley forcing heroics from Gazzaniga.

Arsenal introduced French striker Alexandre Lacazette just before the hour mark but it was Harry Kane, who came off the bench at the same time for Spurs, who made an immediate impact.

Kane chested down a high ball and his lofted pass released Alli. His first touch was sublime and his second lifted the ball over the advancing Cech to double Tottenham’s lead.

Tottenham are hunting their first silverware since 2008 when they beat Chelsea in the League Cup final while they lost to the Blues in the 2015 final in Pochettino’s first season in charge.

“We shall see, Chelsea are a great team but we are excited. To be in the semi-final is fantastic for us.”