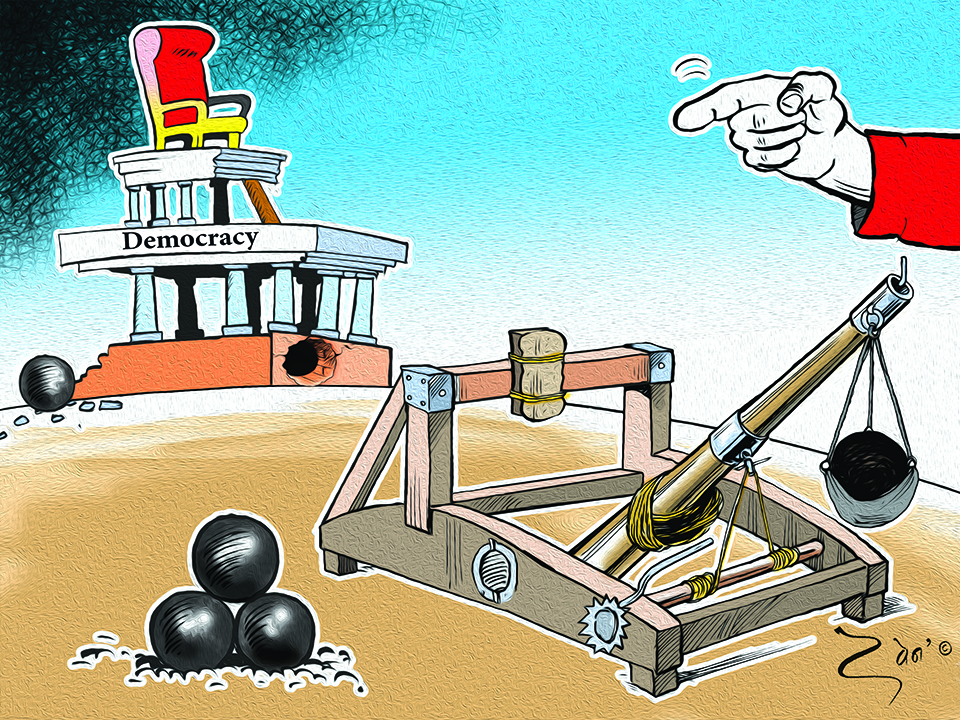 If the stalwarts of Nepali democracy are not vigilant, authoritarian forces will likely suspend our democracy once again

During the Cold War, coups d’état accounted for three fourth of democratic breakdowns. Now, in the post-Cold War world era, the trend has only slowed. Broadly speaking, serious threats to democracy have recently surfaced in countries like Turkey, Poland, Egypt, Brazil and Spain to name a few. General public opinion is that democracy might fail in Nepal. If the stalwarts of Nepali democracy are not vigilant, authoritarian forces will likely suspend our democracy once again.

It is highly unlikely that military takeovers will be the reason behind democracy’s death in the 21st century. Violent seizure of power has become rare in the age of social media and smartphones. For example, on July 15, 2016, a section of the Turkish military unsuccessfully tried to overthrow President Erdogan. The news of the attempted coup spread via social media and soon thousands of citizens, armed with kitchen utensils, gathered around to oppose the coup resisting tank fire and air bombardments. The people, with the help of loyalist members of the military and police, defeated the coup attempt in few hours.

It may come as a surprise to many, but elected officials will be the ones responsible for making democracy dysfunctional. Democratic breakdown usually starts at the ballot box because the uneducated and ignorant sections of the society continue to believe they are living in a democracy if they get to vote once every five years. As a result, ill-informed citizens usually end up electing autocrats who then maintain the appearance of democracy while eviscerating its substance. For instance, they do not suspend the constitution like the military generals in the Cold-War era did but make democratic institutions barely functional with political interference.

Furthermore, the government will depict regressive authoritarian measures as efforts to improve democracy. For instance, they will talk about making the judiciary efficient, and combating corruption to hide their real motives. The media on the most part will be bullied into censorship or bought off. By design, third world democracies are not equipped with a mechanism to prevent authoritarians from gaining power in the political parties.  This flaw needs to be fixed if democracy is to be made sustainable.  In a nutshell, any modern society that claims to be democratic should hold free and fair elections, permit freedom of expression, protect human rights, and observe rule of law.  Among the four pillars of democracy, the governments around the world are targeting the freedom of expression the most.

Free speech is the most important liberty.  It also is a universal right which is why it must be defended at all cost. But, then again, who decides what can be said and what cannot be said? Should there be any limit on free speech? Simply put, all speech should be free except the ones that incite imminent violence or harm to others. Free speech is what distinguishes a liberal democracy from a new mutant called electoral authoritarianism.

Many countries that initially curtailed free speech on the Internet by enacting draconian laws have realized their mistakes and were forced to make amendments. For example, the Indian Supreme Court struck down Section 66-A of the Information Technology Act 2000 in 2015. The police in India were using the clause to arrest people for allegedly posting anti-government materials on social media.  The Indian Supreme Court felt the section violated the fundamental right to freedom of speech and expression and therefore declared the clause illegal because Indian constitution provides liberty of thought, expression and belief.

The Economic Intelligence Unit’s Democracy Index published in 2017, a snapshot of the state of democracy worldwide for 165 independent states, also concludes freedom of expression is facing a threat. The report concludes a growing number of governments around the world have played a prominent role in curtailing freedom of expression. Also “Governments, in democratic as well as authoritarian countries, are deploying defamation laws, prevention of terrorism laws, blasphemy and “hate speech” laws to curb freedom of expression and stymie media freedom. Non-state actors, including militant Islamists, criminal gangs and vested interests also pose a growing threat to free speech, using intimidation, threats, violence, and murder,” says the report.

Norway, Iceland, Sweden, New Zealand, and Denmark stand at first, second, third, fourth and fifth positions respectively in this index. Nepal did not do well as expected and ranked at the 94th position just below Liberia.

The characteristics of “hybrid regime” are as follows: Free and fair election is not possible due to prevalent corruption and weak rule of law and civil society. Media is bullied and the judiciary is extremely biased.

In “authoritarian regimes” state political pluralism is absent. Most countries in this category have dictators ruling the population. Few formal institutions of democracy are allowed to exist, but they are made dysfunctional. Elections are rare and if they do occur they are not free and fair. Media are typically state-owned or controlled by groups connected to the ruling regime. Repression of criticism and pervasive censorship is normal.

In a society governed by the rule of law, it becomes imperative that those who govern should be made accountable for breaking the law. One way to do so is to allow people to voice their opinion. If a state bullies or punishes citizens for voicing their concern against the government then it is important to understand, democracy is slowly sliding toward authoritarianism.

Nepal has made significant strides in establishing democracy, but it does not take much time for democracy to go south. The idea of government by the people, of the people, and for the people can only compete effectively with electoral authoritarianism if the country as a whole remains vigilant.  The democrats have to remain vigilant and make sure our right to free speech guaranteed by the constitution, does not get violated by the elected officials.