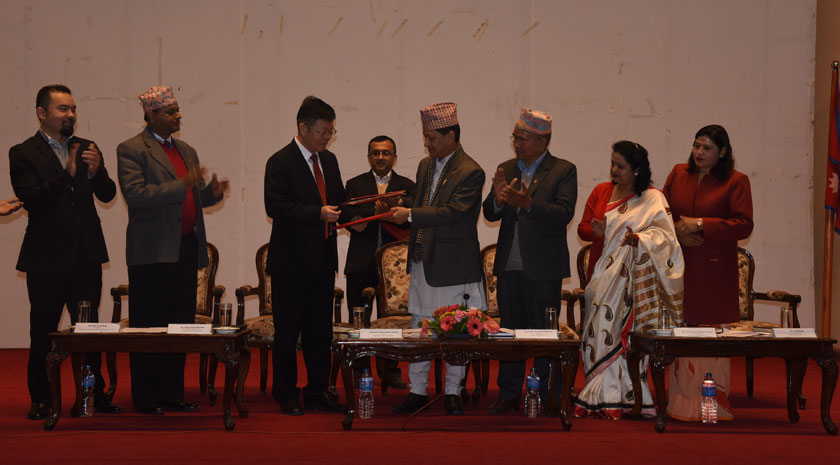 KATHMANDU, Dec 19: An agreement has been signed today with a Chinese company for preparing the Detailed Project Report (DPR) of monorail to be built along the 27.5 kilometers long Ring Road in Kathmandu.

KMC Mayor Shakya asserted that the monorail, which is the common agenda of all political parties in the country, would not cause any financial burden to the State.

Shakya shared that the coordination with the federal and provincial governments was done regarding the monorail construction. He was confident that the operation of monorail would aid in addressing the issues relating to air pollution in Kathmandu.

The Mayor also assured that not a single house of people would be dismantled while building monorail.

The feasibility study of monorail in Kathmandu was first conducted in 2012 but it did not progress further. According to KMC, works relating to monorail were stuck in lack of experts and budget. KMC is now preparing to go for contract bid as agreement for DPR has been made.

Similarly, Zheu expressed his happiness for the agreement of DPR with their Company and assured that the DPR would be prepared on time.

The DPR would contain environment impact assessment, monorail's design, its technical capacity, estimated cost, monitoring of the traffic management, phases of project implementation and profit analysis among others, according to KMC.

A feasibility study was carried out before this for operating monorail. The feasibility study on the economic, technical and sustainability of urban transport management was submitted to KMC on September 13, 2018.

The Company had presented the letter of intent for the feasibility study on May 3, 2018 and an agreement on this was reached on May 25. As per the agreement, the Company was to complete the feasibility study in six months but it accomplished the task within three months and submitted its report. Taking reference to this, Mayor Shakya expressed the conviction that although the term for the preparation of the DPR is of one year, the report would be ready in six months.

The feasibility study shows that monorail could be operated within the second track of the pedestrian way along the expanded Ring Road if the government cooperated in resolving the problem seen in the expansion of the Ring Road from Gaushala to Chabahil. KMC has stated that the DPR is being prepared on this basis.

Lalitpur Metropolitan City mayor Chiri Babu Maharjan said monorail had become a political agenda during the time of election and it has now become a must. So he hoped that works on monorail would be completed on time.

As per the feasibility study report, 10 kilometers of the 27 kilometers long Ring Road lies in Lalitpur metropolitan city. The monorail is to be constructed alongside the Ring Road.
The study shows that monorail could be constructed in three phases based on the assessment of the present situation. The study conclusion is that the monorail could be constructed from Koteshwar to Kalanki in the first phase, from Kalanki to Maharajgunj in the second phase and from Maharajgunj to Koteshwar in the third phase. The estimated cost of the monorail project is Rs 116 billion.

The month since Myanmar's military coup
44 minutes ago