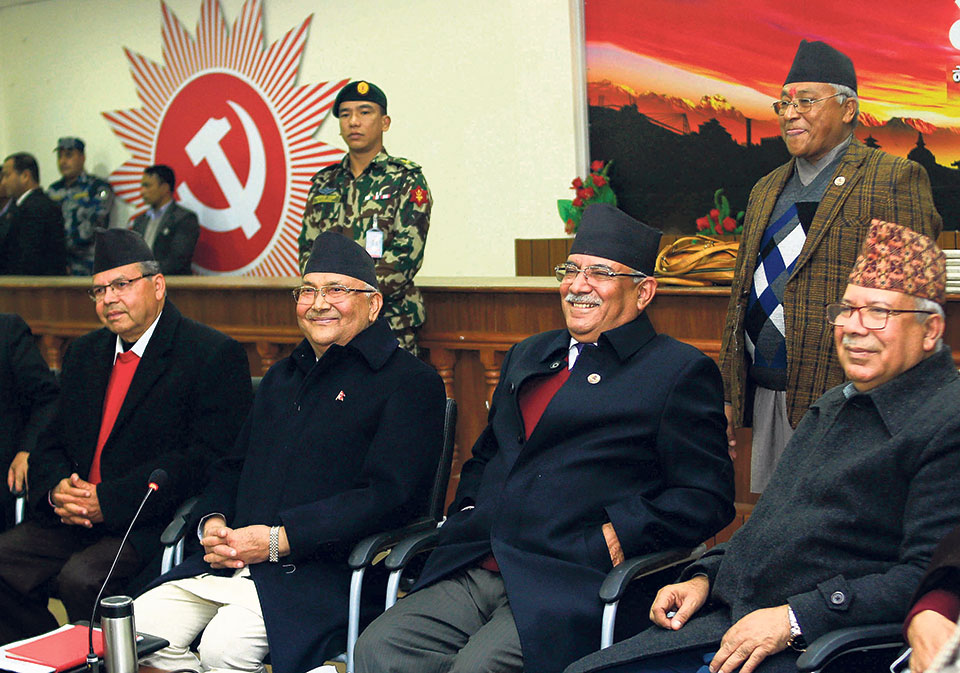 KATMANDU, Dec 16: Ruling Nepal Communist Party (NCP)’s Standing Committee meeting, which started in the capital on Saturday after a gap of months, witnessed a heated debate at the outset after one of the party’s top leaders presented agendas for the meeting.

Shortly after the meeting started, one of the party’s two chiefs, Prime Minister KP Sharma Oli announced that he had three agendas: tribute to martyrs, political report and miscellaneous.

After “setting” the meeting’s agenda Oli urged another chairman Pushpa Kamal Dahal to present their political paper at the meeting.

But “irate leaders, mainly those from anti-Oli camps, had enough.” They rose from their positions one after another and said a party chairman was not the only one responsible for setting a meeting’s agendas. They said the party’s Standing Committee meeting should be let free to fix the meeting’s agendas.

“How can you set the agendas on your own [without discussing]? Should not the meeting itself be let free to set its agendas?” party’s Standing Committee member Ghanshyam Bhusal questioned.

Bhusal complained that the party’s statute was “fake”, claiming that the original version of the document had been revised by the Secretariat. He accused the party leadership of bypassing the Standing Committee members while finalizing the party’s crucial document.

The Secretariat, which includes the top nine leaders in the party, had finalized the statute. As per the statute, the nine-member “elite committee” enjoys the rights to decide political and organizational issues.

The anger of the dissident leaders did not stop there.

Other Standing Committee members Bhim Rawal, Yogesh Bhattarai, Raghu Pant and Beduram Bhusal, among others, also came down heavily on the party chairman for overlooking other leaders while setting the meeting’s agendas and deciding key issues in the past.

With the leaders echoing voices against the party chief Oli, another chairman Dahal came up with an amicable proposal. “If you want to add some agendas? It’s Ok. You can include them later and we can discuss them even if they deserve a separate discussion,” said Dahal, “If you say, the next round of meeting can also set those agendas.”

After Dahal calmed the angered leaders, they allowed the presentation of a 22-page long political paper prepared by the chairmen duo. Backed by the disgruntled leaders Bam Dev Gautam, another senior leader in the party, presented another political report of his own.

The disgruntled leaders want to include some of their agendas - the government’s performance, disputed party statue and party chairman Oli’s ‘monopoly in running the party and government’ - in the meeting’s agendas.

Prime Minister Oli, who is leading a two-thirds majority government and a strong communist party, is criticized for not delivering services to the people up to their expectations. Failure in booking the rapist(s) and murder(s) of Nirmala Panta, a 13-year-old girl in the district of Kanchanpur, has caused a huge “damage” to the government.

The report has presented the introduction of social security scheme, national ID card, promulgation of laws related to fundamental rights, end of transportation cartels and progress in post-earthquake reconstruction as the major achievements of his government in the recent nine months.

The dissident groups in the party, however, are not convinced with “the rosy picture that party chairmen have painted in the political report.”

“After months, they have come up with a progress report and a few agendas. We are well prepared to discuss them as we believe only rigorous discussions will save our party,” said the party’s Standing Committee member Ghanshyam Bhusal, “Otherwise, none can save it from collapsing.”