KATHMANDU, Dec 14: The All Nepal Football Association (ANFA) has unveiled the schedule for the tournaments to be organized in mofasal. The ANFA had earlier formed a standard maintaining committee in the coordination of Vice-President Krishna Bahadur Thapa.
The committee has set criteria for dividing 23 tournaments into two groups in order to systematize all the tournaments. The committee handed over the report to the tournament committee led by Bijay Ghale.
ANFA Spokesperson Kiran Rai said that the tournament schedule was made public by the tournament committee on Thursday.
The ANFA had set criteria for the mofasal Gold Cup tournaments by dividing the tournaments into two divisions in order to make them regular and well managed and asked the standard maintaining committee led by Thapa to submit the reports on that regard.
The ANFA had set the criteria for the ‘first class’ tournaments to have the stadiums or the well equipped standard grounds with permanent or temporary parapet.
Likewise, the football governing body had also ordered to have at least two teams to participate in the tournament including six A Division clubs. It had also asked the committee to prepare required technical manpower, to pay three percent of the proceeds earned from tickets sales to the ANFA and to have the provision of an ambulance in every stadium.
Meanwhile, in the ‘second class’ tournaments, the ANFA ordered the committee to have the stadium or the standard grounds well equipped with a total of eight teams including four A Division clubs to participate in the tournaments.
“The standard maintaining committee led by Krishna Bahadur Thapa has submitted the prepared criteria to systematize the mofasal tournaments to the tournament committee led by Bijay Ghale,’’ Rai said, “The soon to be held ANFA working committee meeting will make the division of the tournaments.’’
Rai added, “The tournaments will be regularly monitored.’’
Experts call it ‘ritualistic’
Despite the fact that the ANFA has unveiled the tournaments schedules and has made a provision of systematizing them, the players won’t get enough rest as the tournaments will be held one after another. It’s not even sure that a tournament will be started before the prior one ends.
The national team players had to play the Gold Cups or even the local tournaments in mofasal as the A Division League was not organized for a long time. The experts have accused the ANFA of prioritizing the ‘ritualistic’ tournaments over the skill development of the players  by organizing them, while the A Division League is also being run.
The mofasal tournaments will immediately be organized after the league ends on January 1.
The first tournament will be the 11th Falgunanda Gold Cup, which will run from January 5 to 11 in Phidim. The mofasal project will end with the fourth Mechinagar Gold Cup, which will end on May 4. 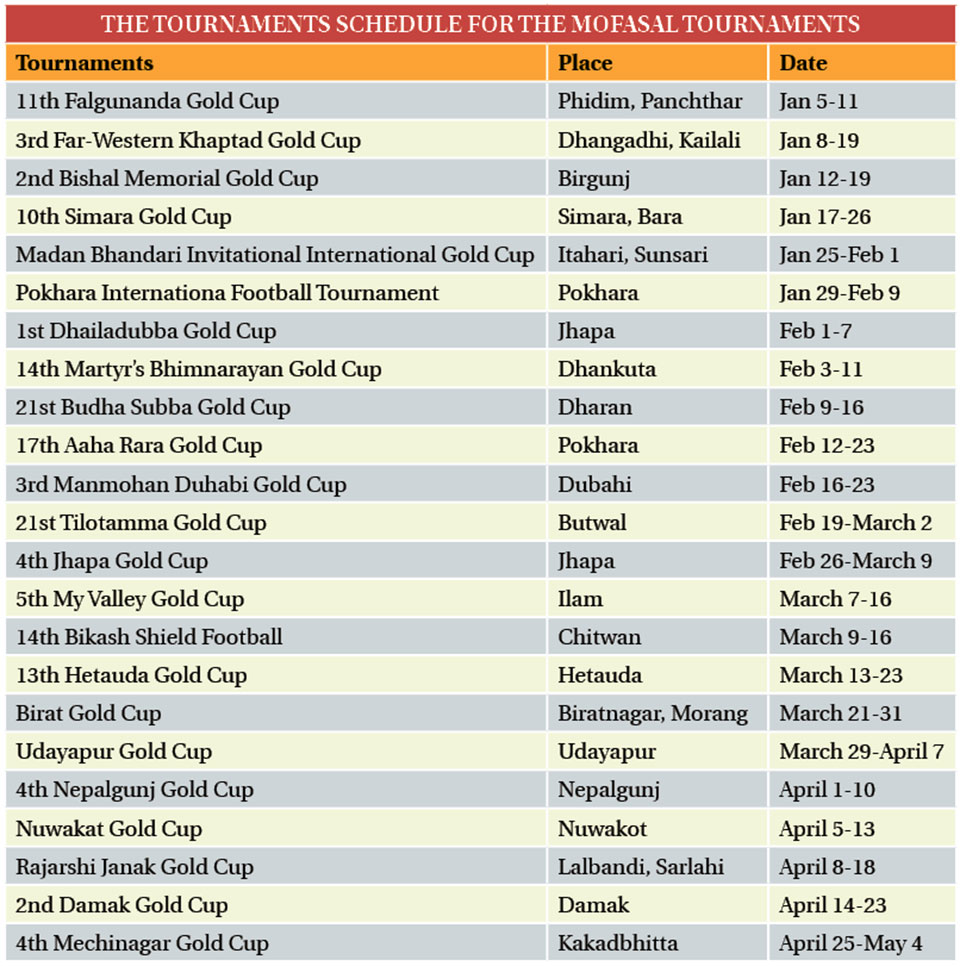