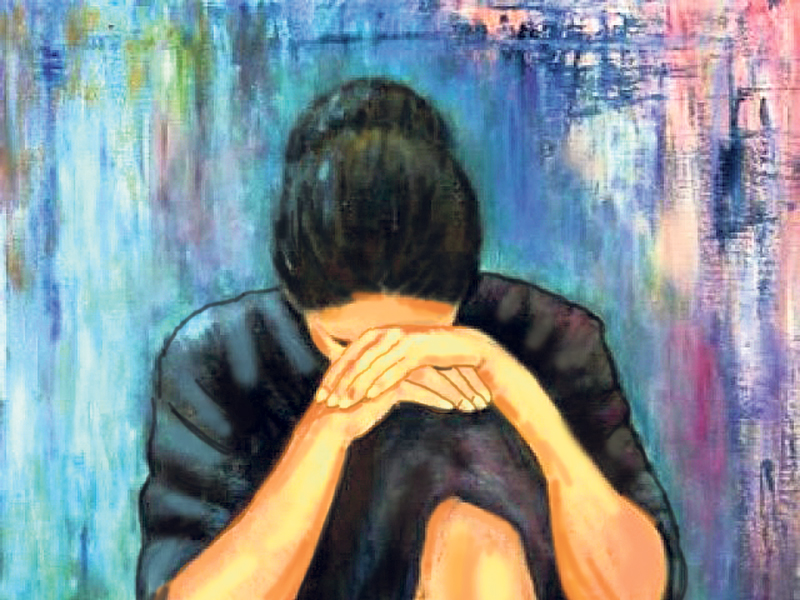 DANG, Sept 12: When women in her village were busy celebrating Teej festival, 17-year-old Goma Oli, a local of Rajpur, wore a gloomy look. There was no celebratory mood in her poverty-stricken family. And being one among the seven sisters made things even more difficult for her.

On the very day of Teej, Goma was given the responsibility to take the goats for grazing in the nearby forest. Poverty and subsequent shortage of basic necessities had been pushing her into gloom mood and depression. With her family unaware of her state of mind, her gloom had take hold of her to such an extent that she committed suicide by jumping off the cliff in the forest that day. Locals recovered her dead body from Nepuwa River the next day after Teej.

“We have established poverty as the reason for her suicide. Being unable to celebrate Teej due to poverty crushed her mentally, prompting her to take her own life,” said Superintendent of Police (SP) Dhiraj Pratap Singh, who is also the chief of District Police Office (DPO), Dang.

In another case, 12-year-old Lok Maya Oli of Tripur Municipality-12 also could not bear the despair brought by poverty. She saw no reason to live for, and wanted to end her life instead of living in poverty. And she eventually committed suicide by hanging on May 27.

“Before committing suicide, Lok Maya had written a suicide note. Her note reveals that poverty was also the main reason that prompted her to take such a harsh decision,” said SP Singh.

Likewise, Niru Roka also chose the path of suicide for the same reason. Increasing prices of goods and being unable to afford even basic commodities contributed in her decision to commit suicide. She hung herself last December, according to the DPO.

All the three cases mentioned above are just representative cases. They all committed suicide due to the same reason: poverty and inflation. In fact, poverty and growing inflation have been the reason for many in the low-income groups to commit suicide, reflected data provided by the DPO.

The trend of suicide has taken a dangerous form in the district. Many people, from small children to very old ones, have committed suicide to end what they phrase as 'misery of living'. According to the data, age group committing suicides include 12-year children to 65-years old senior citizens. The data also revealed that most of them are from underprivileged Dalit community and lower-income group, mostly from the Chaudhary community.

“There has been growing trend of suicide in the district. And our investigation into most of these cases have pointed to inflation and poverty as the major cause,” said SP Singh.

“Most of suicide cases that we have investigated reflect that as poverty deepens, people develop the mentality that dying is a much better option than living in misery. Such mentality fuels the urge to commit suicide,” he added.

Apart from poverty, police said older people commit suicide due to family disputes and rejection from their society. As many as 17 elderly people of Dang had committed suicide in the last fiscal year alone.

“Incidents of old people being forced out of their home are not new in many societies here. Family members force older people of their house or just leave them stranded in roads. Along with that society also does not embrace the views of the old people, isolating them physically and emotionally. Finding themselves stranded, nothing to do and with no one to take care of them, they see suicide as the only solution,” said SP Singh.

Majority of those who commit suicide are women

According to the DPO, majority of those who commit suicide are women. As many as 144 suicide cases were recorded in the district during the fiscal year of 2013/014. Among these 87 were female.

In the last fiscal year, 73 women and eight children had committed suicide. And among them 17 cases of suicide recorded this fiscal year, 11 of them are women.

“Women occupy seventy percent in the total suicide cases recorded in the district. It's not just poor financial condition that has been behind the increasing rate of suicide among women. Domestic violence, lack of empowerment, among many other factors has also contributed to this alarming numbers,” said SP Singh.

Family members force older people of their house or just leave them stranded in roads.

Along with that society also does not embrace the views of the old people, isolating them physically and emotionally.

Finding themselves stranded, nothing to do and with no one to take care of them, they see suicide as the only solution.

KATHMANDU, Sept 12: With an increasing number of pedophilia cases surfacing in Nepal in recent years, officials concerned have pointed to... Read More...

In line with its meteoric economic rise, China has made impressive progress in reducing poverty over the last three decades. Read More...

KATHMANDU, Jan 17: Nepal has 20 to 35 percent working poverty, according to an international report. ... Read More...

Samjhana's rapist and murderer has confessed to the crime: Police
8 hours ago