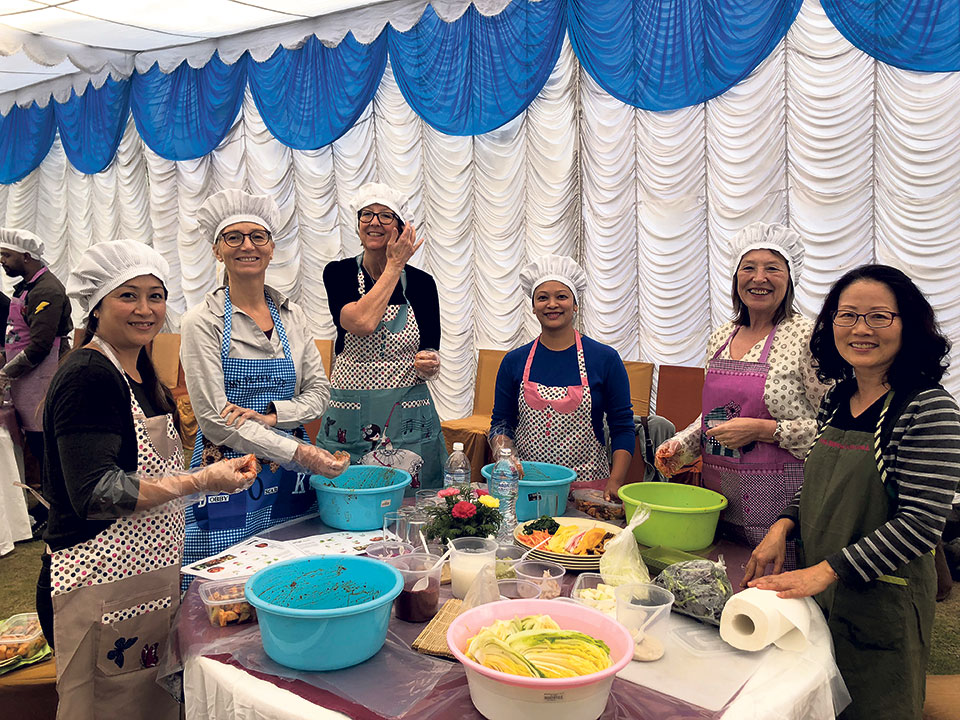 KATHMANDU, Dec 7: K-pop is taking over the world. It has been for quite some time now. But its popularity has also led to a curiosity about the Korean culture. Termed as the “Hallyu Wave”, the Korean culture is gaining a strong foothold in various regions of the world. Furthermore, dramas, travel vlogs, and pop culture have hugely contributed to its rising popularity. And since food is such an integral part of any culture, there’s also an increase in the demand for Korean food. In Nepal too, every store these days seems to stack up Korean instant noodles (known as ramen) and it isn’t long before they need to restock them again.

In light of this growing popularity of Korean food and culture, the Embassy of the Republic of Korea recently hosted a Korean Cooking Class with the cooperation of the Korean Community (Nepal) in the Sunken Garden of Hotel Himalaya in Kupondole. The aim of the event was to promote Korean food and organic ingredients, to shed light on the culinary workings of South Korea, and share original Korean recipes. The program saw the participation of over 45 individuals among whom notable food bloggers (mydarlingfood, foodnomics, nepal.food) and prominent socialites were present too.

In groups of sixes and sevens, clad in aprons and toques, all participants set on to making their own kimchi and kimbap. In South Korea, kimchi making is a communal culture. In the early days, in the cold months of winter, food was scarce and people struggled to get by. Korean mothers, thus, marinated and fermented seasonal vegetables available in the summer so that they could be stored for winter and then be consumed with plain rice. The custom today is that, households in Korea, in the months of November and December, make their own kimchi and then store them for the freezing season. Kimbap, on the other hand, is eaten as a snack of sorts. Kimbap is leftover rice wrapped in seaweed with an assortment of condiments and vegetables.

The culinary class focused on recreating this very essence of Korea. With instructors at each table, there were tubs of ingredients, fish sauce, diced radishes, chili pepper, salted shrimp. Together, under the instructions, everyone huddled over their tubs and prepared a sauce of rice pudding, fish sauce, garlic and onions. Radishes and cabbages were added to this sauce. In this manner, kkakdugi (radish kimchi) and tongbaechu (cabbage stuffed kimchi) were prepared. Participants were also allowed containers and bojagi (a traditional Korean fabric) to take home their toil in a package akin to bento boxes.

Then followed kimbap. On straw mats, participants pressed cold rice in dried laver with carrots, strips of eggs, squid, pickled radishes and spinach. They were then rolled into a cylindrical shape and cut accordingly. Most ingredients were imported from Korea while some vegetables were grown in Nepal itself (from the seeds brought from Korea).

Also on display were some essentials of Korean food. Napa kimchi (water kimchi) and japchae (stir fried glass noodles) were up for tasting. They are some of the staples of Korean food and prepared by the Korean community in Nepal. Korean coffee, an array of spices, decorative items, sesame oil and various other ingredients were exhibited too. The instructors explained in lengths the significance of the ingredients and their roles in the making of Korean food. Although very different on the Nepali palate, they did remind one of the similarities in the different types of Asian cuisines.

In the end, participants shared fish cakes, one of the best-loved street foods in Korea. Skewered on narrow sticks, they are made of grounded white fish and potato starch. Served with a broth that has a mild sea flavor, this dish is best suited for the colder days. And the participants welcomed it enthusiastically in the chilly hours of the program’s conclusion. The participants left for their homes with not just containers of self-prepared fresh kimchi and kimbap but with smiles and appreciation for a culture very different and similar to that of their own.

Kwon Jin Sun, one of the chief organizers of the event, said that they were intent on hosting other such events in the future too. “The reception was better than anything we anticipated. Our participants were as enthused as we were and many have expressed their willingness to attend such events should we host more,” she said. Plans for cultural nights and other such events for promoting the Korean culture are currently in the works.