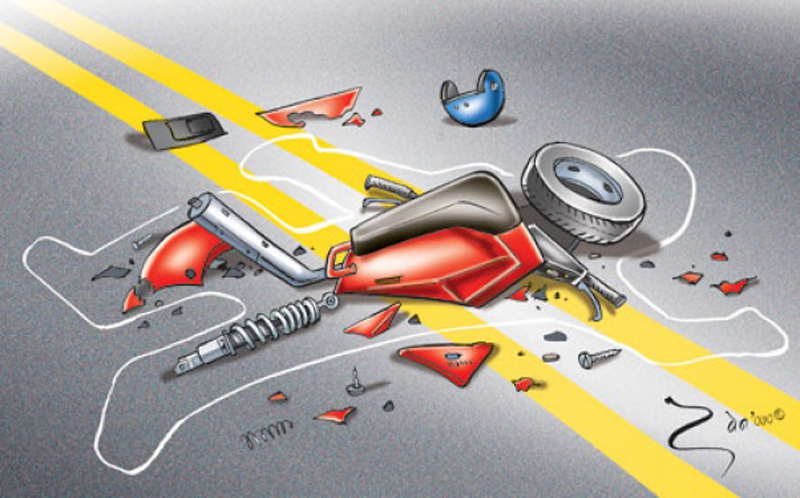 Road accidents capture our attention only when death toll is high. Death of one or two is conveniently ignored
At least five people were killed and 38 injured in separate road accidents in Parbat, Chitwan and Dhading this past Saturday alone. Such high daily human toll suggests that road accidents have become among the biggest contributors to unnatural deaths of Nepalis. In fact, Nepal has the worst record of road safety in South Asia. On an average, five people are killed in Nepal every day. Still the issue does not get much attention.

On the contrary, the news of air crash raises much hue and cry and the coverage continues for weeks, followed by many promises to improve air safety. Does this mean that the lives of the poor who travel by roads are comparably cheaper?

Again, road accidents are a problem right around the world. The World Health Organization (WHO) thus dubs road accidents a “hidden epidemic” as it claims 1.3 million lives around the world every year. Road accidents were the ninth leading cause of death in 2004 and could climb up to fifth by 2030, according to WHO. The situation is even more alarming in Nepal with more than 2,000 people dying from accidents every year. In the eastern region alone, 446 people were killed in 2014.

Road accidents capture national attention only when the death toll is high. Death of one or two persons is conveniently ignored. The most recent big road accident occurred in Kavre on August 15th, in which 27 people were killed. Another bus accident in Trishuli on August 26th claimed 22 lives; one in Arghakhanchi on August 27th took 11 lives. These incidents came to light because the number of the dead, in each case, was high.

Various stakeholders interpret the accidents to suit their interests. Traffic police attribute 90 percent of road accidents to transport syndicates.  But this is only partly true. Other factors such as over-speeding, overtaking, carefree pedestrians, drunk-driving, overload, jay-walking, bad roads, dilapidated vehicles and lack of public awareness are as much responsible.

The speed limit in Tarai is 60 kmph but over 98 percent drivers whizz at over 80 kmph.

Road is a battle ground for space among drivers, two-wheelers, pedestrians, animals, porters, and what not! Further, the breadth of the roads is small and their conditions poor.

Western countries take speeding seriously and sophisticated CCTV cameras are installed along major roads to monitor traffic rule violations. If anybody exceeds the speed limit, they will be punished, including the royalty. Princess Anne, the daughter of Queen Elizabeth, was fined £400 for exceeding speed limit in London in 2001.

Indiscriminate overtaking is another major cause of accidents. Drivers overtake even though the road can barely adjust to big vehicles side by side. Likewise, it has become common for motorbikes to overtake from the left. Then there are carefree pedestrians.

Pedestrians do not bother to use the zebra-crossing and they conveniently ignore the horns.

A Master’s-level English student shared with me a shocking experience. “I was walking bang on the middle of the road in Maitighar area,” he said. “I saw a red car approach. I would not step aside. It was only when I saw Bhuwan KC at the wheels did I move aside.” This reflects the kind of thinking of most pedestrians in Nepal.

Road accident is a matter of grave concern for Western countries. So they don’t comprise road safety. Driving instructors as well as the traffic police give strict directives to learners from day one. There are no such steadfast rules in Nepal and even when there are some rules, they are almost universally ignored. So what can be done?

The government, in coordination with concerned stakeholders, must undertake an intensive public awareness campaign on traffic rules. Side by side we need strong legislation to fine jaywalking, overtaking and speeding. Not only the drivers, the pedestrians should also be fined and made to pay for their action. Surprisingly, in Nepal, the drivers are always punished, even if they are innocent and it is the pedestrians who have caused some accident. The government must then include road safety in school curriculum.

Time has come to take road accidents seriously and bring some order to our unruly roads in order to prevent thousands of deaths every year.

Many working professionals confess that the monotony of everyday life can slowly start to become draining and tiring. You go... Read More...