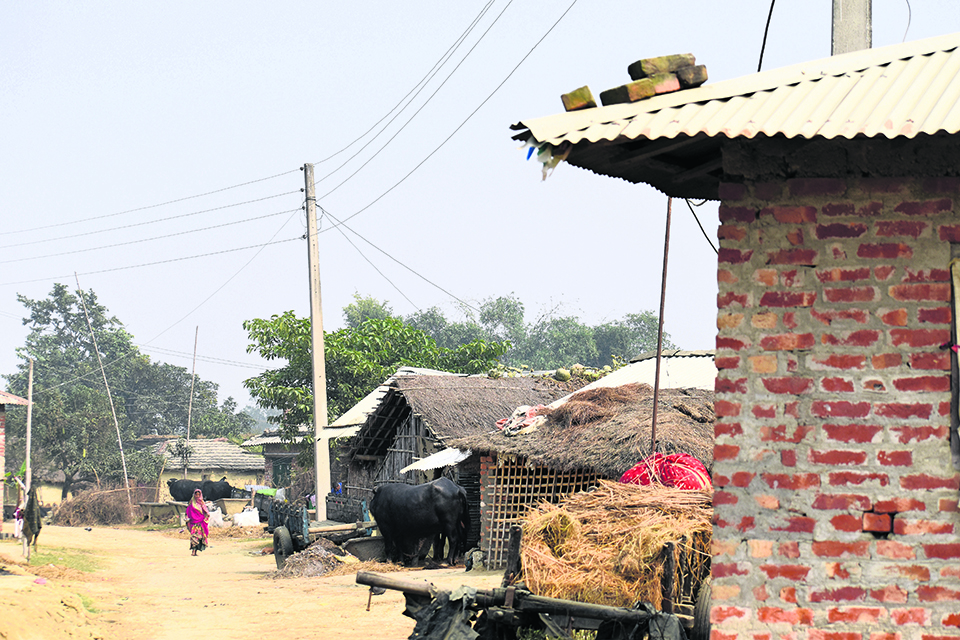 Mithilesh Yadav/Republica This photo taken recently shows electricity poles installed on the edge of the road widened recently by the local government in the Batuwatol village of Siraha.

SIRAHA, Dec 2: Last year when some people were installing an electricity pole near his house, Satelal Yadav, 71, was surprised. He had never thought that electricity would lighten up his village some day. "I grew old using oil lamps. Later people brought emergency lights which works through battery, but only a few people had it," said the local of Batuwatol village of Siraha. "I never thought that I would get to see electricity in this village in my lifetime."

Soon after the poles were installed, some other people came and linked wires to Yadav's house. The first day when this happened, he was overwhelmed. The staffs were wiring in his neighborhood as well. 'The villagers that day did not follow their normal routines.

"Everyone was waiting for the evening, to lit lights in their house. They had fixed bulbs at a few houses in the first lot," Yadav narrated.

This time as well, during the local level election, candidates made the same promises. They said that they would bring power and roads in all rural settlements. Yadav did not have faith in such talks but still he cast his vote. As soon as the local government came into existence, things started changing before his eyes for the good.

The credit of 'lightening' the village goes to the local level. According to Yadav, he was fed up of promises leaders would make during elections. "I have seen many elections in my life and candidates would always lure us stating two things. Road and electricity. But our village and many other rural villages here never saw that. We always felt cheated," Yadav stated.

This time as well, during the local level election, candidates made the same promises. They said that they would bring power and roads in all rural settlements. Yadav did not have faith in such talks but still he cast his vote. As soon as the local government came into existence, things started changing before his eyes for the good.

"They did not just brought electricity to the village, but they also connected this village to the road network," he reported.

In the last one year, several villages of Siraha and other parts of Madhes have seen such changes. Due to the people's pressure, the local authority has been working in those fields.

Also according to Bhup Narayan Yadav, 75, of Gargama village the post-election experience remained different this time. 'The local body seemed to have understood people's plights.'

"I had also not thought that I would see power in my village in my lifetime. But I was proved wrong. The local government took initiatives and changed things," said the elated man. "The leaders kept their words this time."

Bhup Narayan loves to call it 'coming true of a long cherished dream'. People of his generation actually got old dreaming of power in their village.

In Bhup Narayan's village there are around 500 households. And all those houses are enjoying power these days. "It makes your daily life much easier, much different. But we lived our life, amid thick and thin, we are happier actually for our children, the future generation," he said.

Following the power, several electric services have been introduced in the village. For instance, electric rice mills and cyber centers have been opened. Farmers have started using electric tools in their fields. Cattle are getting better care due to electric heaters and other technologies.

"Power does not mean just light. It impacts in multiple fields. No question that our daily life has become easier and faster, we are equally making use of power for agricultural purpose," said another local of the village, Bijanath Yadav.

Roads have been equally excited the rural populace. After the local government took the charge, road networks have been widened letting people do better in their businesses. Bairiya Patti Rural Municipality, for instance, did not have proper road network to reach from one to the other village within its border. The Rural Municipality with 22 villages always remained backward due to the lack of transportation services. However, local representatives have now been fast constructing, repairing and widening the roads. And this has brought smiles in people's face.

"I had never imagined there would be a nice road in our Dalit settlement. But now it is right before my eyes," said Tetari Sadaya. "We all are so overwhelmed."

The road she referred to was widened and repaired six months ago. This had made her life far easier. "I carry crops to sell in the market. Sometimes, I carry vegetables. Earlier traveling was a huge hassle for me. But now, it's a joy."

A local farmer Dipendra Sah did not have a different version to share. He is also making greater profit from his agricultural products these days due to nicer roads. "In the past, there were no roads here. So, we had no means to market or sell our products immediately. Now it is not so," he said.

Meanwhile, Santosh Sah, chairperson of Bairiya Patti Rural Municipality stated that power and roads have made positive impact in the economy of the towns and villages. "Roads and electricity are the basics. Yet, we didn't have it. Now, we are extending irrigation facilities. Farmers have become smarter; they are trying modern technologies for farming. Huge changes have come here," he said. "We spent last few decades fighting for decentralization and federalism. Now, we have local government to address people's problems. We are committed to bring happiness in people's life."

It is not that all representatives reflect the same spirit, according to Bhup Narayan, some local bodies are doing fair job while some others are entrenched in corruption. "We have seen some changes in Madhes villages due to local bodies, but not all bodies are able to deliver as expected," he noted.

DPHO officials spending days under sun in lack of work

ILAM, Feb 16: After restructuring the government in the new federal setup, a large number of government bodies based in... Read More...

SIRAHA, Sept 6: After struggling with the lack of transparency, mismanagement, irregularities and various other difficulties for almost two decades,... Read More...

CHAUTARA, Jan 28: A total of 581 villagers received citizenship documents through the Integrated Mobile Camp at Thakani VDC of... Read More...