FinMin says not to worry, but brainstorm to tackle trade deficit 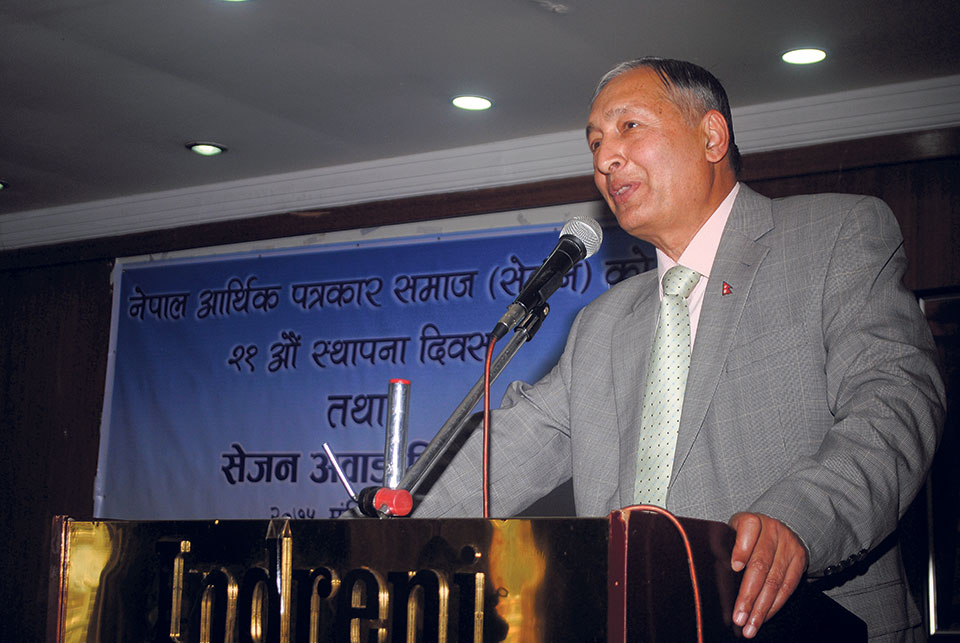 Minister for Finance Yuba Raj Khatiwada addresses a program organized on the occasion of 21st SEJON Day in Kathmandu on Saturday. Photo: Republica

KATHMANDU, Dec 2: Finance Minister Yuba Raj Khatiwada has said that there is no point of being worried about trade deficit, rather it is a time to discuss ways to come out of it.

Speaking at the 21st anniversary of the Society of Economic Journalists Nepal (SEJON) Minister Khatiwada said that trade deficit cannot be analyzed on the basis on import only.

“Indeed the other part of trade deficit is export,” he said, “This is not a time to criticize increasing imports, rather this is a time to discuss and brainstorm to find a way out.”

While the country is expecting eight percent economic growth, investment worth at least Rs 1,400 to 1,500 billion is needed.

"At the present moment, two third of our imports is comprised of heavy equipments, machines, raw materials and other construction materials," he said, adding that imports are causing two third of the trade deficit.

"Either we accept the situation and discuss ways to sort it out or we just ignore it saying that we don't need tourism development, energy generation, and other productive industries," he argued. He also requested the media to raise issues about the rising imports of products such as vegetables, fruits, paddy and others.

"For a country like Nepal, both import and export are necessary equally," he said, adding: "Government's definition of development is to bring all productive sectors together and make them work together for sustainable and effective development."

"Competitive capacity of the country was reduced due to the armed conflict, and further damage was done due to lack of electricity," the minister added.

"At this moment, the government has given high priority to tourism as an income generating sector," he said.

Addressing the 21st-anniversary event of SEJON, Finance Minister Yuba Raj Khatiwada thanked the media for raising issues of Sikta Irrigation Project with high priority. The Sikta Irrigation Project of Banke district of Province 5, with a capacity to irrigate almost all the low lands of the district, was first conceptualized in 1975. "Sikta is the first irrigation project that the government initiated without any donor support. In 2003, the government had allocated Rs 500 million for the project," the minister recalled.

“However the project got stranded later on," he said, adding: “And I really appreciate that the Nepali media has raised this issue with high priority.”

There have been several in-depth media stories about Sikta due to which the government is being continuously reminded to become responsible toward the project, he added.

Nepal’s trade deficit grew by around 25 percent to Rs 1.26 trillion in first 11 months of current FY

Grow your own plants

Importing fruit plants for commercial production should not be encouraged because our quarantine and monitoring systems are weak ... Read More...

I will try to fulfill my responsibilities with sincerity: Minister Jhankri
12 hours ago

Two killed in house collapse in Doti
5 hours ago

Ruby Khan and govt strike deal, probe panel to be formed
5 hours ago

One buried to death in landslide
7 hours ago